This term I have been reading a book called Mr Stink. It was a brilliant book. The book was partially humorous and partially emotional. Chloe who is a 12 year old girl and Mr Stink who is a 60 year old man I felt as if their bond grew through out the story. My favorite part  is when Mr Stink gets invited on to a show called question time and he embarrasses himself (in a hilarious way) and embarrasses mother who is Chloe’s mother. Overall I really like this book and I like the way the authors styled it and I like the illustrations that the illustrator made. 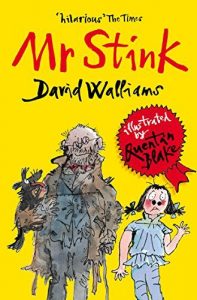 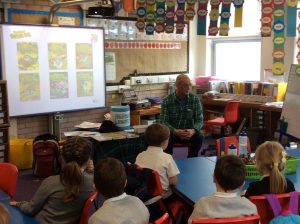 On Friday 28th of September 2 authors came to Port Ellen primary. In p4-7 class the author was called Janis MacKay and she came in and did some fun writing activities with the class. The first activity was we had to continue a part of a book she read called The Reluctant Time Traveler.  After we had written a few sentences we had to pass our work to the person on our right and then they had to right a sentence or 2 but continuing in the same style as the other writer. It was a fun little activity and she told us about how she became a writer and different places shes lived and questions linked to them. She also told us stories about how she was inspired to become a writer and what gave her ideas on what to write about.

On Friday 28th of September in p1-3 they had another author called Alan Dapre and he was talking about his book called Porridge the Tartan Cat.  P1-3 did a little activity where Alan read them a segment of the story then they got to make up their own characters and show what the character was feeling.  For example people drew spotty guinea pigs, unicorns and different patterned cats and things like that.

The Wind Turbine
The wind turbine that we visited was up the high road at Castlehill. Mr Dean told us that the wind turbine was 63 meters tall, including the blades. We had to go up some stairs and hold onto the railing due to heavy wind. Mr Dean (the chairman of Islay Energy Trust) showed us inside the turbine and what everything does. We learned how many kilowatts and how much energy it’s producing. It also told the wind speed and how fast the blades were going. The electricity that is produced from the turbine is sent to the national grid and is then sent back to Islay. by Harmoni & Orla