Sustrans Outside In provides fun ideas and inspiration for parents to bring education, health and wellbeing activities into their home. 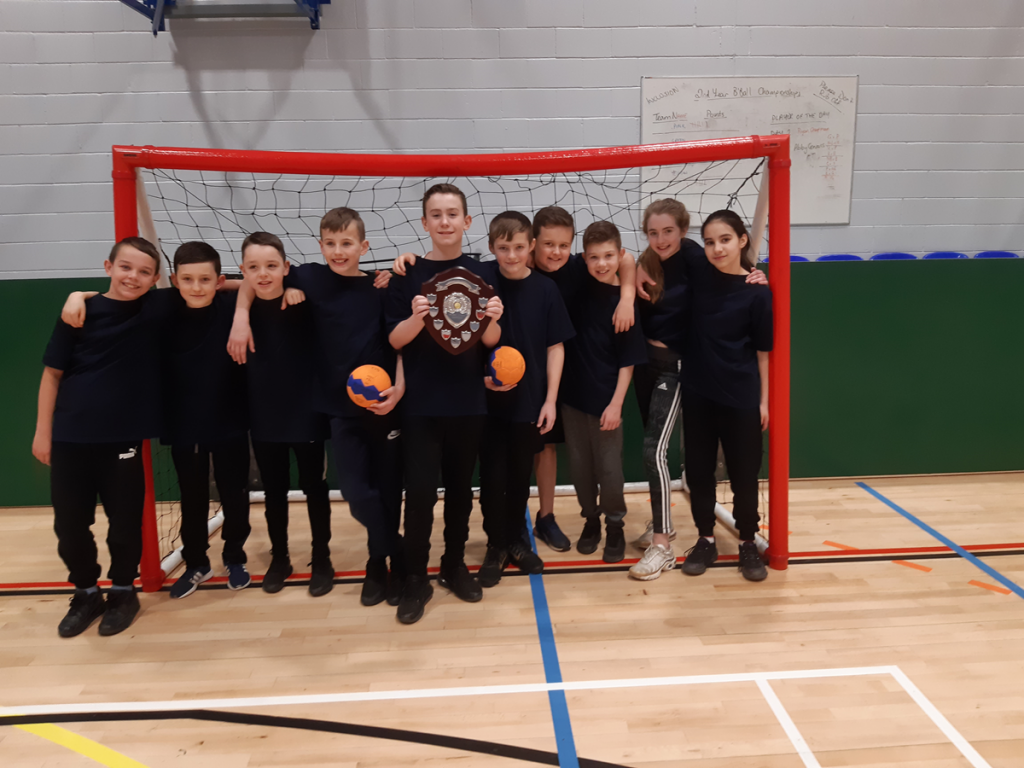 Meet the victors of the West Lothian Schools Handball Championship – Carmondean Primary School.  Now they get to represent West Lothian in the Scottish finals on 27th March at Ravenscraig Sports Facility, Motherwell.  Good luck team – we are so proud.

Yesterday, every Carmondean PS pupil performed to an invited audience in our annual Scots Afternoon. The event was opened by our Primary 7 drummers and our piper, Leo Brown, who piped in a haggis, which was addressed by Jamie Scott and Bendi Toth. Our guests were treated to song and poetry from all stages in the school and served up a Scottish lunch by our Primary 7 pupils. The whole prestigious event was organised and run by the Senior Challenge Group, who also put together a unique 2019 Calendar which our guests received as a gift. The comments received from guests as they were leaving told us that Carmondean is well respected in our local community and that our children are all stars.  Well done Senior Challenge Group and everyone else involved in making the event a great success.

Three Carmondean pupils helped the Cluster Brass Band to win a Gold Award at the Scottish Concert Band Festival recently. A huge well done to the band and to our players and we wish them well for the Scottish Finals at Perth in 2019. 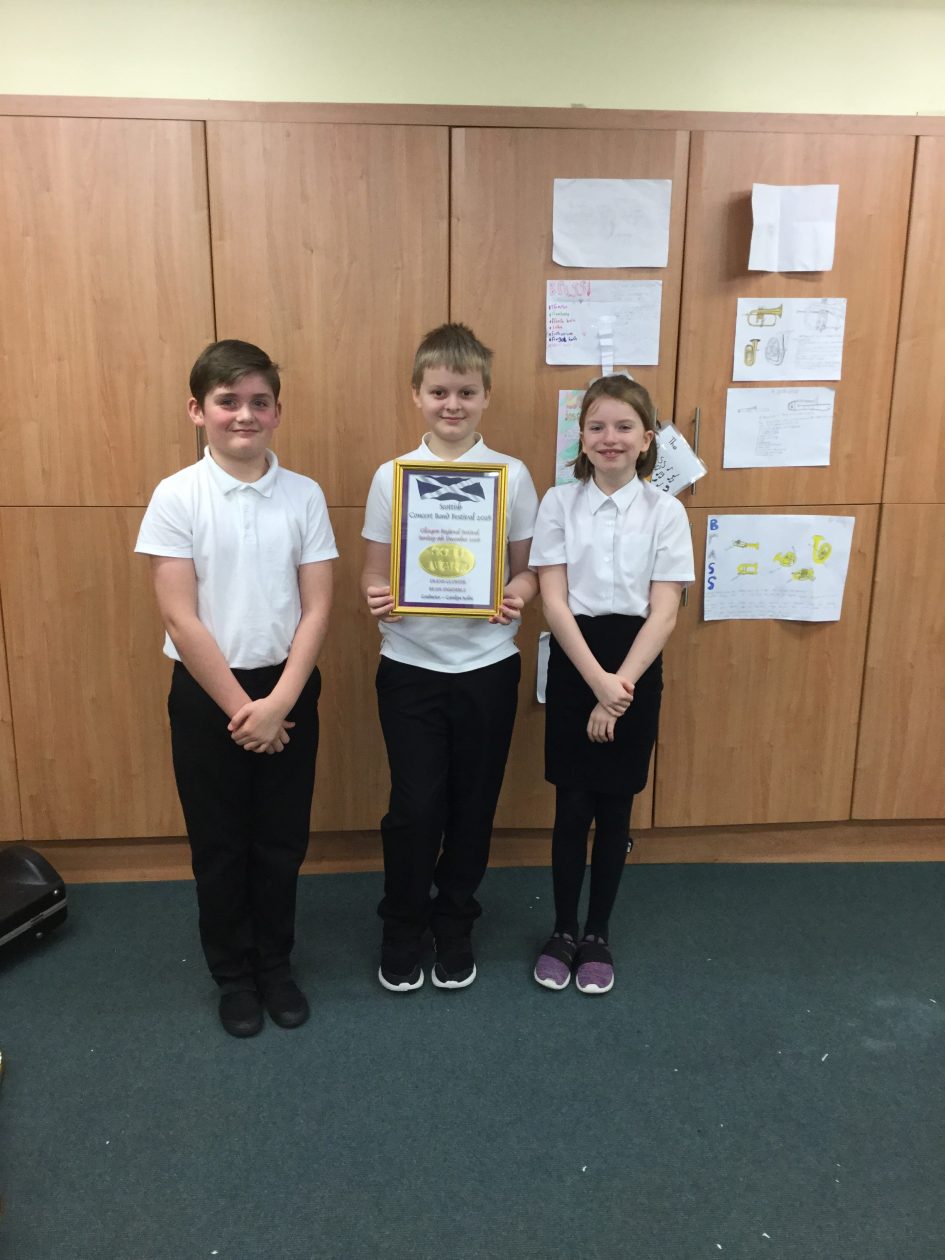 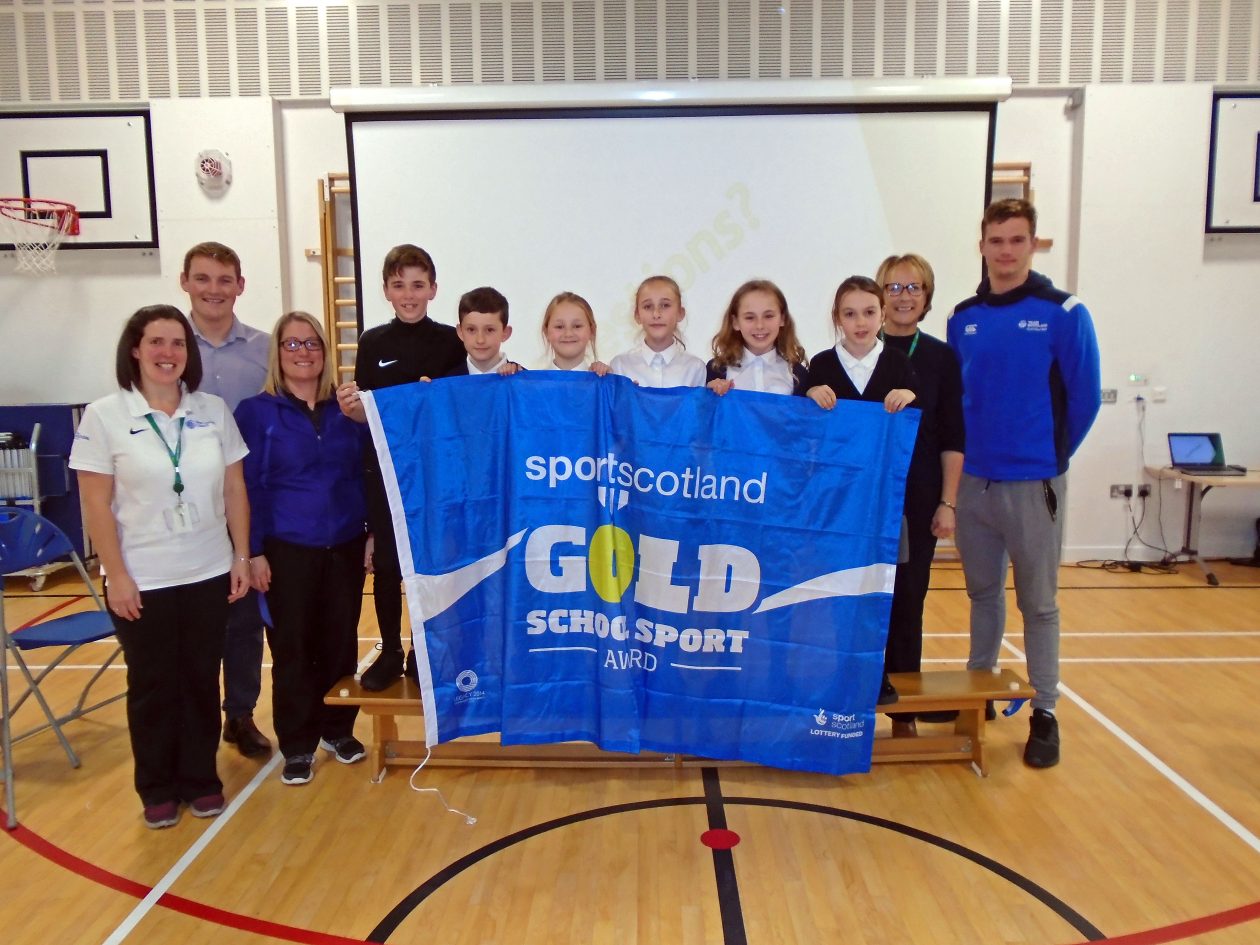 Today, Carmondean pupils and staff and a few very special guests were present at an extraordinary assembly where Mr Ferguson from Sport Scotland presented the school community with the Sport Scotland Gold School Sports Award in recognition of the work done in and outside of school to promote sport, physical activity and health. This prestigious award was the result of a lot of hard work by our P.E. teacher, Mrs Ferguson, and our Sports Committee, made up from pupils in Primaries 5-7. The award is valid for three years, after which time we will have to apply again. Who knows, maybe next time we will earn Platinum!  Also in the picture is Mrs Sheila McEwan (West Lothian Council Sports), Mrs Angela Coulter (Active Schools Coordinator) and Mr Craig McLean, our very successful partner elite athlete (Commonwealth and European Championships Bronze Medal Winner in Swimming). Below is a short video showing the kinds of activities and the various partnerships we were involved in to gain the award. A huge ‘Well Done’ to Carmondean.

Following on hotly from our P6 Handball team’s success in reaching the West Lothian League finals last week, our P7s topped the scorers at the West Lothian Sportshall Athletics on Friday. We’re definitely on a roll – keep it up sporty kids!

We had an outstanding display of gymnastics prowess at our Gymnastics Showcase last Thursday, 01 February. The invited parents who attended were suitably impressed with the routines across the spectrum of abilities from gymnasts in training who go to gymnastics clubs, etc., to children demonstrating the weekly Gymnastics lessons routinely taught in PE. Special thanks to Mrs Ferguson, our PE specialist teacher, who organised the event and trained the children – it was well worth it!

More sporting success for the incredibly supple and talented pupils of Carmondean P.S., who almost swept the board at the West Lothian Gymnastics Competition this morning. Two Carmondean teams  took the Level 2 Team Gold and Team Silver, while another team took the Level 1 Bronze. There was individual success also with one Carmondean pupil taking the Level 1 individual gold and another taking the Level 2 Individual silver.  You could say we were turning somersaults when we heard of our teams’ successes. Well done everyone, and an especially big well done to Mrs Ferguson our P.E. specialist, who coached both teams – what an asset to our school.

Our Primary 6 children have been involved in an exciting activity – to design the next Red Nose for Comic Relief 2019. We had loads of great ideas, but our school captains selected these six as the ones going forward into the main competition. Well done to everyone who took part, but especially our winners.

At today’s Primary 6 West Lothian Primary Schools’ Cross Country Running event, Carmondean children were flying.  We took 1st, 2nd and 3rd places in the Girls’ race and 1st and 2nd in the Boys’ race, as well as chalking up many other highly placed finishers in both races.  It seems the lunchtime running club run by Mrs Ferguson, our P.E. Specialist, is paying dividends.   A huge ‘Well done!’ to everyone who took part in the race, but especially to our successful podium finishers pictured below.

I was working away quite happily this morning when I was invaded by a group of children who wanted to share their successes outside school. This is an area we want to hear more about from all classes and our Pupil Parliament came up with some useful ideas for sharing these kinds of successes.  This morning, we celebrated some pupils’ contributions to the Deans Gala Day, including the Pageant, the Football and the Relay Races, where Carmondean had some great successes (First in Football, First in Girls’ Relay and second in Boys’ Relay. The Gala Queen, Rebecca Scott, is also a Carmondean Pupil, and we had another seven children involved in the official crowning).

The other successes reported were:

A huge well done to everyone and we hope to hear more about successes outside school next session.

What are we blogging about?