Mr. Houston gave us a very exciting ending to our topic about moving toys.

We explored different ways to arrange numbers of people living in houses in a street today. Each house had to have at least 2 people in it and all 12 people needed to have a house to live in.

Did we manage to solve the problem correctly?

Can you think of any other ways the people could be arranged in the 4 houses?

This week we have been writing a set of instructions about getting ready for school. We drew a sequenced picture plan first then we matched our writing to the pictures. This was challenging for us but we persevered.

We have been earning Golden Time all week and today all of Primary 2 played outside in the Infant playground. It was exciting to play with our friends  and to make new friends along the way.

The best fun was using the playground chalks and making up really interesting stories about castles, volcanoes and strange creatures- we got a bit messy too!

In groups we have been exploring how toys move.

They can float, roll, build, be pushed, be pulled, fly, walk and talk.

We learned about these Forces by reading  a set of non-fiction books about toys and how they move.  We enjoyed exploring these books and had good discussions about the photographs. 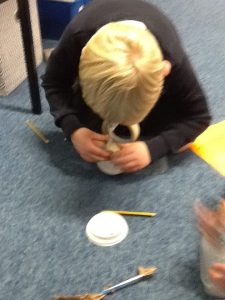 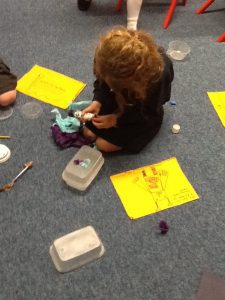 After exploring the forces that help toys to move we designed our own toys that move.

We have then put them to the test to see if our designs are strong. We learned that cardboard is not a good material to choose if we want our boat to float- it goes all soggy.

A lesson we also learned from this activity was that we do not get upset if our design does not work. We persevere, improve our design, patch it up and test it out again.

This week we are telling the class about our toy models and answering  questions about them.

Primary 2 have been working hard learning to add within 20. We went outside and we used chalk to write sums with a friend. Some of us found it quite tricky but we tired hard and we could do it! We had a lot of fun!

We have been listening to songs to help us count to 10. We love the dancing worms!

Primary 2 have been designing and making rolling toys.

We decided the best shape for rolling is a circle but, hexagons can work well too. We thought about how a 20p and a 50p roll even though they are not circles.

First we explored a marble run and predicted that the small marbles would roll down the run and the ramp the fastest. We were so surprised that in four out of four attempts the big marble won the race!

Our teacher was very surprised that half of the groups managed to make their toys roll. She had predicted that most of us would glue and stick the wheels. However, a few groups made moving axles so, the wheels turned round. The toy designs that rolled the best were often the simplest designs.

Please do not bring in any ,”Pokémon” cards to school.

They are now banned from Kingsland Primary.

Keep them safe and have fun  playing with them  at home.