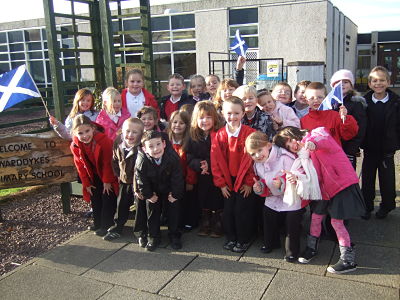 Happy new year to all our pupils, parents and anyone else who is visiting.  We hope you all have a brilliant year ahead.

This is the picture Mrs Stewart had made into a postcard. We will be sending them to each of the 50 American States in the New Year as part of our postcard exchange.

This slideshow does not show on Angus authority websites but can be viewed at home.

Click on the bottom of the photos and uncheck to hear the music.

We blogged about sending our letters to Santa a couple of weeks ago.  Here is a slideshow of the Superstars posting them.  Let me know when you get a reply by posting a comment, P3S.  Hope you are enjoying the first full day of your holiday.   Mrs Stewart 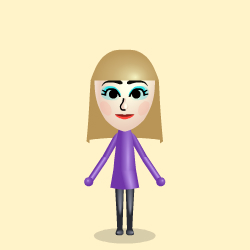 We made avatars in our computing lesson this week. Avatars are images which can be used to identify yourself online instead of using your own picture. We will be using the avatars we have created in some of our work next term. Click on the link below to have a look.

You can make one for yourself!

Today we all watched the dress rehearsal of “Christmas with the Aliens.”
The show is tomorrow and the performance will be shared with parents.

Here is a picture of some of the children from our class who have parts in the show.

We are all taking part by singing the songs. Our class thought the show was super. We have great singers and actors in our school. We think the parents will love it!

The snow has just about cleared, but the weather forecast is saying we are about to get lots more!

Today we made some bird feeders and bird snacks in class. We know that winter is hard for the birds in our garden when the snow is deep on the ground.

To make the bird feeders we mixed lard with sultanas and bird seed. It was very messy but brilliant fun. The lard was a bit smelly though!

When we had mixed it thoroughly we packed it into plastic cups. We had already threaded some string through the middle to hang them up. We put them in the fridge to harden.

We also made some bird snacks by covering fir cones with lard and then rolling them in sunflower seeds.

Later on in the morning we had a special eco assembly and Rhys, Archie and Taylor showed what we had been doing to the rest of the Primary 1, 2’s and 3’s.

Phew! What a busy morning!

We have been learning about angels with Mrs Smith in RME. We learned that they are often messengers in religious stories.

We made these angels with Mrs Stewart using our handprints for the body and wings. Don’t we look angelic!

This week we made some winter ice art to hang on the trees in our school garden.

Mrs Stewart saw this fantastic idea on this website:

There are lots of ideas on this site for children and schools to do during the various seasons.

On Tuesday we went into the forest behind our school to collect natural objects such as pines cones, leaves and twigs. This was great fun! 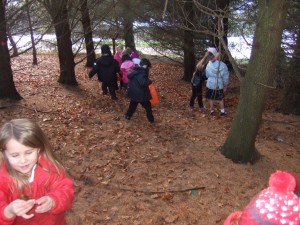 When we got back to class we sorted them all out. 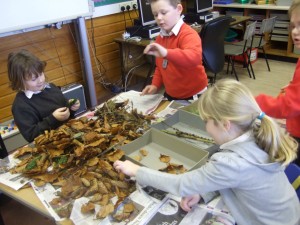 On Wednesday we chose some of the things we had collected and put them into a cup and and topped it up with water. We also put in a piece of string as a handle and a bit of glitter for some festive sparkle. We then put them in the freezer.
On Thursday they had become beautiful pieces of winter art which we could display in our garden (until they melt!). We think they are beautiful. 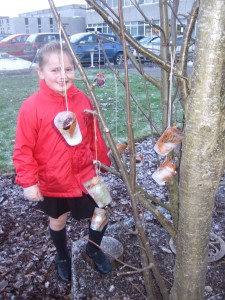 Today we had our Christmas Carol concert for all our parents and friends. Our class sang the “Cat and Mouse Carol.” We were a wee bit nervous but Mrs Stewart says that we sang beautifully and we got a big round of applause at the end!

This has been a really hectic week with all the practices going on for our Christmas school shows. Nevertheless, as we are an art loving class, we still managed to fit in some this week.

We made these pictures by cutting out snowflakes from white paper and sticking them on to black card. We then used our oil pastels to draw snowflake shapes in the negative space. We then added some sparkly details with glitter glue. Right now we are waiting for the glue to dry but we think they will make a fantastic display next week.

Today we wrote our letters to Santa. We are learning the correct layout for a letter and how to address an envelope correctly. We also had to remember to use our best handwriting and spelling as Mrs Stewart said Santa is very fussy about these things! After we had finished we went to post them. We will be checking our post at home every morning for our replies. 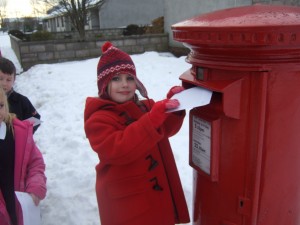 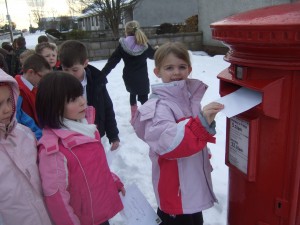