We are looking for a class in either Australia or America to host our Flat Stanley for our coming topic. If you would be interested please get in touch.

Our school year, here in Scotland, ended on the 1st of July. We are now off on holiday for 6 weeks!!

We have had a great year togther and have enjoyed sharing our learning and achievements with you.

A big thank you to all the parents who supported our blog. Thank you also to all the other children, teachers and everyone else who got in touch with us.

Primary 3S are moving on to Primary 4 and will have new teachers. They have been a great class and I will miss them.

Thank you again to everyone who joined us in our blogging journey this year.

We had our whole school prizegiving ceremony this morning. Parents were invited to attend.

Here are the prizewinners from our class. The prizes were for academic and sporting achievements. 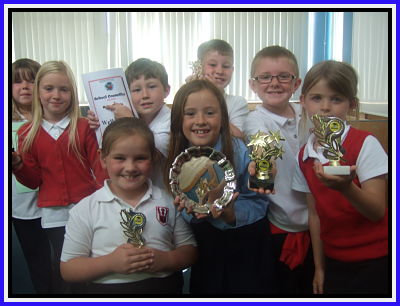 Well done everyone. We are all very proud of you.

Today the Superstars had their last school trip of the year. We visited the Scottish Deer Centre near Cupar.

We went on the bus with Mrs Stewart, Mrs Campbell and Mrs Smith. The weather was lovely and sunny all day (not like yesterday!).

There were lots of things to do. First of all we went around and looked at all the animals. There were lots of different kinds of deer, wildcats, goats, sheep, wolves, otters and owls. We were able to feed some of the deer with special food.

After we had seen the animals we went and played in the outdoor wooden fort and play area. Then we had a wee break and had our lunch on a grassy area beside the owls and birds of prey.

Last of all we went pond dipping. We used special nets to fish for pond creatures. We put them in little trays of water so that we vould look at them more closely with magnifying glasses. We tried to identify them using a key.

We had a great day. All too soon it was over and we wished we could have stayed a little longer.

Thank you to everyone at the Centre for looking after us.

The Superstars visited the Signal Tower Museum in Arbroath on Friday as part of their topic on lighthouses.

The buildings where the museum is now housed used to be the accommodation for the lighhouse keepers of the Bell Rock. They lived there when they were on shore, with their families.

The museum was recently refurbished and was officially opened again last month by Princess Anne.

We were shown around the museum by Eileen and she told us lots of facts about the Bell Rock and told us more about the artefacts on display. We were also able to watch a film about the construction of the Bell Rock. We would like to say a big thank you to Eileen for making it such an interesting visit.

Click here to be taken to Signal Tower website. They now have a webcam which you can move about to look at the lighthouse and the harbour!

Over the past year we have become friendly, through our respective blogs, with Primary 3 at Dunipace Primary School in Falkirk, and their teacher Mrs Crerar.

They have a fantastic blog which we love to look at:

We decided that we would like to work together and decided we would produce a guide to learn more about each other. We thought we would use a Glow wiki to do this. A wiki is a kind of collaborative website which more than one person can contribute to, even if they live in different places, so we thought it would be perfect for us!

Dunipace have added lots of pages to the wiki. We particularly liked their Simpson avatars and their video guide. You have done a great job Dunipace. Well done everyone.

You can have a look too. Click here. and then click on the Dunipace tab to see all their hard work.

This afternoon we invited our parents to come in and help us make our lighthouse models.

We were planning to make them a wee while ago but all the Pringles tubes we had collected had been thrown out when the school was being tidied, so we had to start all over again!!

We made a base for our lighthouse using an old shoebox lid or half of a cereal box. We painted it and covered it with blue tissue paper for the sea. Then we made our lighthouse by covering the crisps tube with white paper and added red or black stripes. We used mod roc to attach the lighthouse to the base by packing it around the base of the lighthouse to make rocks. We added a plastic tub to the top to house the light.

We will be finishing them off by painting the rocks and adding our electrical circuit so our lighthouses have a flashing light. We think we have done a super job, don’t you? 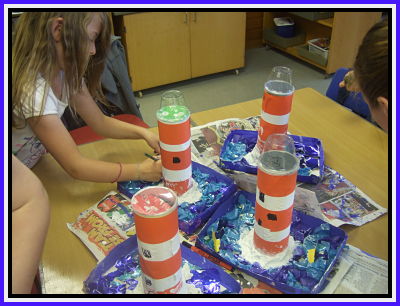 After we had all tidied up we were able to eat the fruit kebabs we had prepared that morning. Our parents really liked them and we think some had more than one!

Thank you to everyone who came.

We are having a Health Week at school.

On Monday we designed a healthy lunchbox for Mr Grinling, the Light house Keeper, as we did not think his diet was very healthy!

This morning we made some lovely fruit kebabs to share with our parents when they visit us this afternoon to make our lighthouse models.

We talked about the importance of good food hygiene. We washed our hand in hot soapy water to kill any germs on our hands and then used special hand gel just to make sure.

We prepared and washed out fruit and then put it onto wooden skewers. We used pineapple, strawberries, grapes and melon. Some of us had never tested fresh pineapple before and thought it was lovely – better than the stuff in the can. 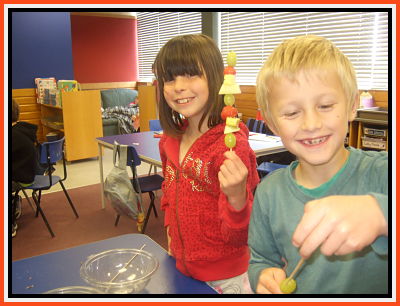 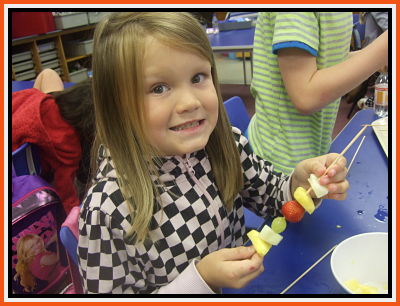 We think they will be delicious.

We were invited to attend because we had done such a super job with our school assembly about beach safety and also with our class fundraising efforts for the RNLI. The RNLI knew all about us because Allan, who is the lifeboat mechanic in Arbroath and who attended our assembly, was really impressed and passed our video on to the RNLI education department who also liked it. Thank you, Allan!

We went through on the train from Arbroath and had our lunch with lots of other people who were also receiving awards. We were the only school there and lots of people spoke to us. We met some ladies from Arbroath who were also there. One was Mrs Campbell’s mum, Mrs Fulton, and another was Lucy’s (from our class) granny.

We were the first to go up on stage to get our award. While we were on stage they showed a picture of our whole class on a huge screen behind the stage. The awards were handed out by Sir Andrew Cubie, Chairman of the Scottish Lifeboat Council, and Coxswain Michael Ian Currie of the Mallaig Lifeboat Crew.

Thank you to everyone, especially Allan and also to Rachel, from the RNLI Head Office, who was very helpful in making arrangements for us to attend the ceremony. We had a great day.

Today our school had Sports day. It was cancelled last week because it was raining, so we were very glad that the weather was nicer today so it could go ahead.

Primary 1 to 3 had their sports in the morning and the rest of the school was in the afternoon. Parents were invited to come along an cheer us on.

We had running races, an egg and spoon race, sack race, football dribbling and skipping races. Finally, we had the House relay race which Grampian won.