We studied the design of the Scottish Parliament Building and recreated the MSP Pods.

We made and cooked delicious pancakes.  We could choose butter, jam or Nutella to have on top.  They were delicious. 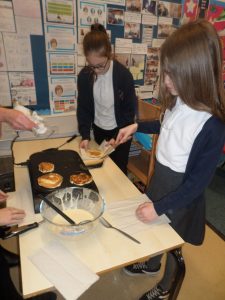 This morning we celebrated Kingsland’s 10th Birthday in the new school building.   We had mixed classes from P1 to P7 and were all with different teachers.

I enjoyed designing and colouring a cake for the school’s birthday.  Rana

I enjoyed the musical corners game even though I was the first one out.  Rayyan

I enjoyed playing charades at the end of the session.  Oliver J

I liked being in a mixed group and made a friend called Matthew.  Thomas

I was with Mrs Collins and enjoyed flipping and fish along the corridor.  Sam

I enjoyed playing charades and acting out Beauty and the  Beast.  Charlie 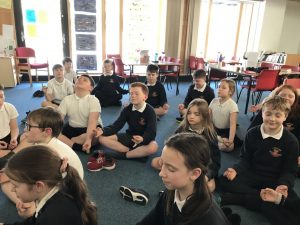 Primary 6a have been learning about Buddhism. We have discovered that Buddhists meditate. This is a quiet time when you can clear your mind and reflect on life. Mrs Harrison loved this time as it was so quiet!

Primary 6a finished painting their clay models and tiles this week and they are very proud of their finished work.

Click on one of the pictures to see these up close.

Today we had a visit from Iain Clark who works for the Scottish Parliament. We had a great morning learning about how the parliament works. Here are some of the things we were learning about…

Alfie- The difference between government and the parliament.

Lewis- The different parliaments and assemblies that formed in 1999.

Murray- This year the Welsh Assembly will become a parliament.

Angus- What an individual candidate was.

Zak- When there is a draw between voting on laws the Presiding Officer must say no to the passing of the law.

Robert- About devolution and how in 1999 the powers were split across the UK.

Lauren- The assembly has to ask the UK parliament if they want to put a rule in place.

Jack- Since there are so many people in London they have their own assembly but their focus is on finance, policing and transport.

Elise- A 1/3 of Scottish budget goes on to health services.

Connor- 8 MSPs can help us in the Borders to tackle issues that matter to us.

William- The most important person in parliament is called the presiding officer. He is called Ken MacIntosh.

Jess- The Scottish Parliament have a budget of 42 billion.