Remember we are holding our Art Exhibition at 2:30pm tomorrow

Remember we are holding our Art Exhibition at 2:30pm tomorrow

Come listen all you gentle folk, the praises I’ll proclaim

Of a wee bit sonsie terrier dog, and Bobby was his name.

He wouldn’t leave his master’s grave though it was against the law.

For 14 years and more he stayed, through rain and sleet and snaw.

Have you anything to say for yoursel

H H H and the wee dug wagged his tail

Each time the Beadle flung him out, he slunk back in again

And so they called the polis in, they said that dog’s a stray

We’ll take him to the Burgh Court, on a charge of vagrancy.

So the poor wee kids went round the doors, wi a wee collectin tin

Oh we can pay his licence fee, if you’ll put your money in

Then up and spoke the Provost man, no money need be found

For I’m going to make wee Bobby here, a freeman oh the town.

Have you anything to say for yoursel

H H H and the wee dug wagged his tail

And soon his fame spread o’er the land, they came from far and wide

To see the dog that wouldn’t leave, Old Jock his master’s side

His statue stands there still today to stop, us getting smug

It reminds us our most famous son, was just a wee bit dug.

We all had fun finding symmetry and  making symmetrical patterns.

What a super recitation Rowena gave with her goggles and scarf. Then underneath she had her train driver cap. We all enjoyed your performance at the Scottish Afternoon.

Fantastic T-shirts and a great presentation about Personal Space by Dean, Dylan and Adam today.

We have been learning about the Chinese New Year through Creative Dance.  Here’s a sneak peak of our masks for next week’s performance! 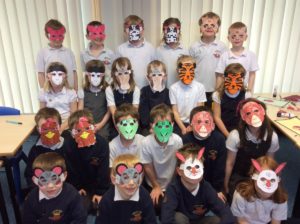 Our class have been very busy getting ready for our Art Exhibition next week.  We have been making lots of fabulous Artwork based on the designs of Charles Rennie Mackintosh.  We are looking forward to welcoming our families on Tuesday. 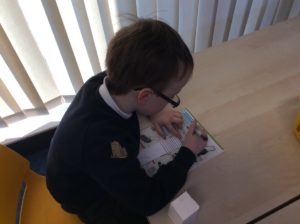