In session 2005-2006 a house system was introduced in Langloan Primary School.

Primary 7 were invited to take part in a competition to name the four houses and design crests.

The winning names were chosen by the Pupil Council.

The four Langloan houses are called:

A Primary 7 pupil chose these names.  The crests that he designed have been made and

are on display in our school gym hall. 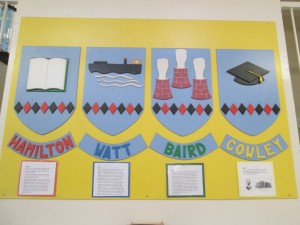 Each house has a captain and a vice captain that is voted by the pupils’ in our school.

Throughout the year, there are House Competitions and in June a House Cup is

presented to the winning house at our End of Term Service.

You can earn house points by:

Pupils’ earn bonus points for demonstrating responsible behaviour in all areas of the school and for wearing their house badges.