The following letter regarding attendance was given out to all pupils this week.

The ceremony will be shown on STV on Friday 7th December at 11.20pm  and will also be repeated on the Sunday  9th December at 4.00pm.

Hillhead High’s Winter Fayre will take place on Saturday 1st December from 10am to 1pm. See the flyer below for more details. Hope to see you there! 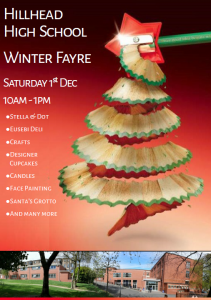 Next week is national Anti-Bullying week (12th-16th November) and there will be a number of things going on in classes and around school to raise awareness amongst pupils and staff.

The S6 senior leadership team will be delivering a presentation on ‘Respect’ and what it means to pupils at assemblies this week.

Some of the junior PSE classes will be doing activities focusing on anti bullying as well as some work in certain departments.

The S6 team will have some stalls in the foyer to display some information and to talk to pupils who want to know more. They will also be selling some merchandise to raise money for the Anti-Bullying alliance charity who do a lot of work in schools to teach staff and pupils about how to deal with bullying.

tips for children tips for parents

The S5 Prelim Timetable is now available to view.

‘HHS Remembers’project invites pupils, parents and the community to remember the Great War and it’s impact on our lives.

The project will take pupils into the trenches, bring alive the memories of former pupils who have fallen, investigate influential and inspiring people and reflect upon our own values and what it means to be kind, ambitious, have integrity, resilient and respectful.

Recently, the school was contacted by the Commonwealth War Graves Commission(CWGC) regarding a former pupil, Private Roy Douglas Harvey. Private Harvey was killed on 11th August 1918 during the Battle of Amiens. The inscription on his headstone, “My task accomplished and the long day done”, has inspired former poet laureate Sir Andrew Motion for his poem Armistice, which was commissioned by CWGC. Read more about Private Douglas, and Motions poem below.

The Amnesty International Group recently took part in Amnesty’s ‘Words that Burn’ national project, which encourages young people to explore and express human rights through poetry.
The took part in the ‘Make Difference in a Minute’ challenge and performed poems that they wrote on the theme of women’s rights.
We have been delighted to hear that their poems have been included in a book that has been sent in solidarity to Azza Soliman, a lawyer and women’s rights defender who is facing imprisonment in Egypt. Amnesty have recently received feedback that the solidarity Azza is receiving has made her feel she is not alone in this fight, and that the recognition of her efforts has given her the power to continue in the darkest times.
You can find out more about Azza here: https://www.amnesty.org.uk/actions/azza-soliman

The S6 Induction Week will take place between Monday 4th and Friday 8th June 2018. More info can be found here: