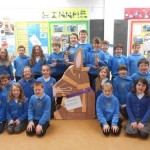 Primary 4-7 pupils perform ‘Troy Story’ at the North Lorn Drama Festival. Adjudicator Nat Little congratulated the pupils on an excellent play which was ‘word-perfect’ with great team work, a ‘real credit to Community Drama’. Particular highlights included the choreography, sound effects, costumes and the ‘funeral scene’. The children had worked hard on the play focussing on voice projection and use of expression in movement. A super achievement winning some well-deserved silverware too! 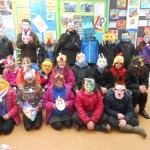 Pre school and primary pupils at Strath of Appin Primary show-off their crafty masks. As part of their whole school homework challenge the pupils had to design and make an Easter or spring-themed mask. A wonderful assortment of masks were made and brought in to school where the pupils enjoyed wearing them to their Easter Service at Appin Church. 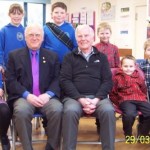 Ellis Carmichael and Ken Oxland from the Oban Burns Club, joined staff, pupils and children from the Pre 5 Unit at Strath of Appin Primary School to celebrate Scotland’s national poet, Robert Burns. After a traditional lunch of haggis, neeps and tatties, the guests enjoyed an afternoon of entertainment provided by the children. The children recited poems and sang songs in Scots, including the Shooglie Wooglie!

END_OF_DOCUMENT_TOKEN_TO_BE_REPLACED 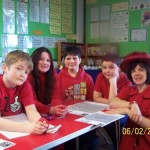 The school also organised and ran a Beetle Drive, which saw a great turnout of children, family and friends. END_OF_DOCUMENT_TOKEN_TO_BE_REPLACED 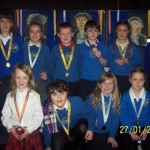 Children from Primary 3, Primary 4 and Primary 5 attended a Burns’ Event, for local primary schools, which was held at the Corran Halls, Oban on the 27th of January. It was all smiles as the children proudly wore the medals that they had won in the various Recitation, Art and Writing in Scots competitions. 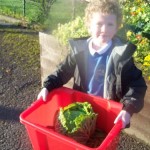 The One Planet Picnic initiative is part of the Keep Scotland Beautiful Eco-Schools programme and Clean and Green Legacy 2014. It is designed to raise awareness of where food comes from, and how it is produced.

Strath of Appin Primary School’s picnic took the form of a Harvest lunch where all the children and staff in the school were invited to enjoy fabulous foods that had been freshly prepared in the school kitchen.

END_OF_DOCUMENT_TOKEN_TO_BE_REPLACED 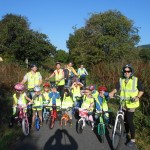 Strath of Appin Pre-5 unit and P1 pupils went on a long cycle ride on 17th Sept. The event was suggested by a pre-schooler who enjoyed cycling and as the school is next to the Route 78 track the group took full advantage of this. The children were joined by staff and parent helpers. The children completed a total of 6km, which was a brilliant effort. All children gained a real sense of achievement, enjoyed keeping physically fit and were very responsible whilst cycling as they had to be aware of other users of the track. We were very fortunate with the weather too! END_OF_DOCUMENT_TOKEN_TO_BE_REPLACED

The North Lorn Primary Schools – Lismore, Strath of Appin, Ardchattan, Barcaldine along with Achaleven and Kilchrenan from further afield, held their own Commonwealth Games on Lismore on Thursday 5th June. Calmac very kindly ran two special ferries to accommodate the 70 visiting children together with staff and parents. The Games began with an Opening Ceremony where each school representing a different Commonwealth country paraded with a flag and a banner before performing a dance or song from their chosen nation.

END_OF_DOCUMENT_TOKEN_TO_BE_REPLACED 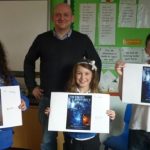 Kevin McLeod, author of The Viking’s Apprentice, paid a visit to Strath of Appin Primary School last week. The children have been reading his novel in class and were delighted when he agreed to visit the school to talk about his work. The children enjoyed a question and answer session with Kevin who then read some more of his story to the children. Three lucky pupils received special art work from Kevin’s second book and he kindly donated two copies of his book to the school library. The children are now eager to read the sequeal to The Viking’s Apprentice and find out how the plot develops in this fast-moving adventure story. END_OF_DOCUMENT_TOKEN_TO_BE_REPLACED 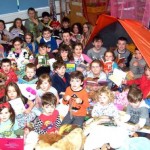 Pupils and staff at Strath of Appin dressed in their pyjamas and brought in bedtime stories and cuddly toys to celebrate World Book Day. The classroom had a specially created ‘reading den’ and pupils brought in sleeping bags, cushions, pillows and beanbags. The day was filled with book-themed activities and quiet reading time. The whole school homework challenge was a big hit, with children asked to send in photographs of themselves reading in interesting or unusual places which included reading up trees, on diggers, in a wheelbarrow, END_OF_DOCUMENT_TOKEN_TO_BE_REPLACED 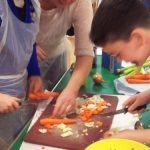 Happy New Year
All three clans in the school certainly rose to the challenge of creating their own pots of soup for the Soup Clan Challenge. There was a hive of activity as Clan Linnhe prepared Winter minestrone soup, Clan Creran prepared tomato and carrot soup and Clan Laich, creamy carrot and coriander. The children really got a lot out of this challenge and it was pleasing to see them use the practical skills that Alex Needham from the Waterfront Restaurant had demonstrated a few weeks earlier.

END_OF_DOCUMENT_TOKEN_TO_BE_REPLACED 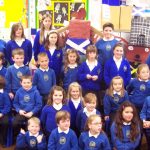 The pupils at Strath of Appin Primary have been putting the finishes touches to their Clan Totem Poles – which now look fantastic! The Clans have demonstrated great examples of team-work and co-operation in our Clan Challenge afternoons. So far the clans have designed a clan banner, clan shield and now a clan totem pole. It’s been messy but fun as the children have pulled together their ideas to create a totem pole representing their clan, incorporating the interests of the pupils and the area/environment they live in. 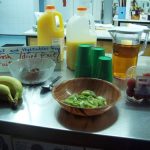 As part of their Health and Wellbeing topic, all the children in the school have been learning about healthy eating and the importance of not skipping breakfast. The children came up with a variety of healthy options that they wanted to try at the Breakfast Club and over the five days the children were given the opportunity to taste these. Options included fruit juices, fresh and dried fruit, whole grain cereals, porridge, wholemeal and seeded breads, yoghurt and semi-skimmed milk.

END_OF_DOCUMENT_TOKEN_TO_BE_REPLACED 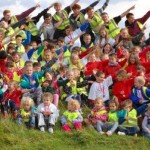 Lismore Primary School hosted a Charity Fun Run for the North Lorn Co-op Schools on Tuesday afternoon to raise money for Argyll Beats Cardiovascular Disease. The event was a follow up to last week’s Health and Well-being Day held at Strath of Appin Primary School.
The Lismore children have spent some time planning the event in previous weeks. END_OF_DOCUMENT_TOKEN_TO_BE_REPLACED 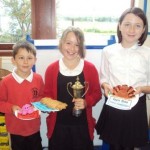 Katie and her twin siblings, Abi and Ben entered the ‘ Salt Dough Craft Animal’ category. After the salt dough was made the children set to work!! After making, baking and painting the animals were finally ready.
END_OF_DOCUMENT_TOKEN_TO_BE_REPLACED 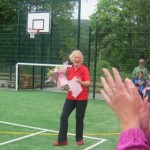 Mrs Morrison was delighted (and embarrassed) yesterday when she was presented with a lovely bouquet of flowers and cards for her retirement. The North Lorn Schools Co-op Head Teachers (Strath of Appin, Lismore and Ardchattan) yesterday thanked her for all your support and contribution to the smooth running of all our combined activities that we have all taken part in.
Mrs Morrison, Head Teacher is retiring from Barcaldine Primary School this summer.
We wish her well in all her new endeavours!! 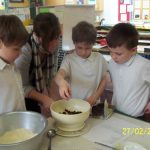 Primary one, two and three with the help of Cameron from P7 helped organise and run a successful Fairtrade coffee afternoon in the school. The children baked in the morning using recipes from their Fairtrade recipe book. In the afternoon they helped set the tables and made sure that those who attended were well looked after.

END_OF_DOCUMENT_TOKEN_TO_BE_REPLACED 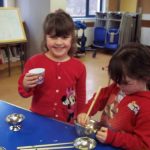 Children from the Pre School in Strath of Appin Primary School, along with the children in Primary One and Two have been learning about the traditions and customs surrounding Chinese New Year. Over the past few weeks they have had great fun making lanterns, facemasks, red money envelopes and puppets. END_OF_DOCUMENT_TOKEN_TO_BE_REPLACED 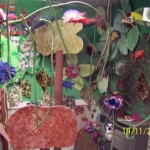 Family and friends joined the children of Strath of Appin Primary School on Wednesday 14 November to celebrate the end of their Topic work on Tropical Rainforests.  The children enjoyed singing their rainforest ‘raps’, showing off their artwork and sharing their learning.  Fairtrade refreshments were served up in the Rainforest café.  These included Fairtrade teas and coffees and Fairtrade chocolate Krispies. The children created their own Rainforest smoothies and guests were invited to vote for their favourite.

There was even an opportunity to get your photo taken in the ‘Rainforest!’ END_OF_DOCUMENT_TOKEN_TO_BE_REPLACED

The Pre-school children, pupils and staff at Strath of Appin Primary School celebrated World Porridge Day a week early on the 2nd of October.  The children sang the Gaelic song ‘Brochan Lom’  (Thin Porridge), before sitting down to a bowl of porridge that had been prepared by Debbie, the school cook.   Not everyone enjoyed their porridge, but some children had 2 helpings!

Donations received at the Porridge morning were sent to support the work of Mary’s Meals in feeding hungry children in some of the poorest countries in the world.  The children were delighted to hear that their efforts had raised enough money to feed three children for an entire school year. END_OF_DOCUMENT_TOKEN_TO_BE_REPLACED