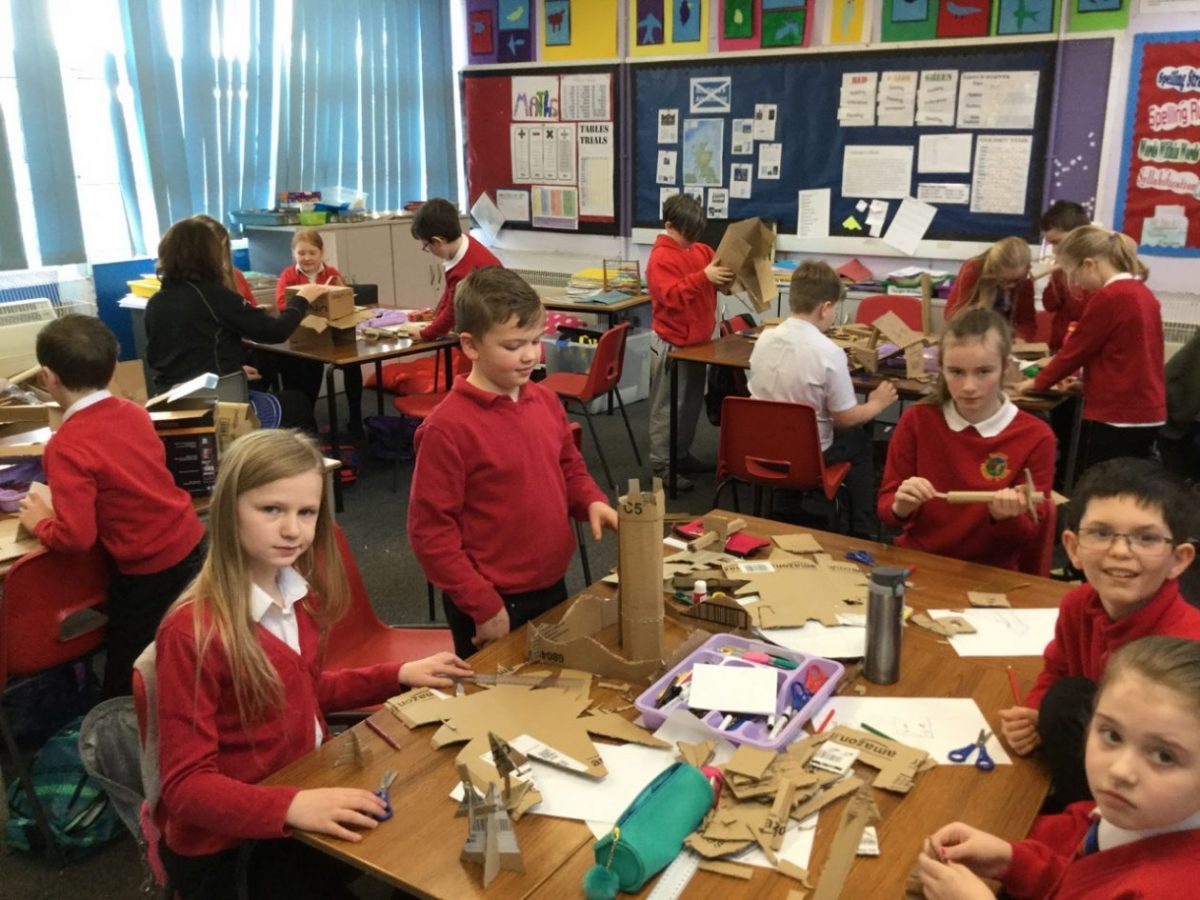 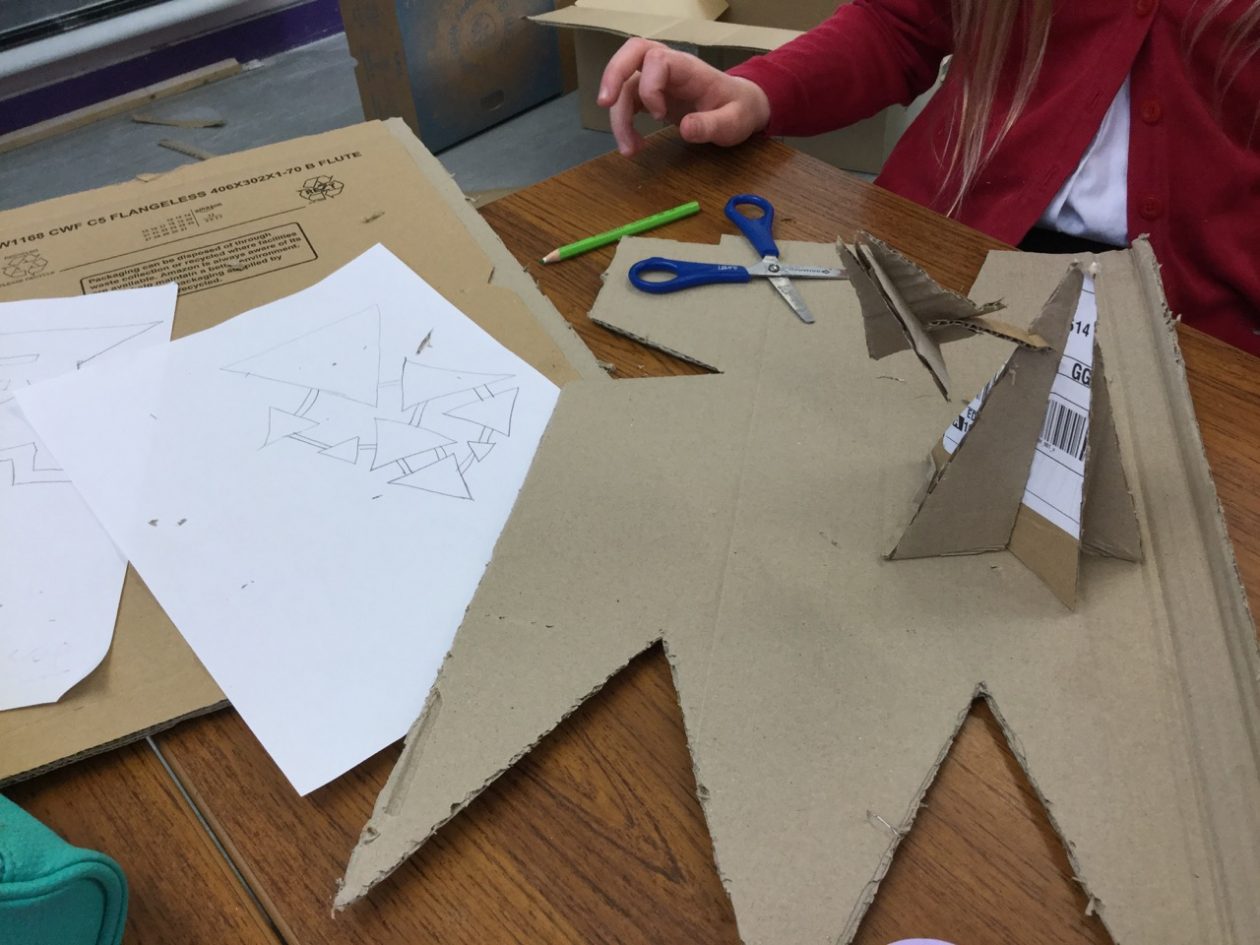 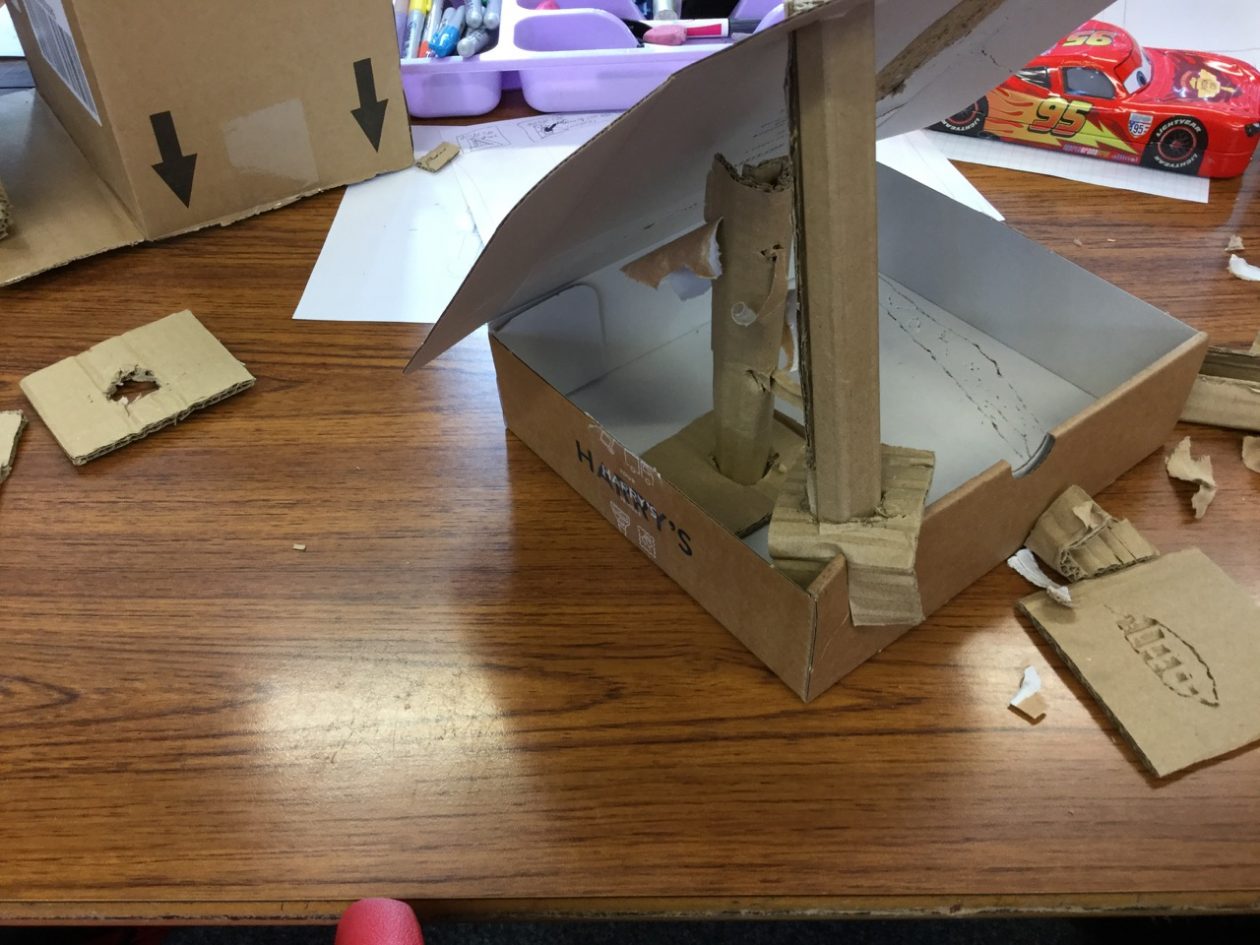 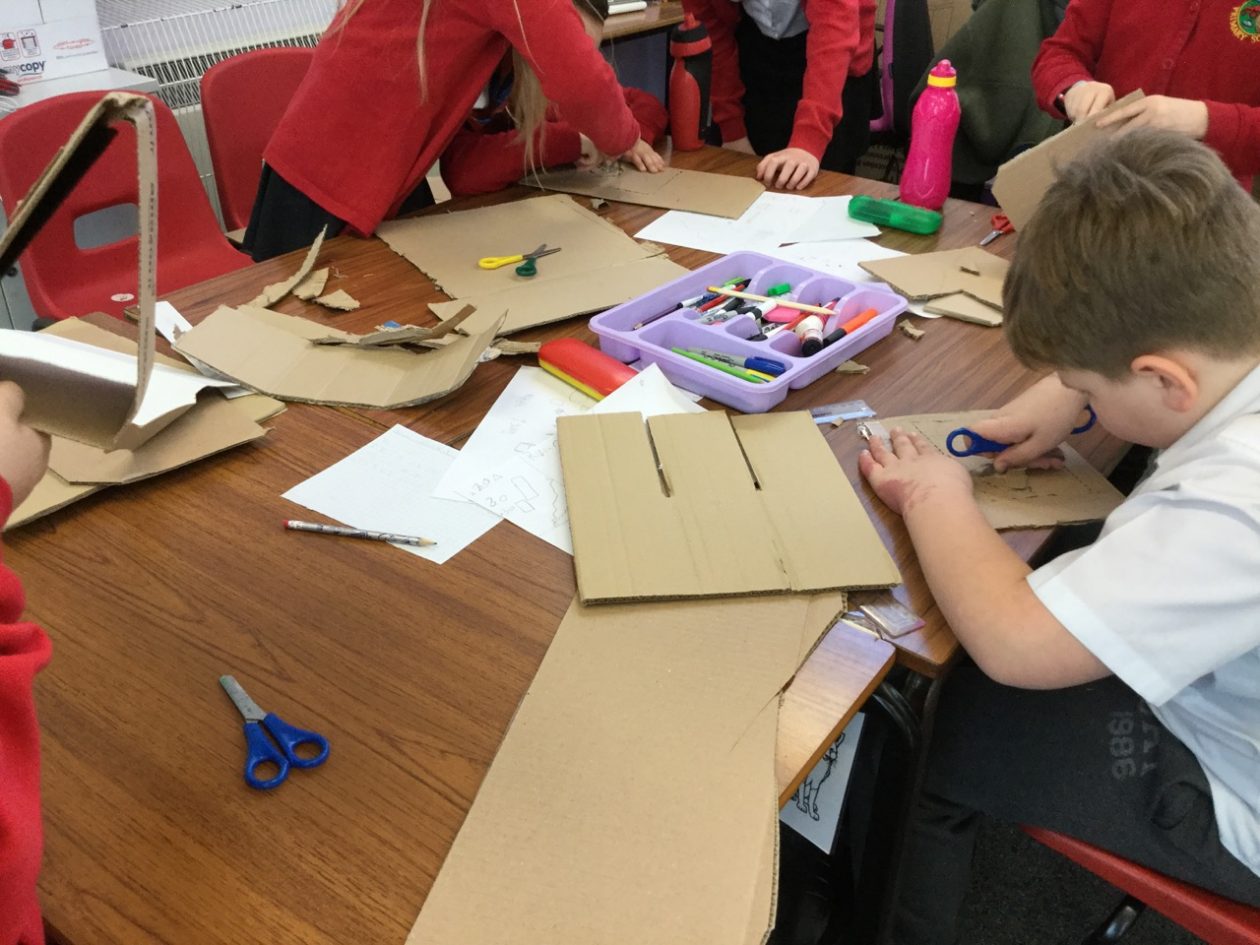 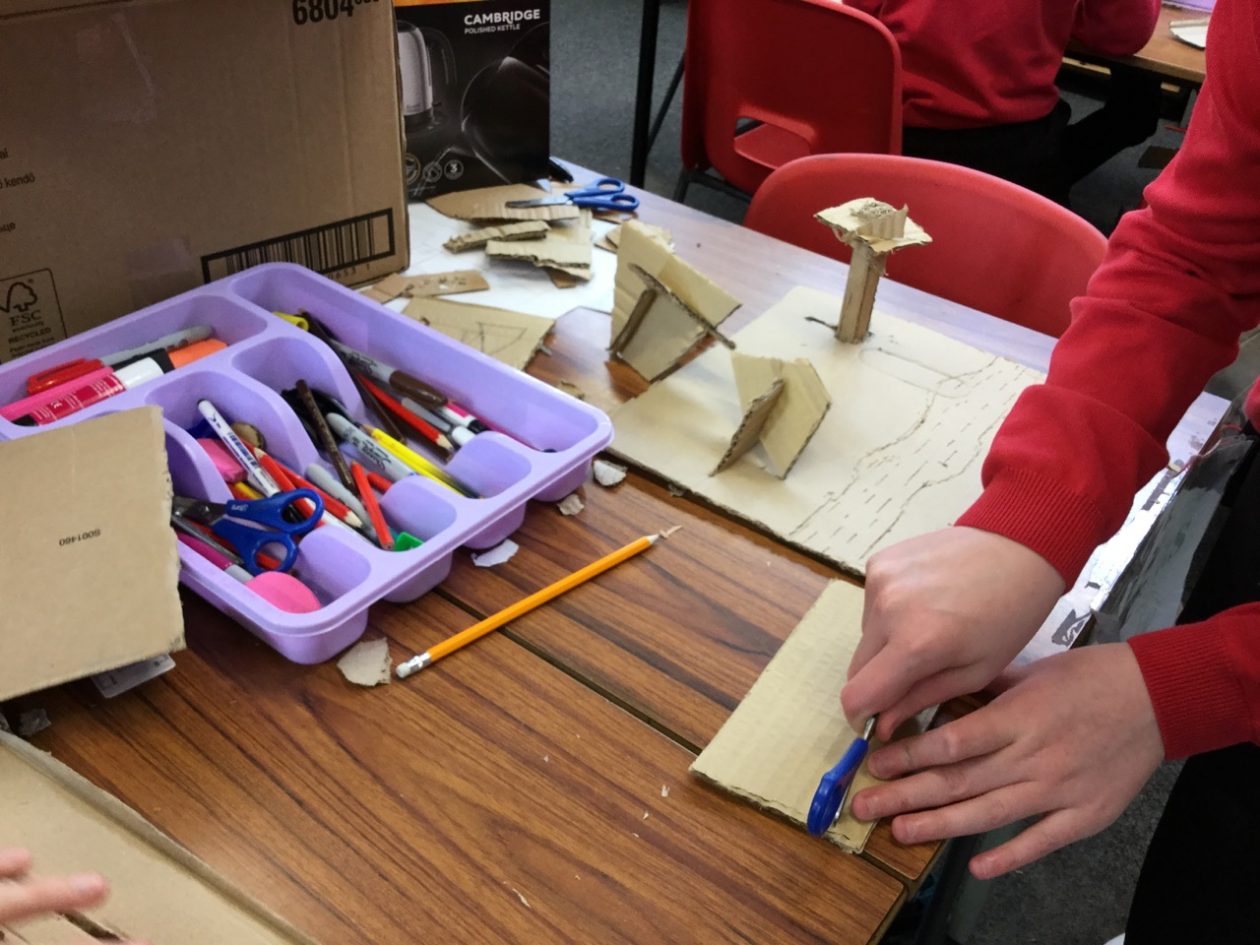 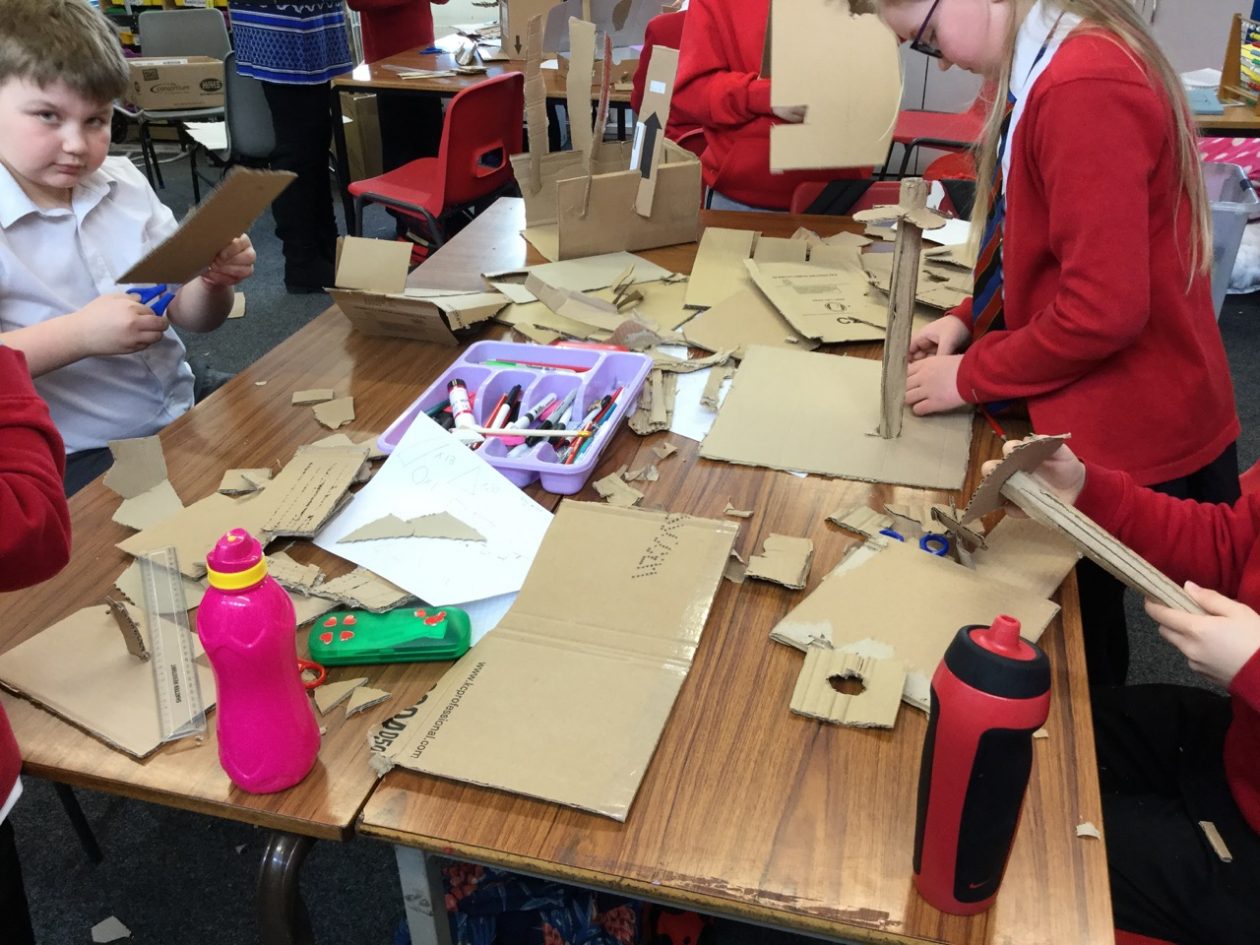 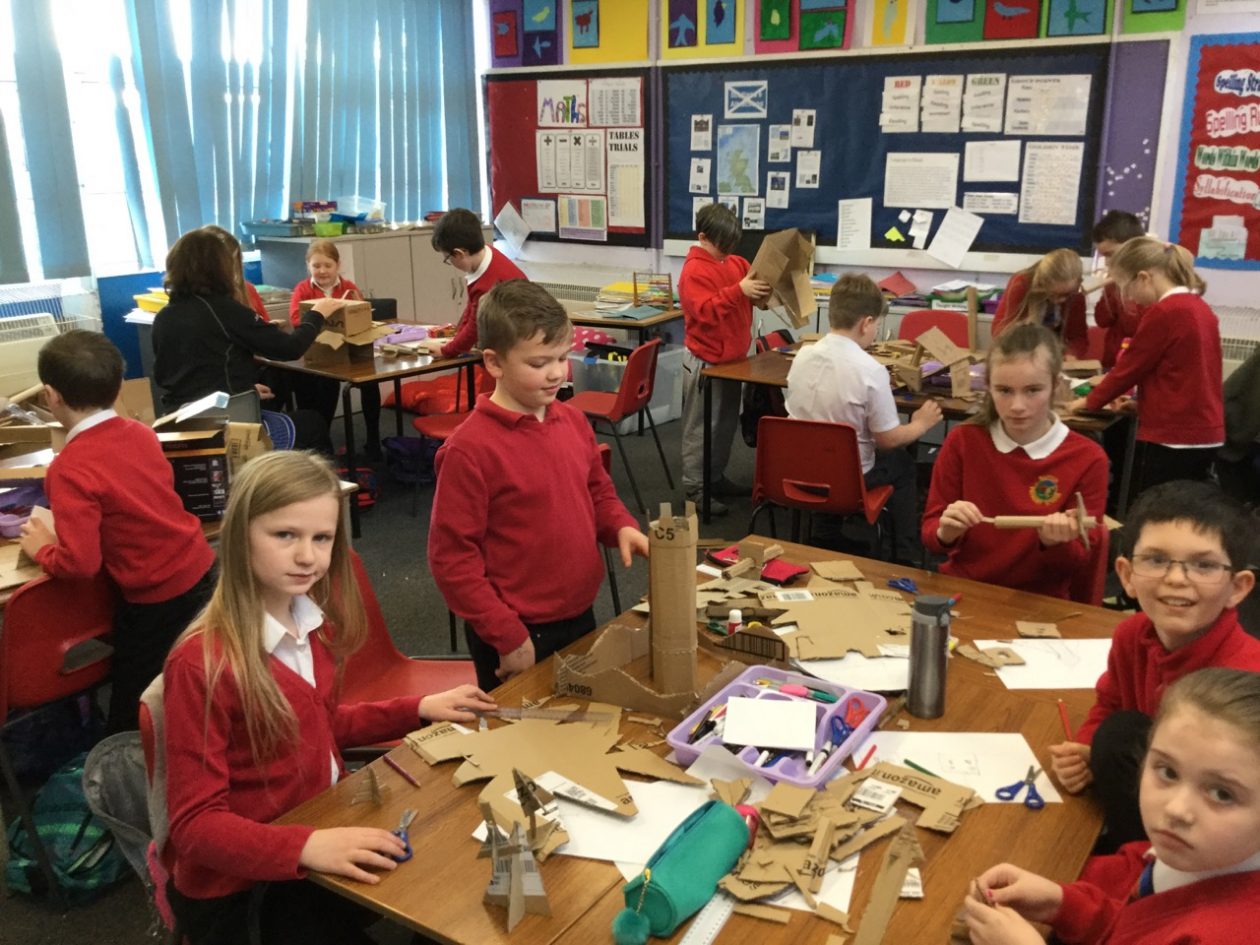 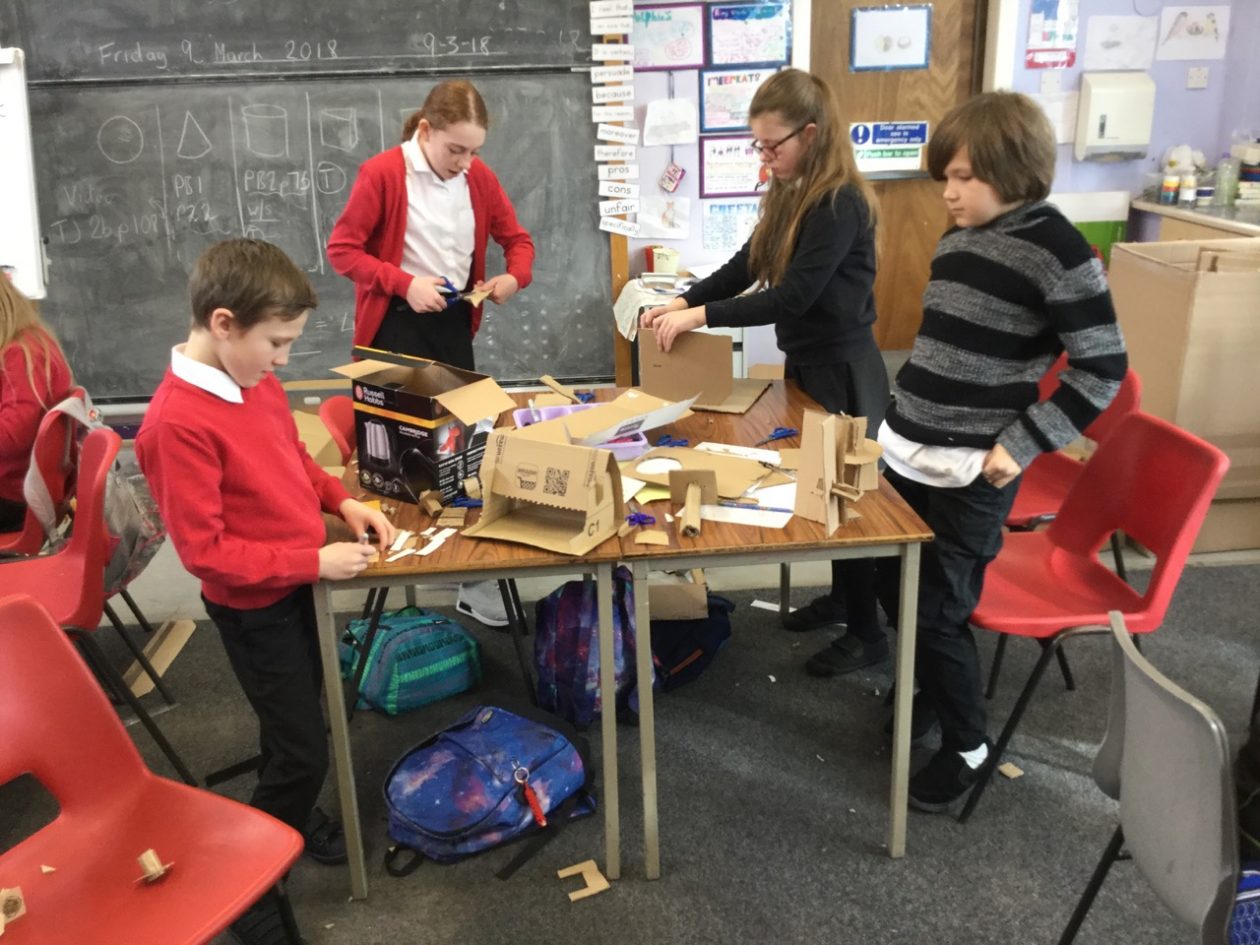 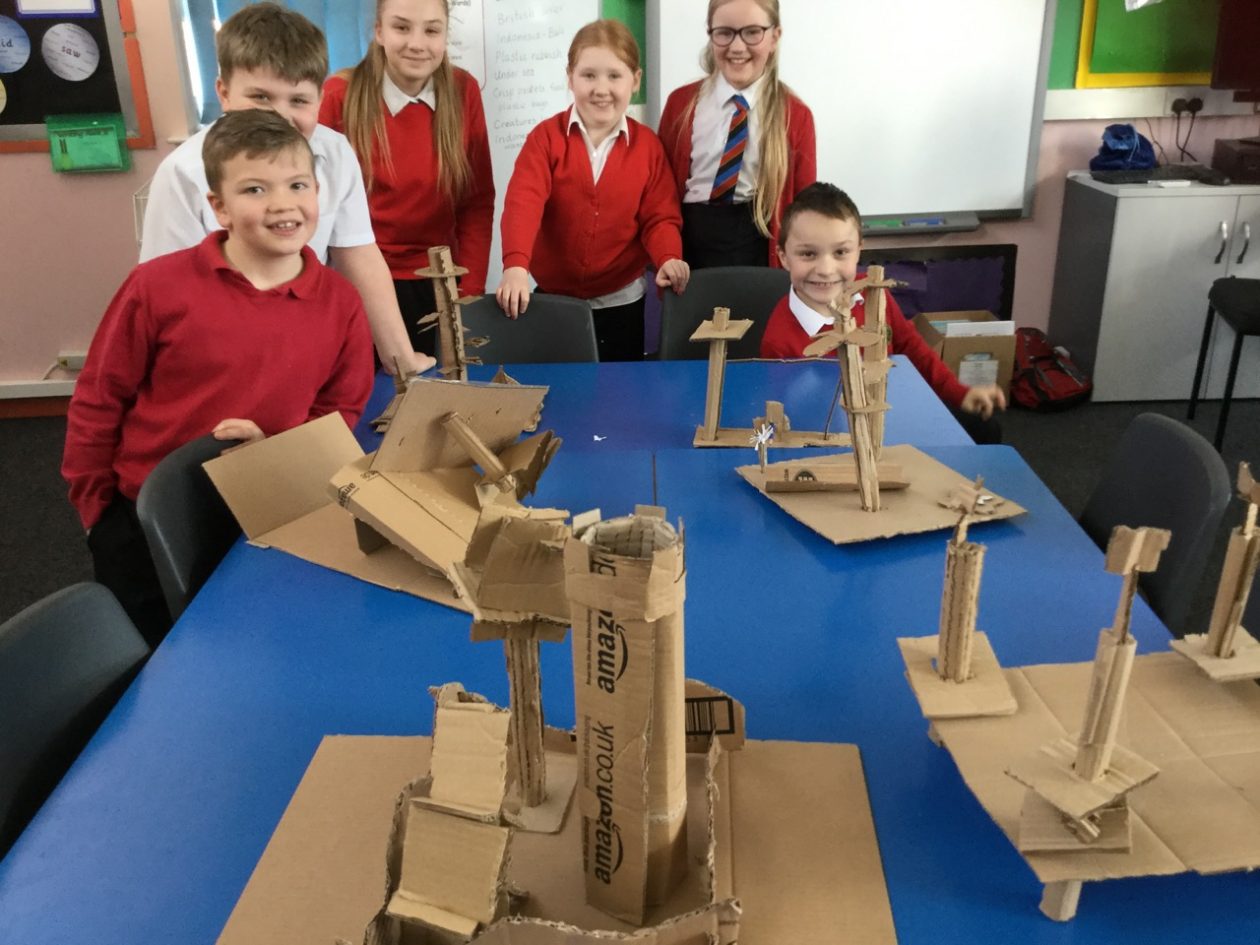 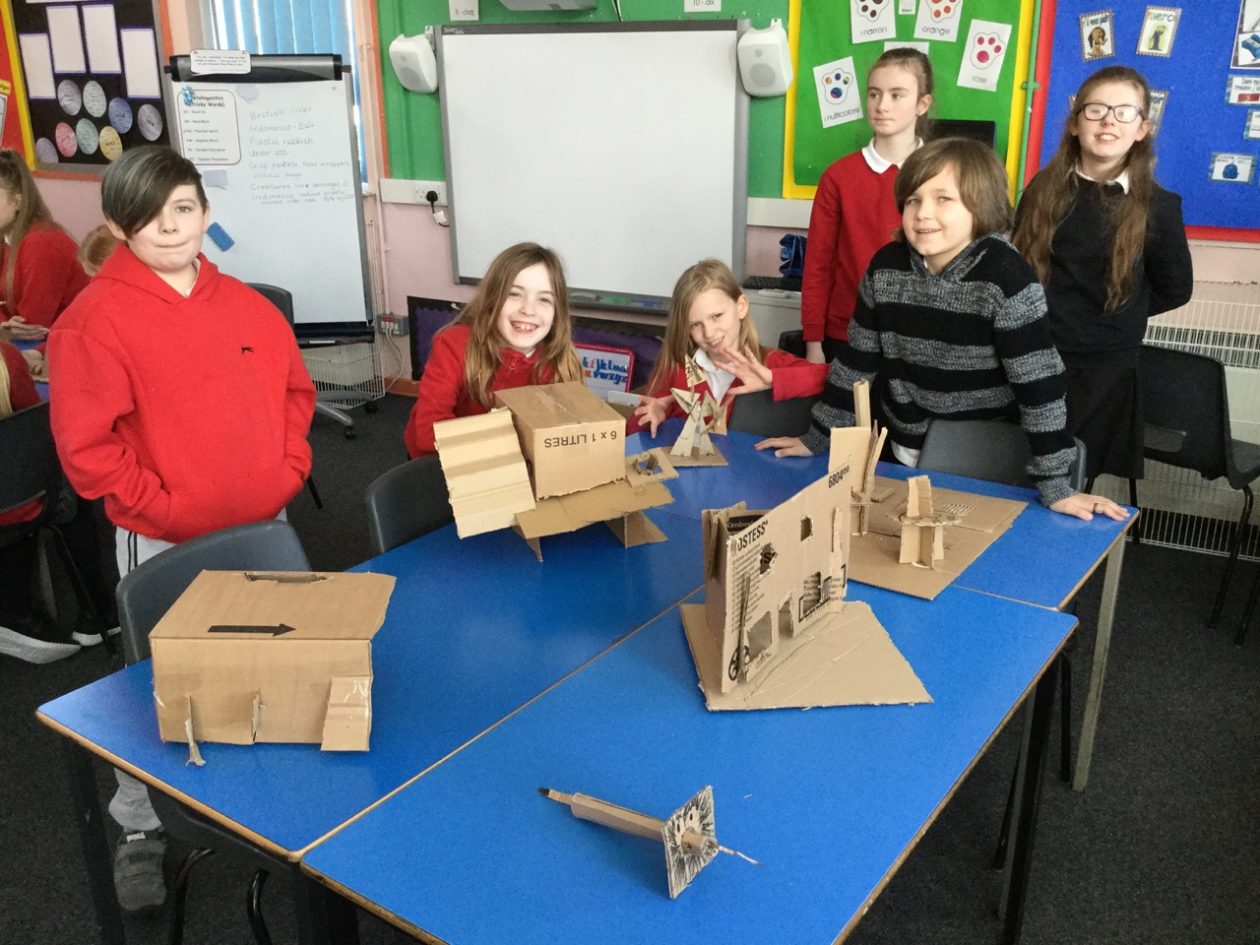 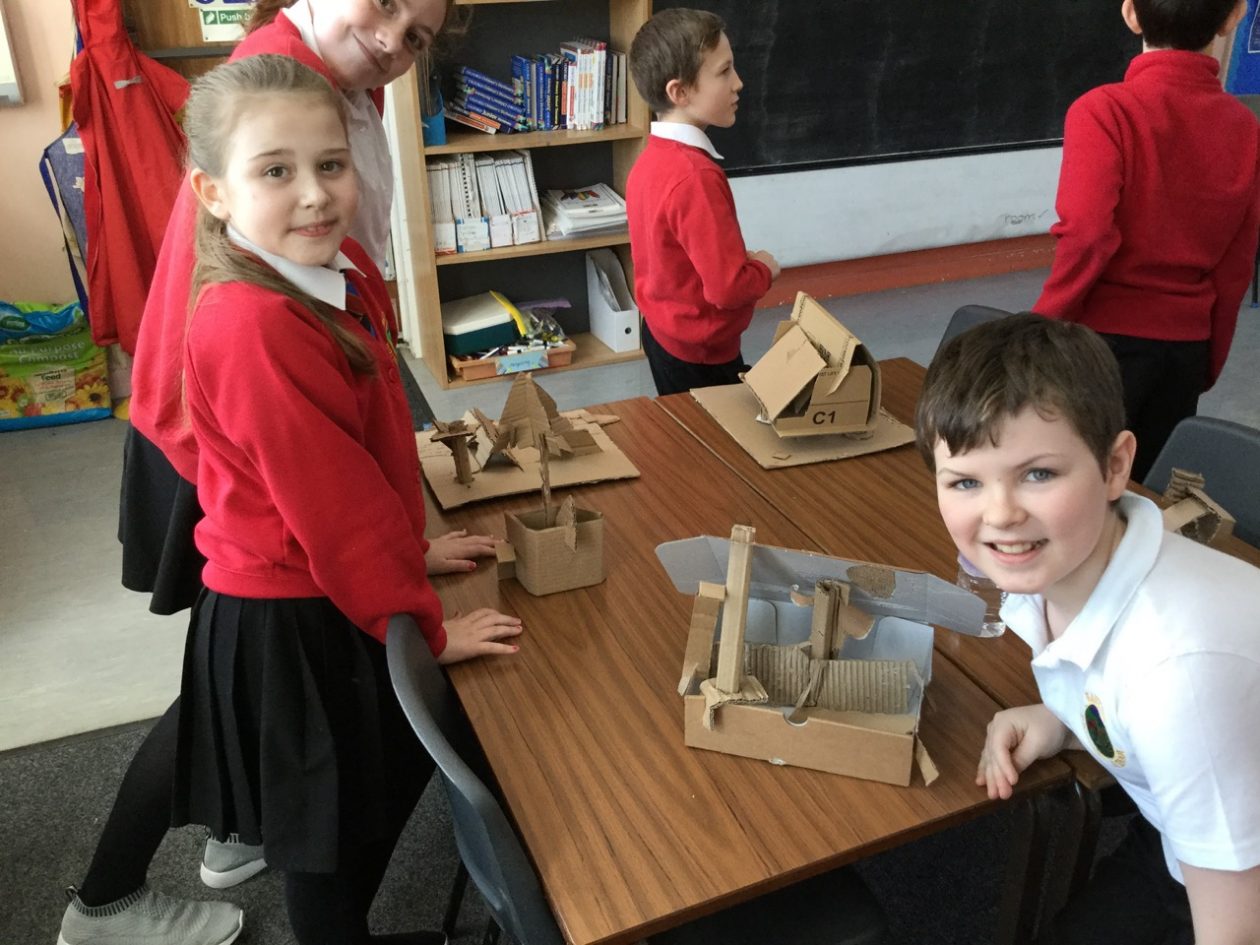 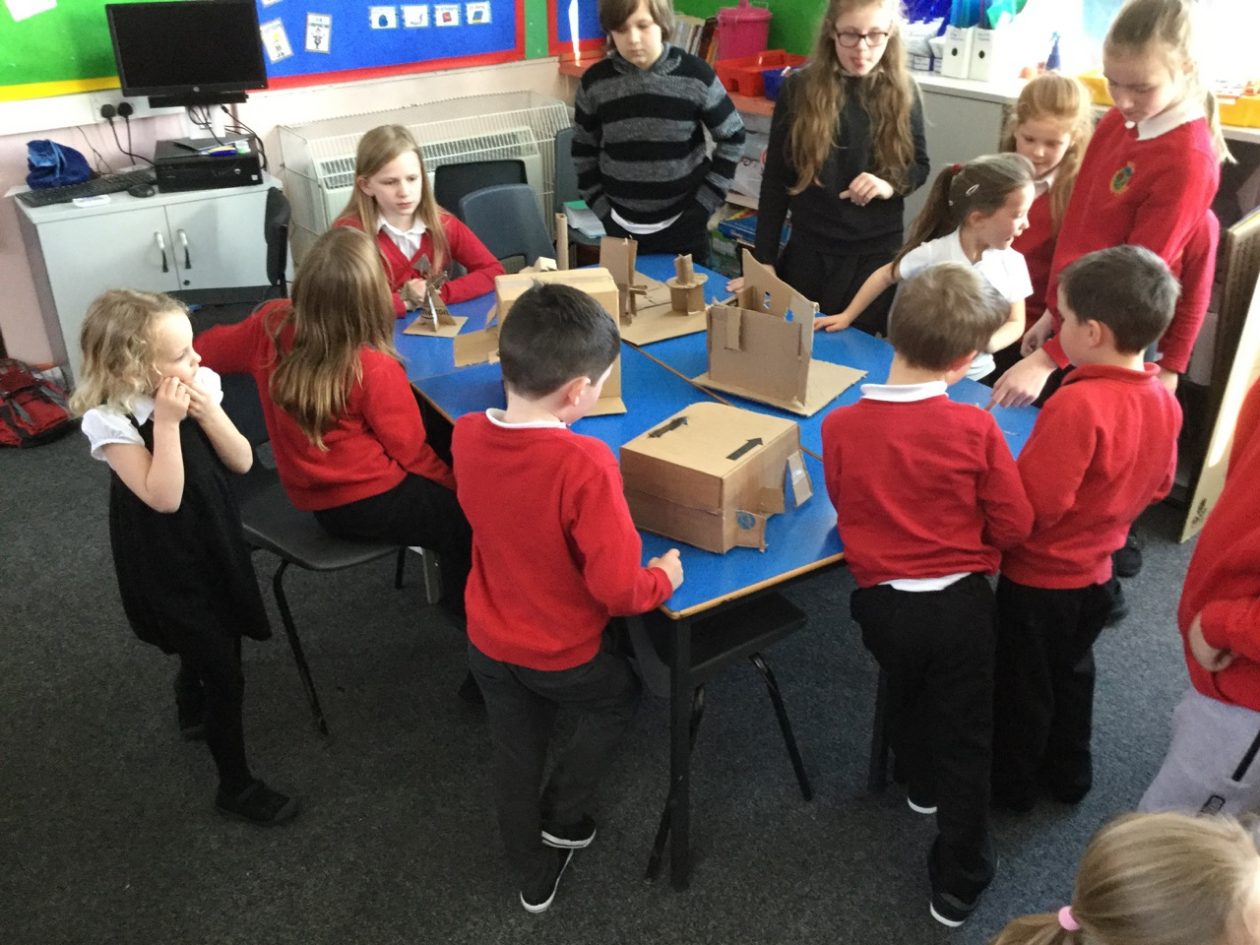 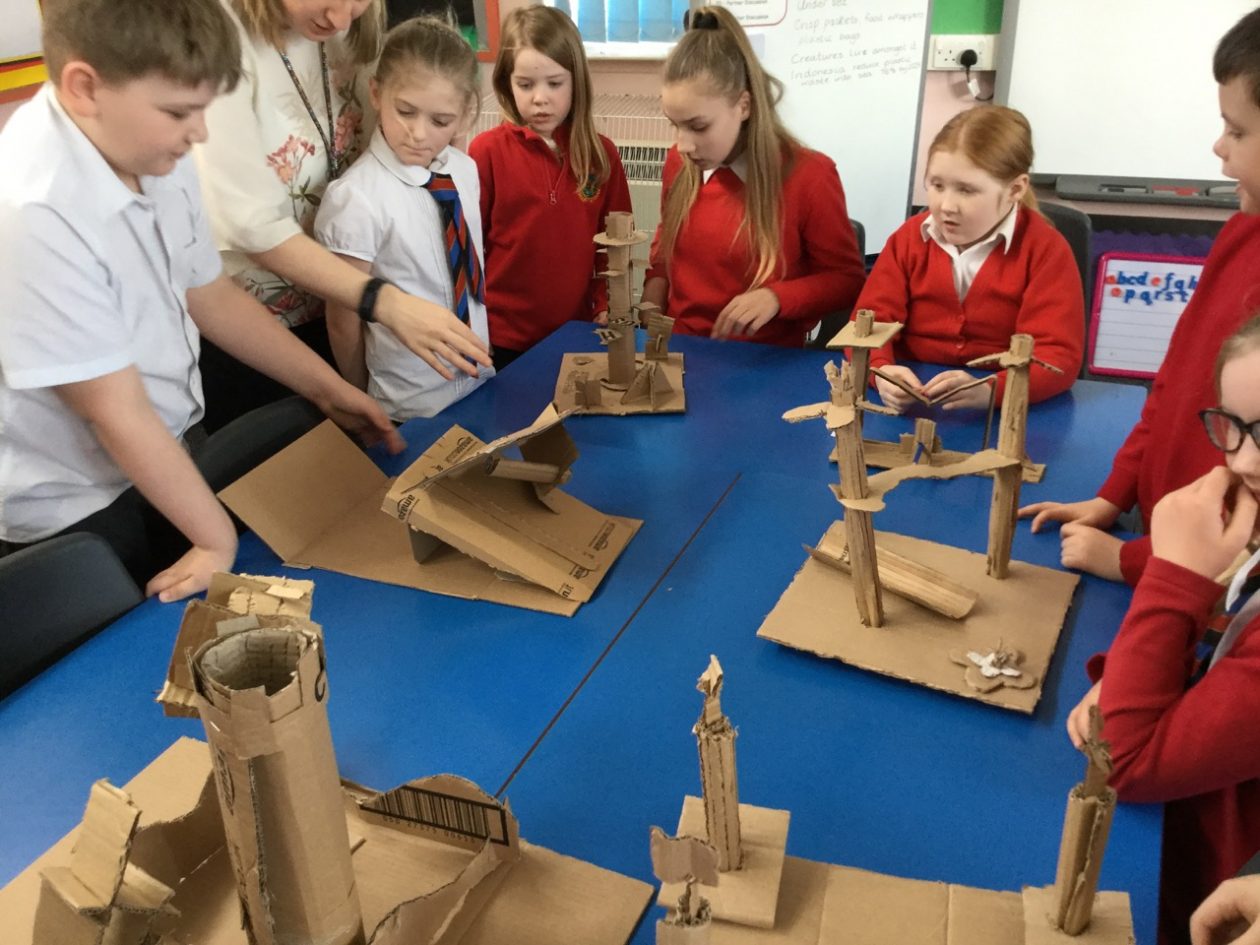 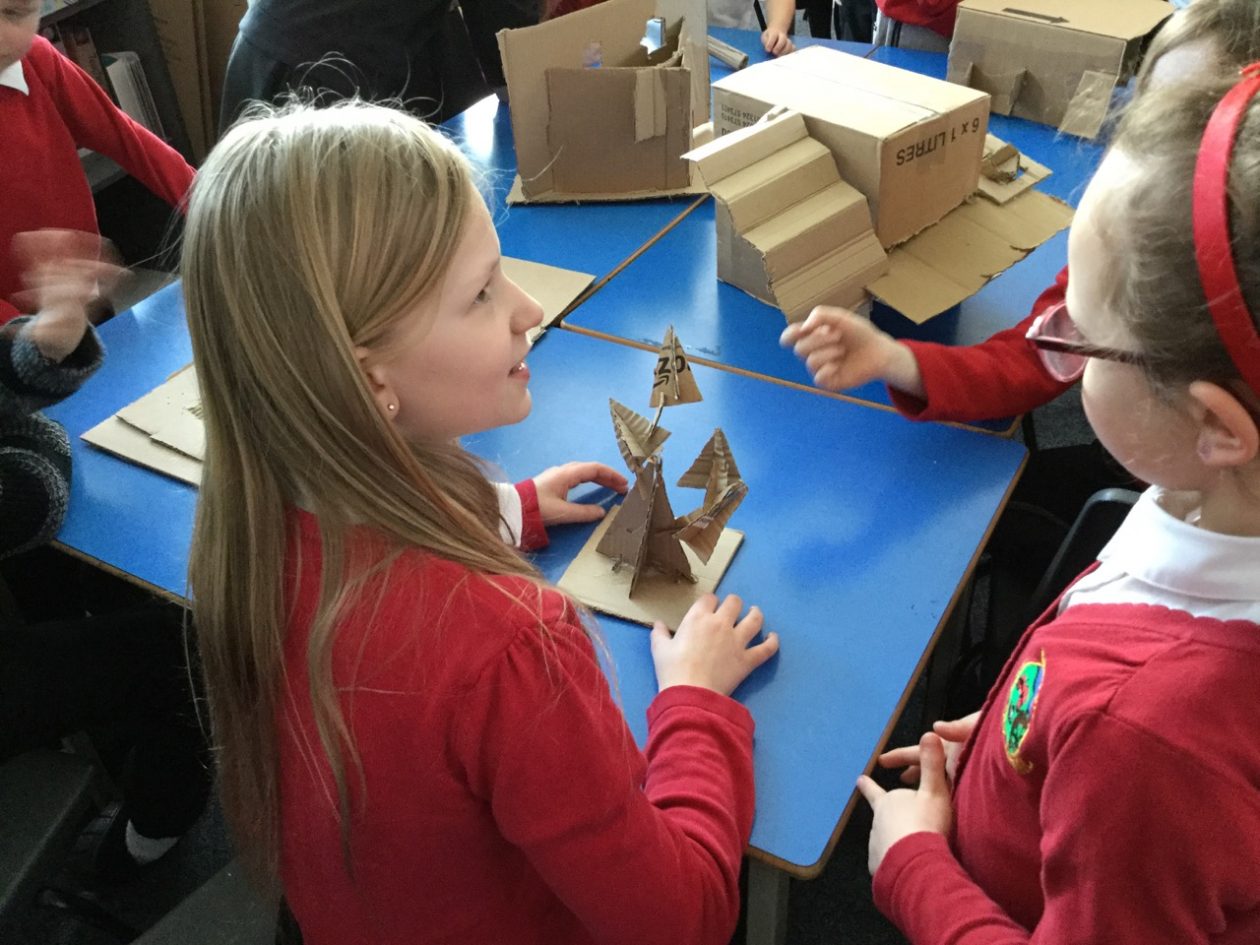 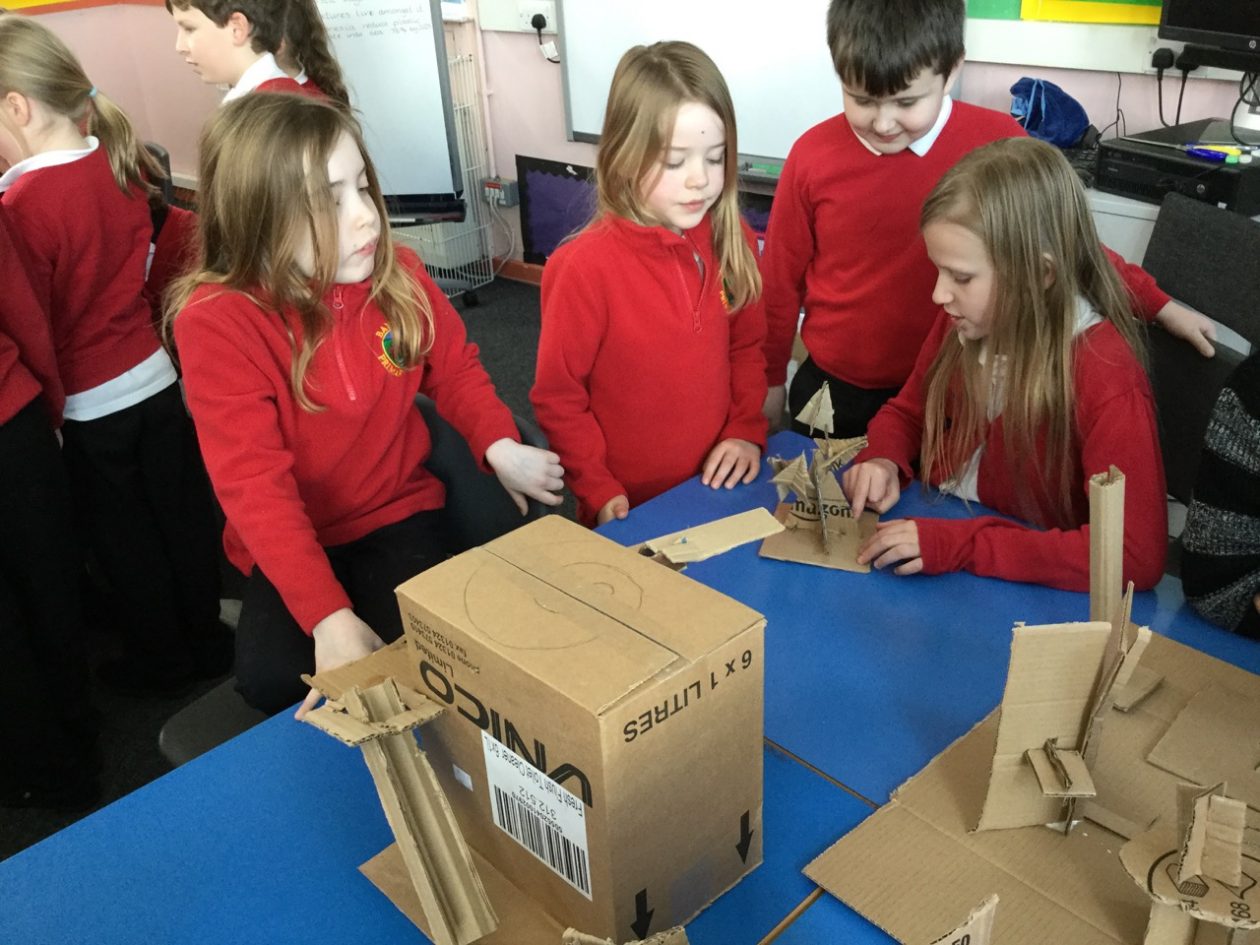 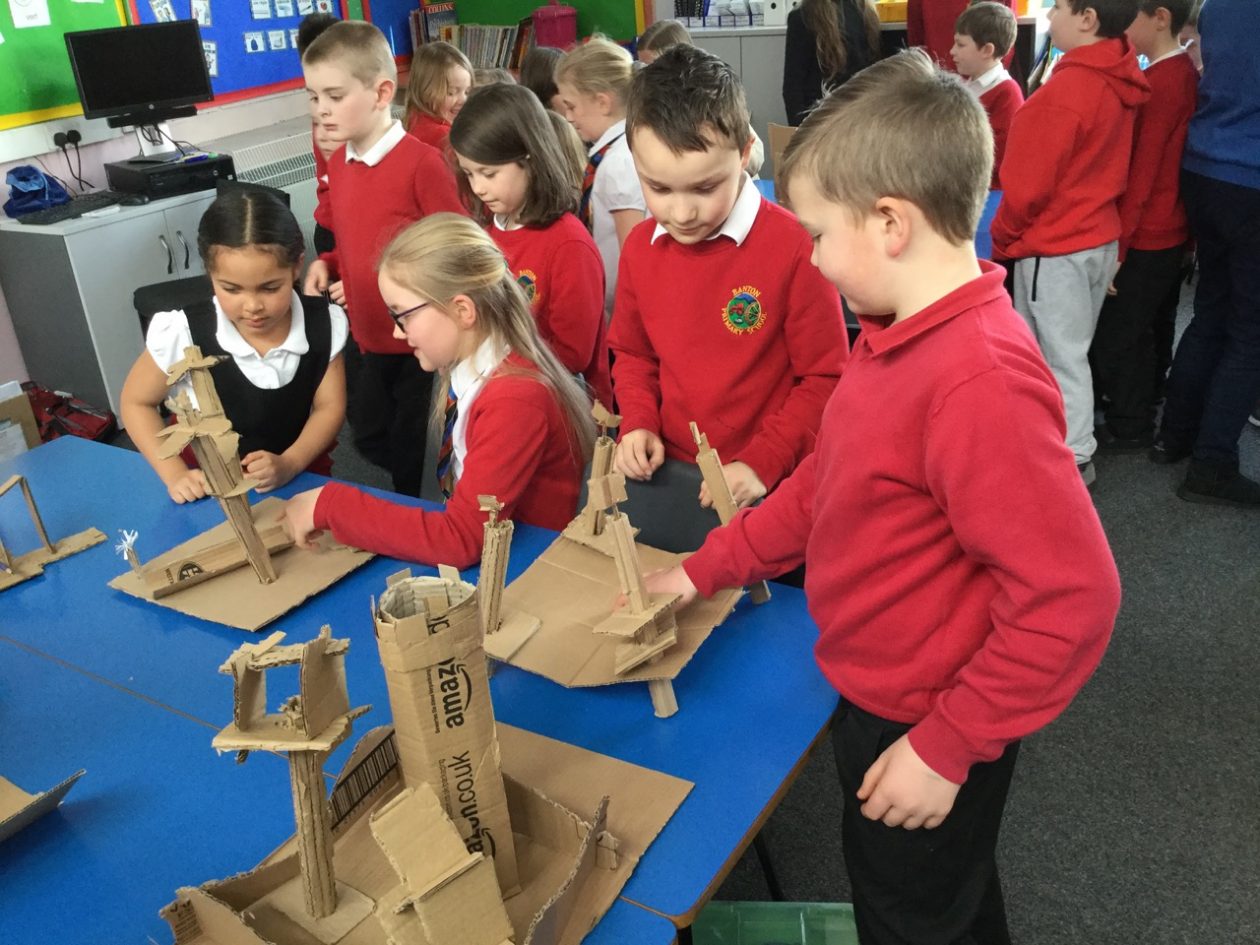 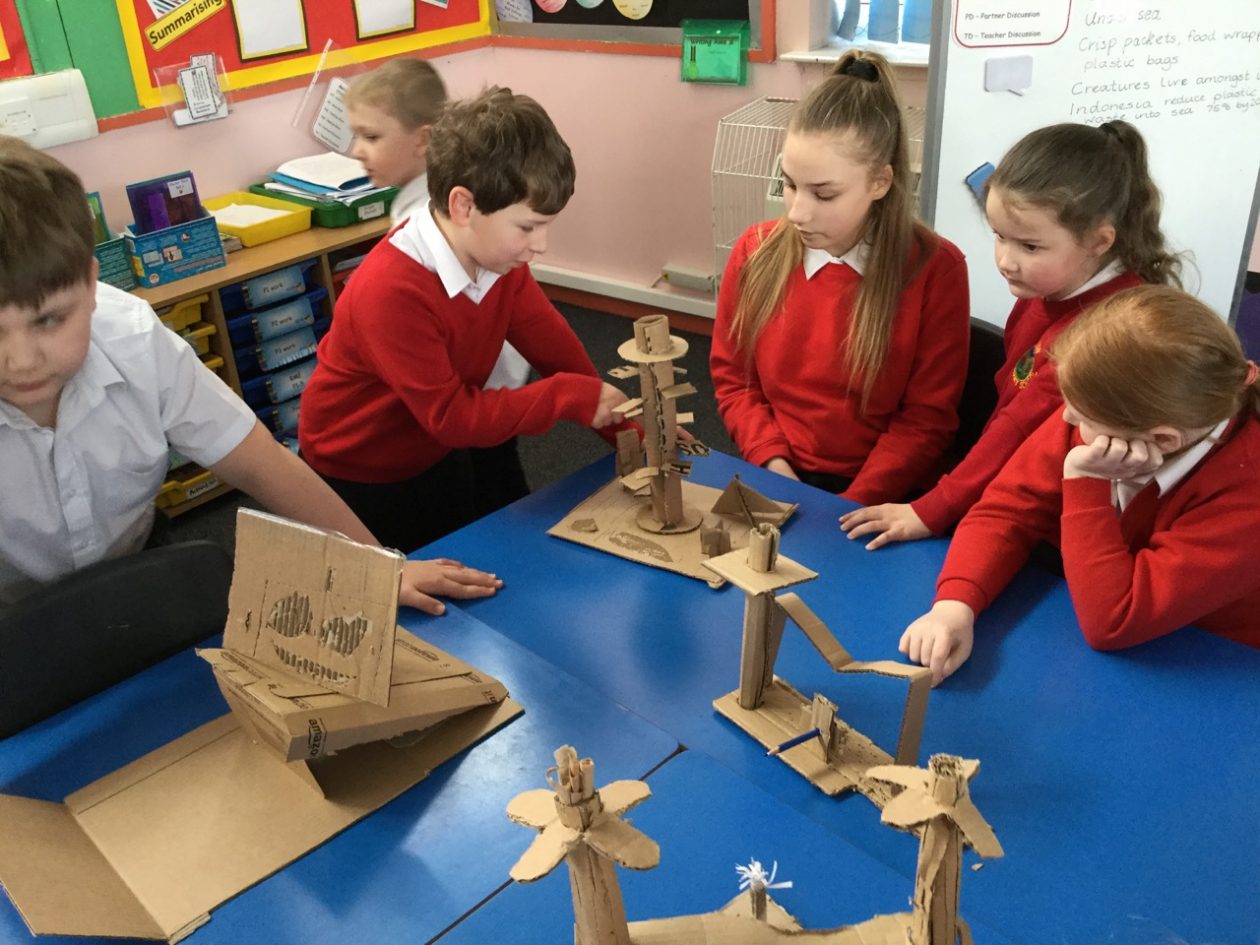 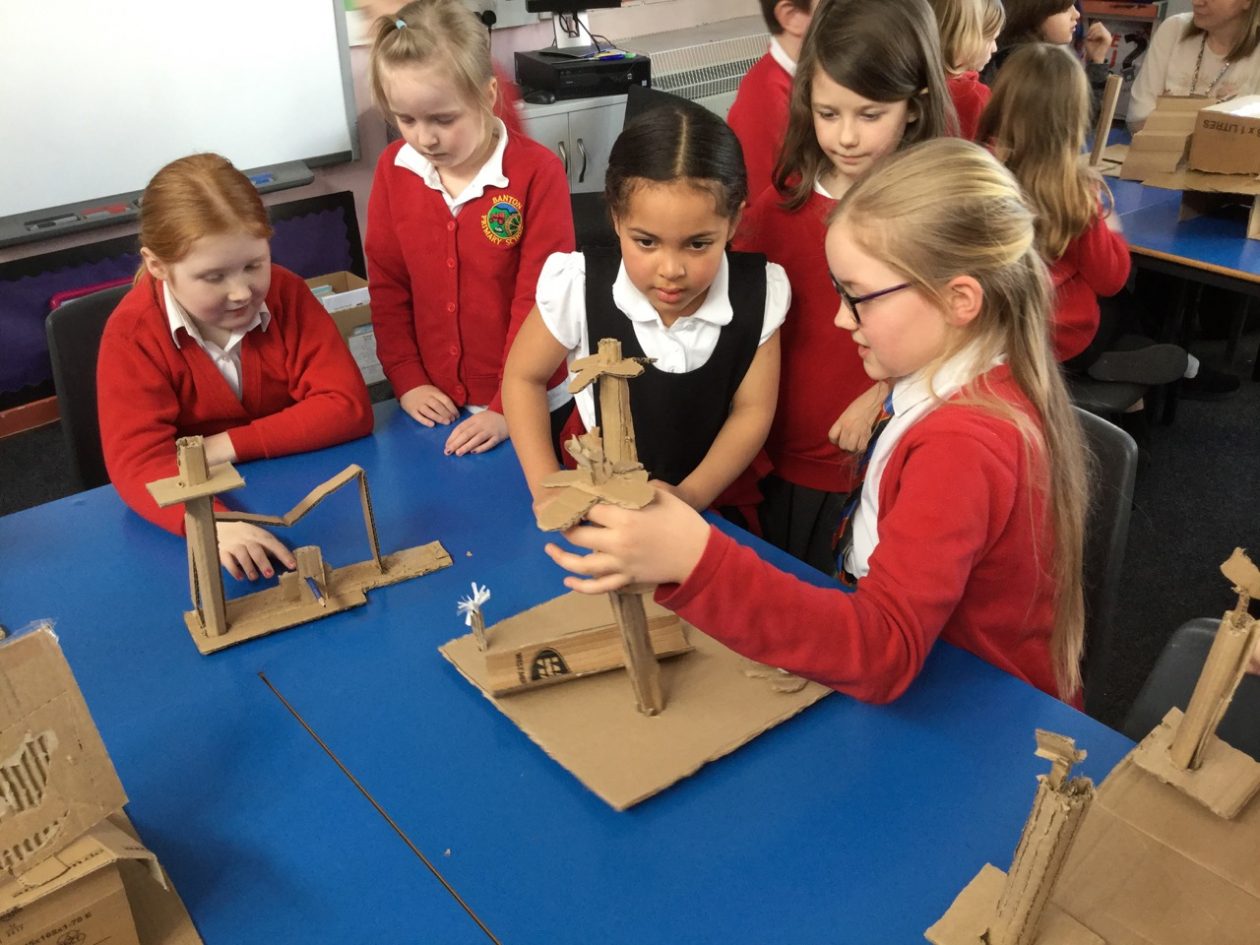 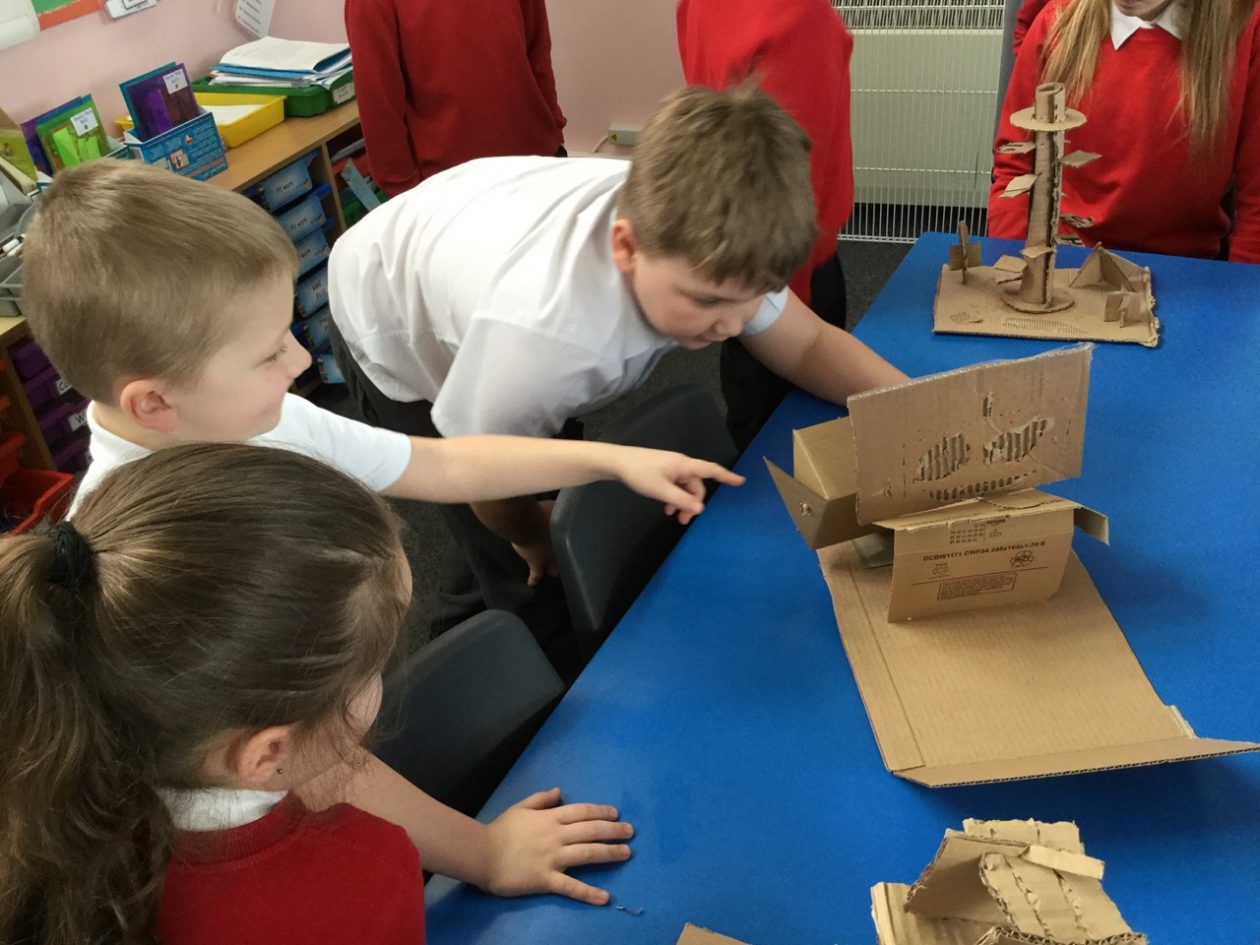 Click on the thumbnails above to see bigger versions of the photos.

The Biggies did a wonderful job creating fantastic architecture with cardboard, no sellotape, no glue. Here are some of the things they wrote about the lesson in their e-Portfolios.

This week our class made a sculpture each. The sculpture we made was to do with our art we planned it and we were inspired by the architect called Frank Gehry. We made a sculpture out of cardboard. We had some rules and the rules were we had to make our sculpture maximum 30cm in high and width, also we weren’t aloud to use sellotape and were only allowed to use as minimum amount of glue as possible. Emma

I was mostly going to make towers with different shapes slotted in to it and making shapes and attaching them together. I was going to make a cube by slotting lots of squares together and I was going to scrape the top layer of the cardboard of so that all of the shapes sticking out wasn’t all the same.

I rolled up a piece of cardboard I made it easier to roll up by using scissors and scraping down it to make it weaker. Then I used a small square and cut a circle out of it and put it on around the tube so that it doesn’t unfold. I cut squares and slotted them into the tube I slotted them into the holes that I made with scissors so I didn’t use any glue for that part. I then made triangles and put them together.
Zara

I have learned how to make different shapes with things and we can make mistakes but I think that’s good. Jack

The first thing I made a flower because I was thinking about flowers when I started. So I made two flower shapes and then I put the smaller flower shape on top.then I made two trees with a path between them. Then I made a log by scoring down the lines with scissors ✂️ then i made a curve in it and then I glued it to the platform of my design.
I had a problem when the path between my trees broke.my solution to the problem was to leave it alone so that it would not get any worse. Islay

I had two problems when trying to make my house my first one was that I had to try and join and make the walls stand up. I joined my wall by getting a little piece of cardboard and cut to long lines and then i slotted it in to the two walls. My second problem was how would I put on my last wall on I made to lines in the other two walls and slotted it in.

What I have learned making this Art Work
I have learned not everything goes to plan and you don’t need glue or sellotape to make everything and I learned how to join cardboard together. Emily

I got a box and I made the sky by cutting it up with a compass then I ripped off some of the top off to make the moon then I used the ripped bits to make tree leaves then I rolled up a bit of cardboard and made a tree. Also I made a bridge and water and a fence. Max

P Making the flags S get Mr. Johnston to cut out the flag shapes.
P everything S Change it to what it is now. Hannah

I did not now how I was going to make the triangles but I figured it out.
How my work makes me feel or think when I look at it
It make me real happy because I thought that it would be a fail. Jess

My idea 💡 was to make a cool 😎 castle
I cut out shapes from card board and slotted them together.
Sometimes it was hard to slot things together. I worked it out. Alana

My problems were making holes for putting the towers in the holes. And my solutions were fiddling and just adding stuff on.
When I look at it it makes me feel impressed and makes me want to do more. And I really like the look at it. Aaron

I made a strong base
then built a tower using card and scissors.
My first model didn’t work so I made a second one.
I was happy because I made it stand up on it’s own Rhea

Looking at my work makes me think about making it and it makes me feel happy.
I learned how to fix mistakes. Jonah

I wanted to have a it to stand up. I wanted it to look like something weird
I started by making a fence and I slotted it together.

One of my problems was when I was slotting bits together it would rip I solved it by taking my time.
How my work makes me feel or think when I look at it
It makes me feel very very very proud of my self because my model looked great. Fulton

I tried to make the same thing as what my plans were but it was to hard so I got a box and attached a thing that was 3 quarters of a tube then there is also a plat-form with stares that go to the roof and the final bit is the bottom there is a big hole for the door.
My problem was how I wanted it at the beginning it couldn’t stand and I could not make a treehouse so I make it completely different.

My art work makes me think about a river with a bridge going into a forest and there’s bushes before the bridge with a watch tower to look over the place and see what’s going on.
I have learned a lot about my art there’s a lot of mistakes in art and you just need the right inspiration to find it and change it because everything you planned might not turn out the way you wanted it to be sometimes it gives you a lot better ideas. Emma