Click on link for the latest netball match report 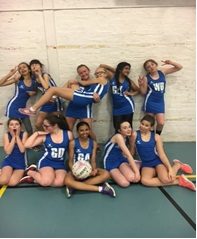 Eastwood seniors were unlucky to lose against St Ninians controversially. But there were a lot of positives to come out of the game and the performance will hopefully give the team a lot of confidence for the rest of the games in the season.

The game started positively with the front three, Kyle Taylor, Keenan Campbell and Harris Mclean, pressing the defence up the park. St Ninians were unable to get out so a free kick was awarded, taken by Calvin McGrory.  We kept the pressure up and Harris had a great chance but just dragged his shot wide.  St Ninians had a good few chances but our defence cleared the ball well and Calum James made a great number of blocks.  From a corner, St Ninians had a great chance but they missed a free header right in front of Scott Johnson, Eastwood goalkeeper. Scott made a great save by tipping it onto the bar after the defence failed to clear their lines.  It was a superb first half end to end and Calvin had another brilliant shot and it pulled out a great stop from the goalkeeper.  But then Kyle had the best chance of the game so far when he took it round a couple of defenders and shot it straight on target at the goalkeeper.

Suddenly, the first goal of the game came for Eastwood from Keenan Campbell after a run from Kyle taking it passed 3 players, passing to Keenan who slotted it in at the near post – a deserved lead for the Eastwood seniors. Nevertheless, it was only a few minutes later that St Ninians were level with poor defending form the Eastwood boys after we failed to clear their lines.  But then – another goal for Eastwood came quick! Just before half time,  it was our goalkeeper that got the assist when he hit it up from a goal kick and Calum Patrick ran onto it with a powerful amount of pace, past the defence and chipped it over the goalkeeper into the far right corner.

The second half started with St Ninians on the front foot and Scott in goal, pulling off a string of great saves to keep us in the lead. But then Eastwood started to play some outstanding football which lead to some great chances, one from Keenan who got a shot cleared off the line then Stefan Downey hit the rebound and the keeper pulled off a great save.  Unfortunately, it all went downhill from Eastwood as St Ninians scored 3 quick goals.  The first one came from an overhead kick into the top corner but I found out after the game that he was offside so that goal should not have stood.  Then about 4 minutes later the defence again failed to clear their lines again so they managed to get through our defence and score to take the lead. St Ninians wrapped the game up with a controversial goal when Cameron Keir was blatantly fouled but the referee didn’t give it and their striker ran through on goal, dinking it over Scott to wrap it up.

Eastwood S2’s kicked off their season with an unfortunate loss against a very good Williamwood side. But despite the result there were really good stand out performances from Kerr Scott in midfield, Fraser Lipp upfront and Steven Collingham in goal.

The game started with Williamwood on the front foot, from a corner Williamwood put the ball in and after the Eastwood defence switched off a great clearance off the line from one of the Eastwood boys to keep the game level. It was all Williamwood in the first half and they continued to pile the pressure on a really resolute and organised Eastwood defence with a great shot from far out and a really good save from Steven again. Then from the resulting corner again Eastwood turn off and a fabulous save from Steven again to keep the game at 1-0. But then the goal came and it was coming after the winger ran down the line to cut the ball back and an easy tap in from the Williamwood striker. Then shortly after they made it 2 when the Eastwood full back fell asleep and they managed to cut inside and pass it across then he finished it in from a tight angle. Then Eastwood put Williamwood under some pressure when Kerr Scott was plying one twos with the full backs then into Fraser Lipp but it was a tame shot straight at the keeper. But shortly after Williamwood unfortunately made it 3 when a long shot from the midfielder caught Steven off guard and he spilled it, it was debatable whether it was over the line but I think the referee made the correct decision. So Eastwood went into the break 3-0 down.

Mr Read said in his team talk that if we can get a goal early in the second half then anything can happen in this game.

Eastwood were the better of the two teams in the second half with some really good football being played but Williamwood had the best chance of the first half with Steven again making some really good saves from the original shot and from the rebound from about 6 yards out. Eastwood then scored from an great turn and shot from Fraser Lipp but it was too little too late for the Eastwood boys.

Wednesday 23rd March may be a date that the Eastwood High School S1 B team would rather forget as they lost 13-1  to Woodfarm High School B team.  It was always going to be a tough match and unfortunately, on this occasion, Eastwood did not rise to the challenge.

The game started and things looked promising with Woodfarm missing a penalty 5 minutes into the game.  However, they came back with a goal by the seventh minute and the game seemed to go their way from that point on.

The Eastwood player’s heads went down as Woodfarm continued to score bringing it to 2-0.  Eastwood’s Ross Carmichael then scored an impressive goal from 25 yards out taking the score to 2-1.  It was beginning to look hopeful, but by the end of the first 3rd Woodfarm were leading 4-1 and the morale of the Eastwood team was broken.

A further 5 goals in the second 3rd took the score to 9-1 and Eastwood were beyond recovery.  The game ended at full time with score of 13-1 to Woodfarm.  The goal of the game was Eastwood’s, however, a single goal was never going to be enough to beat Woodfarm on that date.

Eastwood High School has been announced as a school of rugby from August 2016 and will involve new S1 and S2 pupils.  We are the first school in East Renfrewshire to achieve this and only 1 of about 30 in Scotland.  School of Rugby pupils will have the opportunity to do physical exercise on a daily basis and aims to develop their physical, mental, emotional and social wellbeing.  For further information, contact Mr Reid in the PE department.

A massive well done to Imaan Manzur for placing 3rd in the Scottish Shotokai Karate Competition at Holyrood Sports Centre this weeked.  Imaan was competing in the U16’s category and at 13 years old this is an incredible achievement!

Some of Miss MacLellan’s S1s working together to build a group gymnastic sequence to music!

Erin placed 1st in the Scottish Nationals 1500m race at Bellahouston – 12 seconds ahead of 2nd place!!

Several of our pupils competed in the above competition at Helix Park, Falkirk on the 12th November:

Abtaha has been selected to compete in the 2015 ICC  World Twenty20 Qualifiers, an international women’s cricket tournament in Thailand from the 28th November to 5th December.