Thank you to all the kind parents who donated to Charity bags for school. We collected 226 kg @ 50p a kg, so raised £113.50. Add that to last terms amount and so far we have raised £296.30 this academic year, just from all your unwanted items.

After spending £5k on resources for the school our funds need replenishing and this will go towards that. We will be chatting with the school as to what we need to focus on next. Be part of that conversation at the Parent Council meeting Tuesday 14 March – 7pm in school. We really would like to welcome everyone in the parent forum. The more who come along, the more people we have to support the school.

Thank you again to all the parents who took the time to donate to charity bags for school.

Also we have a figure for the East Meets West event – the grand total so far is £382.20. We are still receiving donations, so a final figure will be given soon. Well done to everyone who helped make it a fun night.

It’s been a very exciting day in Primary 3! We took part in our very first Sumdog National Competition. It runs for a week and each pupil needs to answer 1000 Maths questions, set by Sumdog at their current level. All pupils in P3 have completed their online training which enables Sumdog to identify the level individual pupils are working at. Sumdog then presents pupils with level appropriate Maths questions which get progressively more challenging as pupils develop their skills, speed, accuracy and confidence. The teachers are able to instantly view pupils’ progress, areas of confidence and development and provide instantaneous feedback to pupils, in addition to the recognition given by Sumdog.

In the National Competition there are currently 138 qualified classes (with many more still to begin) and of those 138, P3 at Bellsquarry Primary are currently in 1st place! Class positions are decided by an average of accuracy and speed across all pupils participating in that class. We have two individual pupils in the national 2nd and 3rd place  – there are 3552 pupils competing! With 6 days to go there are still lots of classes that could overtake us but what an achievement so far! Lots of pupils have still to finish so hopefully our average score will become even better too!

Sumdog is currently only to be used in school, however, we are all looking forward to using it at home too after the Easter holidays! 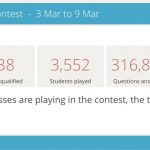 Primary One has been very ‘buzzy’ preparing for our class assembly next week when we are responsible for launching the school’s pollination initiative.  We have lots of exciting things planned and the pupils have been working very hard.  Thank you to parents who have been helping the children to learn the words for their speaking and singing.  A reminder to parents that on Friday, it would be appreciated if flowers could wear a bright plain t-shirt, the bees a black or yellow plain t-shirt and the two beekeepers, plain white t-shirts.

We have a special guest coming along, as well, to support our learning and teaching so it promises to be a bee-utiful morning!

Primary 5 have had a wonderful week…

In science, we have been investigating floating and sinking, which links to our Titanic topic. This week, we were experimenting with plasticine objects to test whether or not they would float or sink. We learned that it does not matter how much an object weighs – it depends on how much surface area an object has. Our plasticine boat floated and all of our other objects sank!

To view the above images as a PowerPoint Presentation, simply click on the first one and the screen should expand.  Next hit < or > at the side of the screen to navigate your way around the presentation.

Last Friday, some of us went to the James Young Cluster Numeracy Festival at the Crofthead Centre.

Firstly, back in class, we decided to split ourselves into two groups.  One group focused upon The Scottish Maths Challenge and the other group focused upon Numeracy Word Problems.  Next, we decided what information we were going to include on our stalls.  We had to look back at our previous work and decide which examples demonstrated our knowledge and understanding of Numeracy and Mathematics.  We also made up folders so people could read what we had been doing. Finally, we got large boards and presented our work for others to see.

At the festival, it was extremely busy.  We had teachers, parents and pupils from other Primary and High Schools.  They asked us lots of questions about our learning – we even had a woman whose children went to Bellsquarry and she was glad that we were still working as hard.

It was a great way to spend an afternoon talking about our learning – Mr Hunter even bought us all a bag of crisps for our efforts!

In Social Studies we have been learning about politics and the different political parties in Britain. We researched four of the main parties: the Conservatives, the Labour party, SNP and the Green party.
This week in maths we have started finding out more about decimal numbers. We have discovered that they are another way of writing fractions! We have also been using our mental maths skills to add and subtract decimals.