This resource is a fantastic way to help children develop and/or learn about these important life skills. 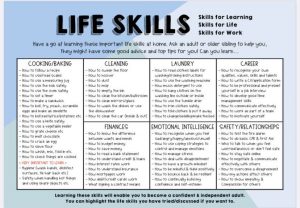 We have been really busy improving lots of areas of our learning this week!  Chief amongst these was our work on Sumdog.  There was a National Challenge this week and lots of the class were taking part to try and earn us a certificate… and it worked!  We came in the top 50 classes in the whole of the UK. Wow!!!

Here are some of our achievements in our own words:

Alistair – I can’t believe I got a certificate from Sumdog, because I never got one before.

Anna – We were learning how to do our WOW words.  We were reading our books and collecting WOW words.  I found “hypnotising”.

Zoe – we were being an audience in assembly and we have never done it really quietly before.

Lucinda – I have improved in my maths on Sumdog.

Amelia – I can’t believe we were in the top 50 of all the classes in the Sumdog National Challenge!

Reese – The whole entire class did Sumdog and some of the class got certificates from Mrs Green for answering over 1000 questions.

Maha – I went on Sumdog for the very first time.

We have done really well!

P2 recently finished their revision on Weight and Capacity. This was a fantastic opportunity for us to revisit our work and helped us to deepen our learning.  It was also a chance for us to exercise some of our Learning Muscles, such as Distilling, Collaboration, Revising, Interdependence, Absorption and Capitalising.

Here is a small insight into this work.  The ultimate aim was to make a set of posters for ourselves and others to help us remember and understand Measure.

Each table worked together to revise and note down everything we knew about each subject – in writing or pictures – then we peer-assessed the work and revised it further to make the improvements our peers recommended. This is the pupils’ learning in their own words and images. Here are some pictures of this process, and the final results. Can we teach you something new about measure?

Working in table groups to create the posters: 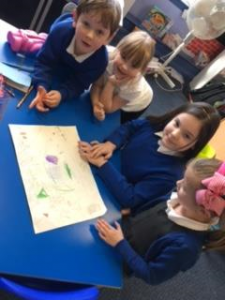 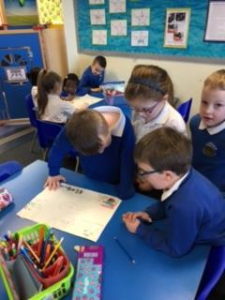 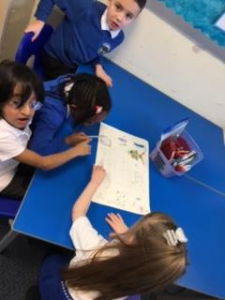 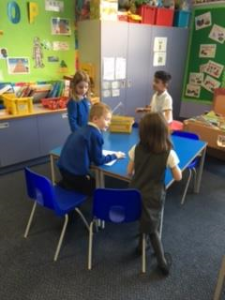 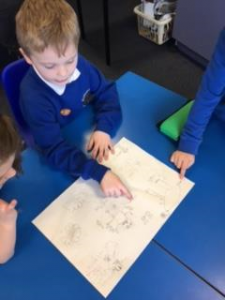 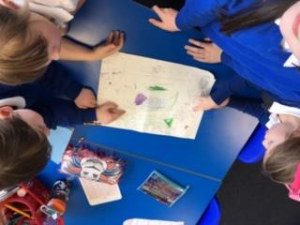 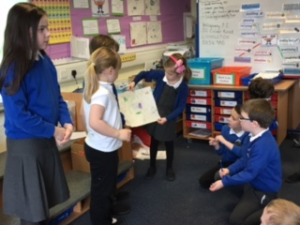 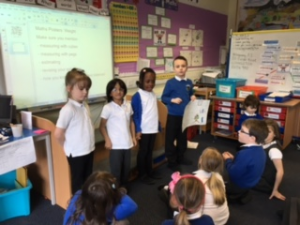 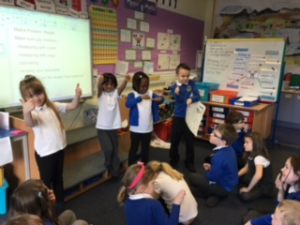 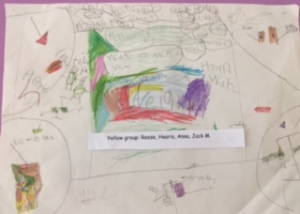 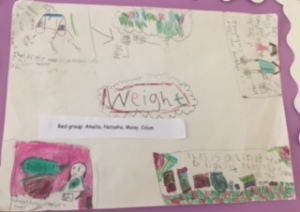 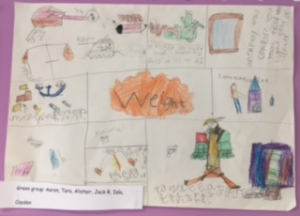 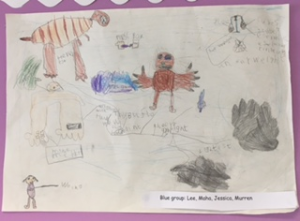 Over the last few months, P2 have been expanding their knowledge, understanding and skills to do with Measure. There has been a lot to learn about this topic and we have already covered Length, Weight and Capacity.

Over the last week or so, we took time to find out how much we could actually remember and if we could apply our knowledge. We revised what we knew about length and the children produced fantastic posters summarising their learning. It took us a long time and lots of toil to remember what we had learned as we covered this work way back before Christmas. It was even harder, however, to try to explain what we knew! We imagined we were trying to explain our learning to our penpals. This helped us focus on what was important and to make sure we included everything we needed to know. We used words and illustrations to get the information across.

This was a demanding task that required us to use all of our Learning Muscles and Thinking Skills.  As you can see, P2 did this in an exemplary way.

Have a look at our posters – can you see what we have been learning?

Thank you to parents for coming along to our PATPAL afternoon. It was a great success. The children were very excited to show their parents and extended family about what they have been doing in mathematical problem solving.

Please find a link to our i-solve booklet and our power point presentation in the section “Information for Parents” (above right).

We would also welcome parents to give us some feedback via the following link to Survey Monkey.

Please find a link below to a slideshow of photographs from our PATPAL afternoon :

Thank you to everyone who helped to make our PATPAL (Pupils As Teachers – Parents As Learners) session this afternoon such a wonderful success.

The P2 pupils relished the chance to work on their skills in a different format and to show the adults that attended what they have been learning.

If you weren’t able to join us today, ask your child what they were doing in the session and if they can show you some of the skills they have been learning.

In this post, you can find some of the dozens of photos we took of the session.  You can also find the hyperlink to the document named “Patpal”  that contains the instructions for each of the tasks, in case you want to have a go at home!

Happy New Year from us all in P2. It’s been a really short week and we quite tired after the Christmas holidays, but we have still done some quality learning. Here are some of the things we did this week.

We have been using Number Talks to help us find different strategies to do calculations. We came up with lots of different ways to do 6+6, 6+7 and 6+8. We noticed lots of patterns and used these to find the answers. We are getting really good at explaining our thinking.

We have been measuring with cubes in maths. We learned how to estimate – before you measure, you decide how many cubes long it think it will be. You can’t say any number. If it’s a ruler, it can’t be 1000 cubes long. It has to be a sensible answer. Once you have estimated, you count how many cubes it actually is. The answer doesn’t have to be the same as the estimate as it is meant to be a guess.

We have been practising for our Assembly. It’s going to be on Learning Muscles and all the colour of Thinking Hats. Watch this space for more information!

Our maths challenge this week was to use our knowledge of 3D shapes and nets to design packaging for a new museum gift shop. We had to work together in our groups, plan our designs and actually make a sample of our finished packaging. It was harder than it looks!

We have added some finishing touches to our PowerPoints in ICT ready to present over the next few weeks. We enjoyed adding transitions and animations to our slides this week.

In PE we have been practising our Scottish Country Dancing with Primary 5 ready for next week’s party. We’ve also learned how to do the Macarena and the Cha Cha Slide in case we get a chance to show off our moves over the holidays!

Our NYCOS music workshops with Mrs Poynter came to an end this week. We have had a great time working with her and wrote her thank you letters to show how much we enjoyed it.

Today we rounded off a very busy week with our Viking assembly for our parents to watch. We performed to a packed audience – it was standing room only in the hall.

Everyone was very proud of their performances and we are sure the parents enjoyed it too!

This week we have also enjoyed our Roald Dahl workshops, drama lessons from the Helen O’Grady Drama School, sent a representation to the gymnastics competition, made skeletons of 3D shapes in Maths, finishing off our Christmas Fayre crafts, and learned more about keeping safe on the roads.

We think that we’ll all need an extra lie-in over the weekend now!

For “Money Week” this week, Primary 2 had a look at money from different countries. We examined five notes in detail and spotted different pictures and money values on each note. Calum and Maisy noticed the Sphinx on a 100 pound Egyptian LE note –
Murren and Alistair looked at a 5 Canadian Dollar note and noticed tiny signatures on one side and people outside playing ice hockey on the other. This is what it looks like –

Jack M. and Jessica looked Mexican money – a 20 Pesos note. They noticed a man on the front of the note and a clear see-through window on the note as well.

Amelia and Jack R. quickly spotted a man wearing a hat on the front of a 10 Australian Dollar note.

Primary 2 knew that you can get American, Canadian, Ausralian and New Zealand Dollars!

Aaron and Isla spotted plants, flowers and two ducks on the back of a 10 New Zealand Dollar note and thought that those plants and animals must be on the note because they live in New Zealand.

Aaron found out about other currencies at home from places his parents have visited. His favourite holiday place is the Maldives Island. We discussed where we can buy foreign money and what kind of things we spend money on when we are on holiday. Jessica brought in 20 pence from home to show the class. Primary 2 described 20 pence as a small silver coin with six sides.

Aaron brought in money from lots of different parts of the world.  He had some coins and notes that are still legal tender, that came from the USA, Sri Lanka, Czech Republic and Cuba.  He also brought in some obsolete money from the member states of the Eurozone, including Dutch Guilders, Belgian Francs and Spanish Pesetas.  Very interesting – thanks, Aaron!