On Thursday the 5th of March we learnt about the enigma code. We learnt how Germans used this secret code to communicate with each other and how Britain and Poland tried to solve this code using machines.

We had to figure out the enigma code and tried to work out the message. The we had to make up our own code for our friends and our teacher and had to write a secret message. 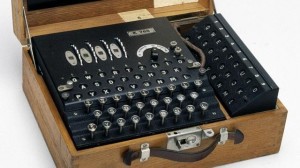 By Chrissie and Erin (P7)

On Thursday, we did research for our own V-E day party. we did the research because we didn’t  know what they would have had in World War 2.

We wanted to know what sweets, drinks, music and clothes we all found out a lot of stuff like Amy found out that the v sign (peace sign) you make with your fingers actually came from World War 2 because Winston Churchill was making a speech and and V stands for Victory. 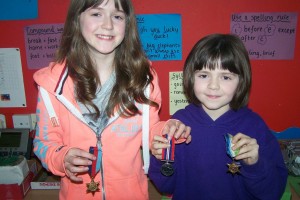 It was great to get to see real medals that we could hold and touch – Primary Sources. 2 of the medals they brought in were called:

We decided to learn more about WW2 medals and found out why certain colours were used in different ribbons, and what people would have got these medals for.

We designed our own medals for different awards and chose our ribbon colours very carefully: 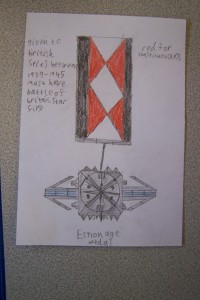 David created a medal for “Espionage” 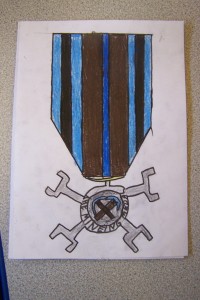 Erin created a medal for the Miners. The browns and blacks represent the ground and the coal. 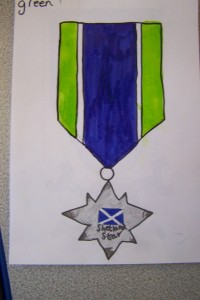 Maisie created a medal called “The Shetland Star” for any Shetlander who fought in the war. The blue represents the sea and the green represents the grass.

For the past couple of weeks, we have been looking at what it would have been like for a child living during World War Two.

We each created our own WW2 name and character. We had to make ID Cards – which everyone in Britain had to carry with them and Gas Masks which people also had to carry.

We have been practising what it was like by carrying our Gas Masks everywhere (including during lunch and the toilet!!) because we never know when a surprise gas attack might happen!

With Izzy, we have had a few drama sessions about Evacuation. We have been exploring how these children would have felt when they left their families behind and how they felt during the “Billeting” process where children were chosen to live at certain homes based on the way they looked.

This helped us to really understand the Evacuation process and how children really would have felt.

As our characters, we then wrote letters home to tell our families how we are and how we felt being evacuated.

On Thursday the 29th of January, Izzy Swanson came in to do some WW2 drama with us.

First we had to be children in a playground in 1939, we had to do something that they would have played in that time such as marbles, hopscotch, skipping and football.

Then we had to be evacuating children getting aboard a train. You were often in a carriage with nobody you knew, if you had a friend you would be very lucky!

When Izzy left we had to think about a name and a family for our character. I am sure the whole class enjoyed it and look forward to next time.

Last week, we started to make our Air Raid Shelters in pairs. We finished them this week. We gave each other comments to do with our shelters, what we liked and any advice for next time.

Here are a few of our finished air raid shelters! Can you guess what type of shelter they are? 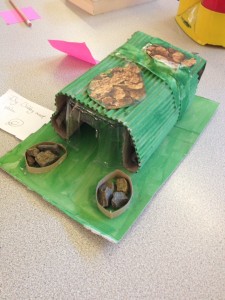 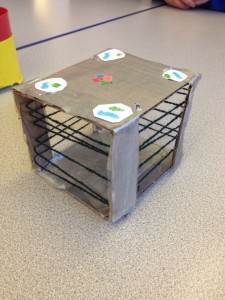 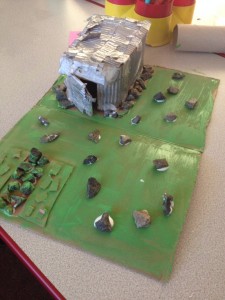 This week we moved the tables to make three different bomb shelters.

The shelters were called: 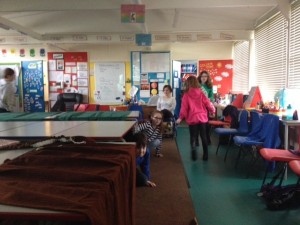 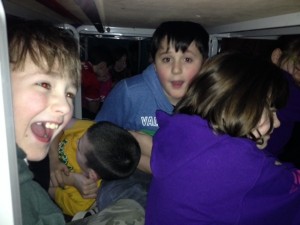 We all made World War 2 skylines. We had to paint the background warm colours ( Red, Orange and Yellow.) We drew the outlines of the buildings on black paper then cut them out and glued them on our backgrounds. They were really fun making!!!!!!!

We took pictures of them to show you how they turned out.. 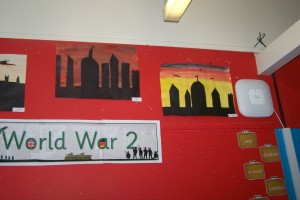 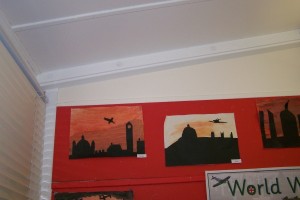 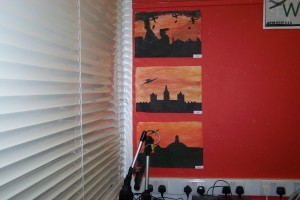 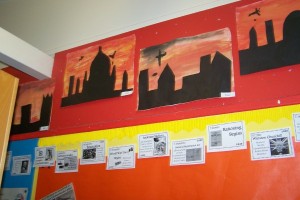 By Erin and Chrissie (P7)

This week we have been learning loads about World War Two but this is about the WW2 shelters.

We got to make our own Shelters with lots of useful things like cardboard and paint and sellotape. 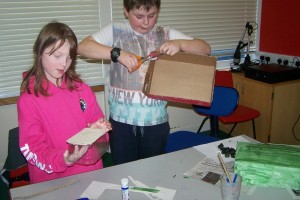 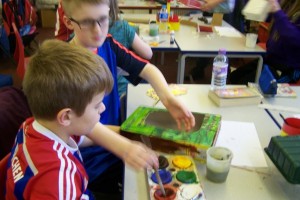 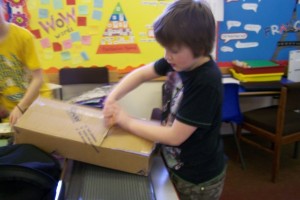 We also did a lesson in the afternoon about the WW2 shelters what we did is we put the chairs in a circle and our teacher Miss Calvert told us a lot of facts about the shelters in WW2. But every 5 to 10 minutes there would be a WW2 bombing siren that went off and we would have to go under the tables we used them as shelters. There was the Morrison shelter, the Anderson shelter and the underground shelter.

I thought it was really fun! 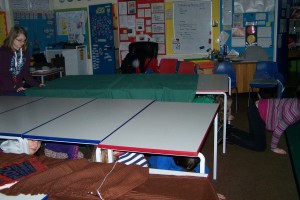 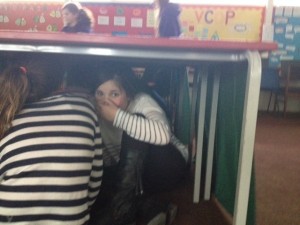 This term our topic is World War II.

This week we have been learning about how the war started and the countries involved and what side they were on.

The war started because The Nazi’s invaded Poland, Britain and France immediately declared war on Germany. The two sides were called the Allies and The Axis. The main countries in the Allies were Britain, France, Soviet Union (Russia) and USA. The Axis were Germany, Italy and Japan.

Some of us made WWII airplanes, we also started our Personal Projects about WWII.