We have had another brilliant week in P3IL.

In English and Literacy,  we loved having Fergus the storyteller come to visit our class and tell us all sorts of interesting stories! We then heard Whuppity Stourie which is a Scottish story. We went on to create our own story map and retold the story in our writing.

In Maths and Numeracy, we have been working on division. We have being learning many different division strategies such as repeated subtraction, using a blank number line, equal groups and arrays. We have worked very hard on this and are making great progress! Well done!

In our IDL, we have been working on our poems and learning more about Robert Burns. We have enjoyed reading some Scottish Fairy Tales and different Scottish poetry. We will be selecting the finalists on Tuesday  for our competition reciting the poem ‘Skatin’.

What a brilliant week!

We had an exciting morning on Wednesday. Fergus, the storyteller, came to visit us again. The children were thrilled to see Fergus again and remembered lots of the stories and songs he told last year. Let us share the stories Fergus told us this year…

Dylan – Fergus, the storyteller, came to visit us again and we were very pleased to see him! He told us stories about castles.

Amber – He told us a story about Mary Queen of Scots. She lived hundreds of years ago. Even though she had a husband, she wouldn’t let him be King because she wanted to be the Queen by herself.

Leah – She was in a battle and was trapped in a castle. She tried to escape dressed as a boy. One of the guards smelled her perfume and then her friend hit him with a stick, making his eyes go dizzy and then she escaped.

Reece – Fergus told us another story about a nasty King and a rooster.

Olivia – The rooster wanted the King to give him back the penny he stole from him.

Dylan – It was a gold penny.

Emile – The rooster has swallowed a lot of bees and then let them out his mouth and they stung the King so he got his gold penny back which he shared with his owner.

Welcome to our class blog this week!

We were all super-excited to have a Storytelling session from Fergus.  We reminded him of everything that we had done together last time and then he shared some new stories and songs.
– “Fergus the Storyteller told us a Roman story.” (Nadia)
– “Fergus came to our class and he sang songs with us.” (Beth)
– “When Fergus came in to our class he sang us a funny song.” (Mah Noor)
– “I liked it when Fergus was teaching us songs and stories.” (Emma)

In Numeracy, we covered a couple of concepts this week.
– “We finished up learning about money.  We used takeaway menus to find the total of the things we would like to buy.” (Emily)
– “We made our own menus and I had never heard of dragon fruit.  I put it onto my menu.” (Oscar)
– “We’ve been learning about money in our Maths stations.” (Adam)
We also learned about Roman numerals and practised reading and writing numbers using these.  Tomorrow, we are going to do some addition and subtraction sums, using Roman numerals!
– “I saw Roman numerals in my book.” (Rhys)
– “Big Ben has Roman numerals.” (Callan)

In IDL, we learned about the important buildings that would have been built in Roman towns and cities.  We learned their names, what would have happened there and compared them to modern-day.  We drew pictures of these buildings, to put on our brand new Romans display in class.
– “The temple was where they prayed to the Gods.” (Eli)
– “The thermae was where they went to wash.” (Karina)
– “The basilica was the law court.” (Carly)
– “It doesn’t sound comfy to sit on stone seats at the theatre.” (Ava)

Have a lovely weekend!

What a great first week back!

In Maths and Numeracy, we have been working more on multiplication. Miss Low was blown away by the classes hard work this week! We used many different strategies to solve our multiplication problems. 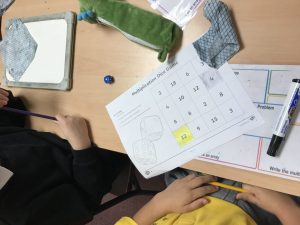 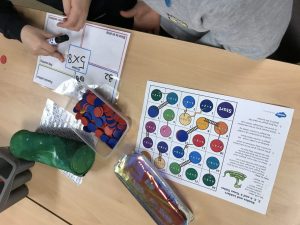 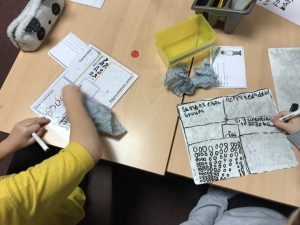 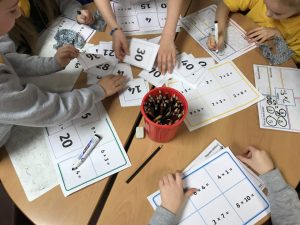 For our IDL, we have been learning all about Robert Burns and his poetry. We have learned all about his life and read some of his poems.

Looking forward to another week of learning!

Well it might be our first week back but that hasn’t stopped P2/3 beginning 2020 with some super-duper learning. Let us tell you about what we have been learning this week…

Aimee – We have begun reading The Gruffalo in Scots and we have been learning Scottish words like ‘Help ma boab!’

Lucie – We have been learning spelling stories like ‘big elephants can’t always understand smaller elephants.’ This helps us spell because.

William – We have been learning about symmetry. Symmetry is a line that cuts a picture in half. You can use a mirror to find symmetry.

Amber – We have been practising times tables and division. We have been counting in 2s, 5s and 10s to help us.

Erin – We have been learning about the words ‘less than’ and altogether. ‘Less than’ means you take away and ‘altogether’ means that we add.

Emile – We have been learning about Fairtrade.

At Sunnyside we use online learning journals as part of our reporting process, these provide specific learning learning information and next steps for your child.

If you have not accessed your child’s learning journal or have forgotten the password, please let us know and we can help.

We were all happy to see our friends again this week.  As the week went on, we were all feeling more awake and back into our usual routine!

In Numeracy, we continued the work about money that we started before the holidays.  Everyone was learning to find the total of 2 or more amounts, using the different addition strategies that we already know.  We linked our learning to real-life experiences, talking about different shopping scenarios.

In Literacy, most of our work this week has been about reports.  We read reports about different animals and learned how to find specific information in a report, to answer various questions.  We learned to start with the vocabulary from the question, find those words within the report and then ‘read around’ them to find the actual answer.  At the same time, we also learned some amazing facts about animals!
– “Pythons can live for 40 years.” (Tyler)
– “Leopards eat their prey immediately after catching it.” (Eli)
– “Nocturnal means that foxes move around and eat at night.” (Jamie-Lee)

We then used what we had learned to write a report of our own – ‘All About Dogs’.  We used headings to organise the information and had to make sure that the report contained only accurate and relevant facts.
– “Classification – Dogs are vertebrates which means that they have a backbone.” (Mah Noor)
– “Appearance – The colour of dogs depends on what type they are.” (Cole)
– “Habitat – Some dogs are rescued and go to live in a rescue home.” (Hannah)
– “Behaviour – Dogs like to play with chew toys.” (Lily)

We started our brand new IDL this week – we will be learning about the Romans.  We all had the chance to say what we think we already know and what we would like to learn about.  We had some ideas about some of the things that we would like to say, make, write and do.  We started the project by placing the Roman era on a timeline of historical events and we studied the story of Romulus and Remus to discover how Rome was built and got its name.
– “Roman soldiers wore armour.” (Lola)
– “Rome is in Italy.” (Carly)
– “I’ve got a book about Rome.” (Rhys)
– “Romulus killed Remus.” (Adam)

We’ll tell you more once we learn more next week!

We had a lot of fun this week in P3IL on the run up to Christmas!

In Maths and Numeracy we have been learning to conduct a simple survey and create a bar chart on the IPADS. We were looking at different types of art we want to study. 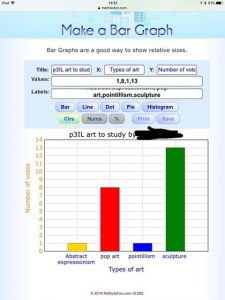 In English and Literacy we have been learning to write a story independently. We have also been working more on our reading strategies.

In our IDL, we have been finishing off our Australia topic. We have been enjoying reading books about Australia. Today we got to taste lots of different healthy foods and even try vegemite. Everyone did a great job trying foods they may never have had before. We got to try cantaloupe, melon, watermelon, strawberries, cucumber, oranges, apples, mangetout, crackers and vegemite. Yum!

Have an amazing Christmas and New Year!

Welcome to our last class blog of the year!

In Literacy, we have been learning how to answer questions in full sentences, rather than 1 or 2 word responses.  We learned how to use words from the question to help us to form the answer.  We had to make sure that the sentences were grammatically correct, and that they contained the necessary capital letters and full stop.

In Numeracy and Maths, we learned about 2 different problem solving strategies – ‘Draw a Picture’ and ‘Use Real Objects’.  We used these strategies to solve different problems.
– “The penny problem was really tough.  I thought I had worked it out but I actually hadn’t!” (Erin)
– “The Christmas bauble problem was easy for me because I worked out all of the different colours I could use.” (Rhys)

In Science, the P3 children made a magnetic game.  We all designed our very own town map and drew a Santa with his sleigh.  We attached magnets to the sleigh and used another magnet to guide Santa around the town, delivering presents on his way.
– “It’s hard to control because the magnet is making the other magnet repel.” (Eli)
– “If I use the right pole on my magnet, I can get Santa to move.” (Oscar)
The P4 children have designed their own Christmas pictures, which had to include.  Tomorrow’s job will be to build an electrical circuit which will light up the bulb on Rudolph’s nose!

We wish you all a Merry Christmas and a Happy New Year!
See you in 2020!

We have had a very busy time on the run up to Christmas!

In Maths and Numeracy this week we have been learning about measuring and length. We started by doing non standard units of measures before moving onto measuring using metres and centimetres. 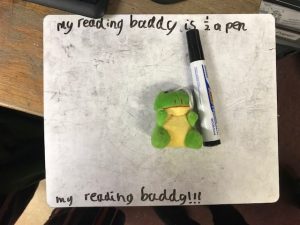 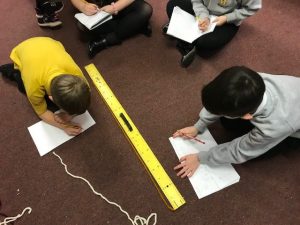 In English and literacy we have been learning to write instructions for how to wrap a present. We had a lot of fun wrapping a present with Miss Low following the instructions very closely, even if it was a bit silly and funny!

In Art and Design we have been looking at many different types of art and we had a vote for what we wanted to learn about most. Sculpture had the most votes so we had some fun designing our own sculpture. We look forward to beginning to try creating our own mini sculptures using found objects.

Looking forward to the last week before Christmas!