Today Sgoil a’ Bhac canteen celebrated International School Meal Day with a special menu with an Indian theme. The menu included samosas, beef curry, pilau rice and naan breads. As well as preparing this delicious international feast, our catering team got into the spirit of the day by dressing up for the day.  We’d like to thank our canteen staff and all the children who enjoyed our special feast. 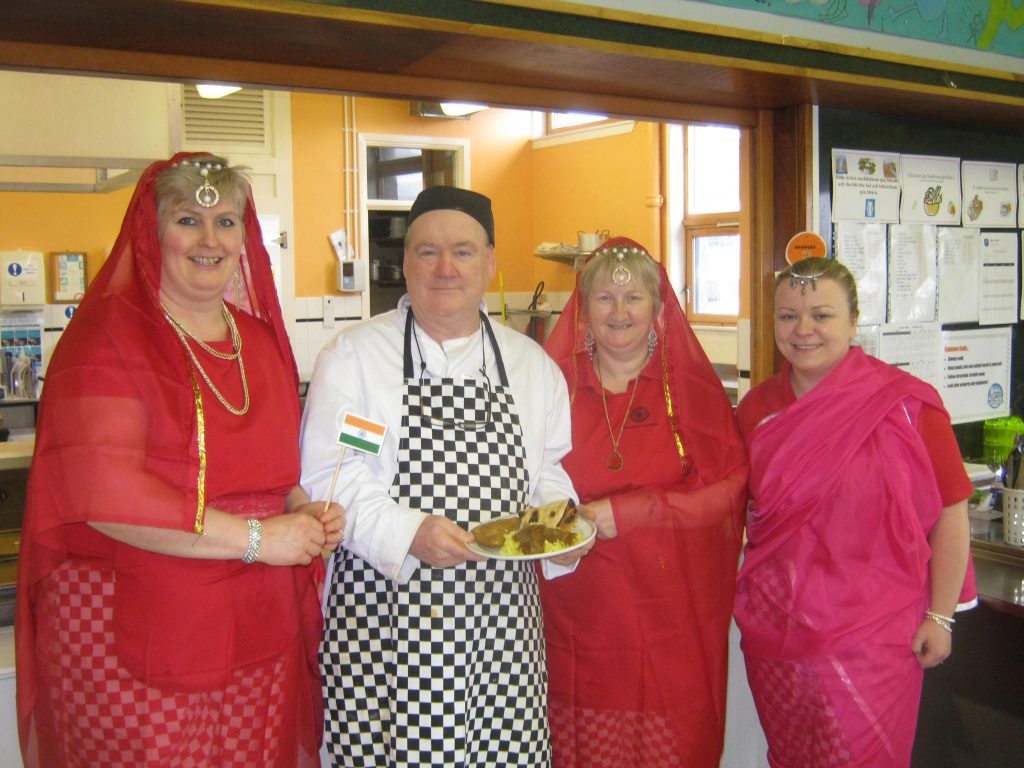 Last week, we had a visit from Mr DR Macdonald from Bethesda Hospice to collect a cheque for £428.38.

This was a presentation of the funds raised at Christmas time through the raffle of the cake made by our former cook, Mary Stewart and from the silver collection on the concert night.

We’d like to thank everyone who gave so generously to this cause.

With the help of Mrs Macrae, pupils organised a non-uniform day and bake sale in aid of the ‘God is Good’ nursery school in Uganda.

Ishbal Mackenzie came to the school to collect a cheque for £245.40 for their appeal to support the Ugandan school.

Once again, we’d like to thank the children and parents who contributed to this very worthy cause.

A few months ago, the school took part in the Lewis Soccer 7s qualifier and got through to the next round.  Last week we went to Tarbert to play. the Western Isles qualifier.

Like last year, the winner would go to Dundee. We played against Daliburgh, Sir E Scott and Stornoway Primary. On the way, the roads were bumpy and the nerves were kicking in but that did not stop us playing our very best!

We played straight away against Daliburgh and we won 3-0, which was a relief.  Next up was Sir E Scott and we won by an impressive 6-0. Then our nerves kicked in.  We were in the final against Stornoway Primary. Stornoway struck first with a good goal. Our heads were full of negativity and we thought there was no way back… until we reminded ourselves of our success last year. We had been losing against Stornoway Primary but managed to win in the end.

After our team talk, Stevie Mutch went on a superb solo run and scored a fantastic goal. We had the momentum and that secured us the winning goal – although Stornoway scored it!  Stevie had crossed the ball into the goal mouth which was then accidentally converted in by the opposing team.

The final score was 2-1 to us. So we are on our way to Dundee on the 26th of March again and we cannot wait!

All Western Isles schools publish a revised School Handbook in January of each year. The latest issue of Sgoil a’ Bhac’s handbook has been published in the ‘Documents’ section of the website and paper copies are available from the school office on request.

The handbook addresses all aspects of school life, summarises policies and provides information about the work of the school. It is a good point of reference if you have any questions about the school.

Congratulations to all our achievers for January. They were awarded their certificates at assembly last Friday for hard work and improvement in maths, reading and language, good behaviour, being helpful and setting a good example to others.

Children who will be four years of age by 28 February 2015 are eligible for infant enrolment in Gaelic and English Medium. Parents who wish to enrol their child(ren) are requested to do so at the school office any day at 3.00pm during the week commencing Monday 2 February 2015.

Parents are asked to ensure that they bring their child’s birth certificate.

Eligibility for early learning and childcare throughout the year is as follows:

Parents are asked to ensure that they bring their child’s birth certificate.

A press release this evening from WIEPCG confirms that all schools are closed to pupils tomorrow, Monday 12th January. Staff should attend as normal.

Although a significant number of trees have fallen around the pitch, the school received no damage during the storms. At the moment, we expect Sgoil a’ Bhac to open as normal on Tuesday. Please continue to monitor our website and social media feeds for the latest information.

The extreme weather over recent days has been very challenging and we are aware that many of our families will have suffered damage to homes and other property. We hope that loss and damage has not been too great and we look forward to welcoming our pupils safely back to school on Tuesday.

In light of current weather forecasts for the next 48hrs, Comhairle nan Eilean Siar has decided to close all schools to pupils and staff on Friday 9th January. We expect schools to be open as normal on Monday 12th January. Please continue to monitor the school website and social media feeds for the latest updates.