A few months ago, the school took part in the Lewis Soccer 7s qualifier and got through to the next round.  Last week we went to Tarbert to play. the Western Isles qualifier.

Like last year, the winner would go to Dundee. We played against Daliburgh, Sir E Scott and Stornoway Primary. On the way, the roads were bumpy and the nerves were kicking in but that did not stop us playing our very best!

We played straight away against Daliburgh and we won 3-0, which was a relief.  Next up was Sir E Scott and we won by an impressive 6-0. Then our nerves kicked in.  We were in the final against Stornoway Primary. Stornoway struck first with a good goal. Our heads were full of negativity and we thought there was no way back… until we reminded ourselves of our success last year. We had been losing against Stornoway Primary but managed to win in the end.

After our team talk, Stevie Mutch went on a superb solo run and scored a fantastic goal. We had the momentum and that secured us the winning goal – although Stornoway scored it!  Stevie had crossed the ball into the goal mouth which was then accidentally converted in by the opposing team.

The final score was 2-1 to us. So we are on our way to Dundee on the 26th of March again and we cannot wait!

Sgoil a’ Bhac recently received a sponsorship contribution of £165.60 from TSB towards our travel costs for the North of Scotland Soccer Sevens tournament our team participated in last term. Our team was representing the Western Isles in this national event, which was held in Dundee. As main sponsors of the competition, the TSB provided financial support to the participating schools to help with the expense of travel. 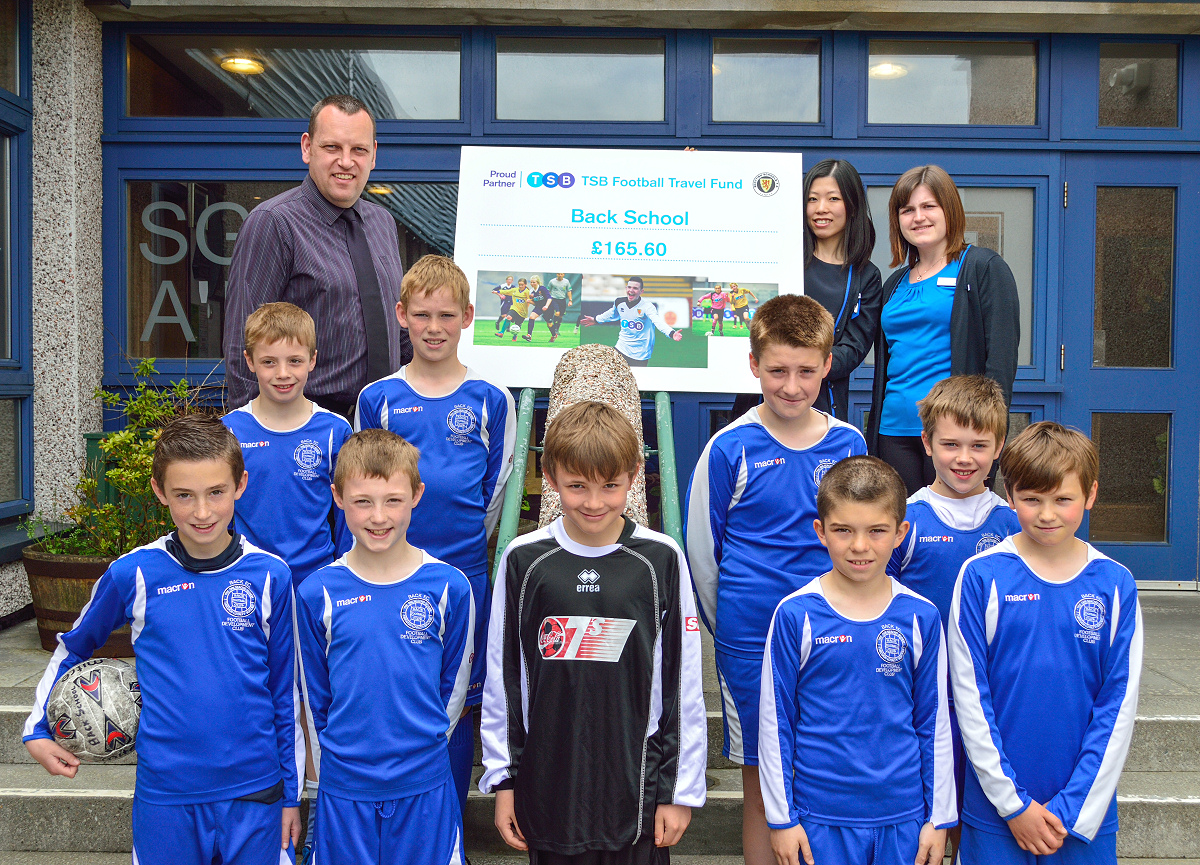 Our boys who took part in the North of Scotland Soccer 7s finals in Dundee have arrived home safely. They were all praised throughout their trip They qualified for this prestigious competition by winning the local heats in Stornoway against Lewis and Harris schools earlier in the year.

In the finals they played against nine other teams from Inverness, Aberdeen, Perth, Dundee and Skye. The standard in the competition was very high and the games were tough but the boys tried their best throughout. They won two of their games and drew another two but lost five games by a small margin. Their wins included a 2-0 victory over nearest rivals Portree.

The team, James Maclennan, Euan Anderson, Lee Maclean, Hector Macdonald, Steven Mutch, David Anderson, Ross Maciver, Calum Maclennan and Andrew Macdonald, were described as being a credit to the school and the community for their exemplary behaviour, positive attitude and commitment throughout their trip and the eight games they played.

We would like to thank Mr Dano Macdonald, Mrs Lena Maclennan and Mrs Chrisell Macleod for escorting the team. We’d like to also thank Dano for training and preparing the team for the competition in recent weeks. Thanks as well to the parents of the boys who supported us with fundraising and organising the trip. Well Done boys!

All of us at Sgoil a’ Bhac would like to say a huge well done to our boys football team who were competing in the North of Scotland Soccer 7s Finals in Dundee today. They played their best throughout against some very strong and experienced opposition. Staff travelling with the team reported that they were a credit to the school and the whole community with their behaviour, attitude and commitment.  We’re looking forward to welcoming them back to school tomorrow afternoon.

We’d like to thank Mr Macdonald, Mrs Maclennan and Mrs Macleod who travelled with the boys and extra thanks to Mr Macdonald who worked for the last few months training and preparing the team.

We hope to have a full report and photos available after the team return.

Fixtures and results for the games being played in the Soccer 7s finals in Dundee today (Updated as they happen).

Our football team set off this morning for the North of Scotland Soccer 7s finals in Dundee tomorrow. They had to travel earlier than planned due to the worsening weather forecast today.

Good luck and safe journey from everyone at Sgoil a’ Bhac.