The special guest visitor we were hosting today was Clyde, the 2014 Commonweath Games mascot. The children had a presentation from the organisers about the Commonwealth Games and then Clyde entertained everyone with some fun and games! 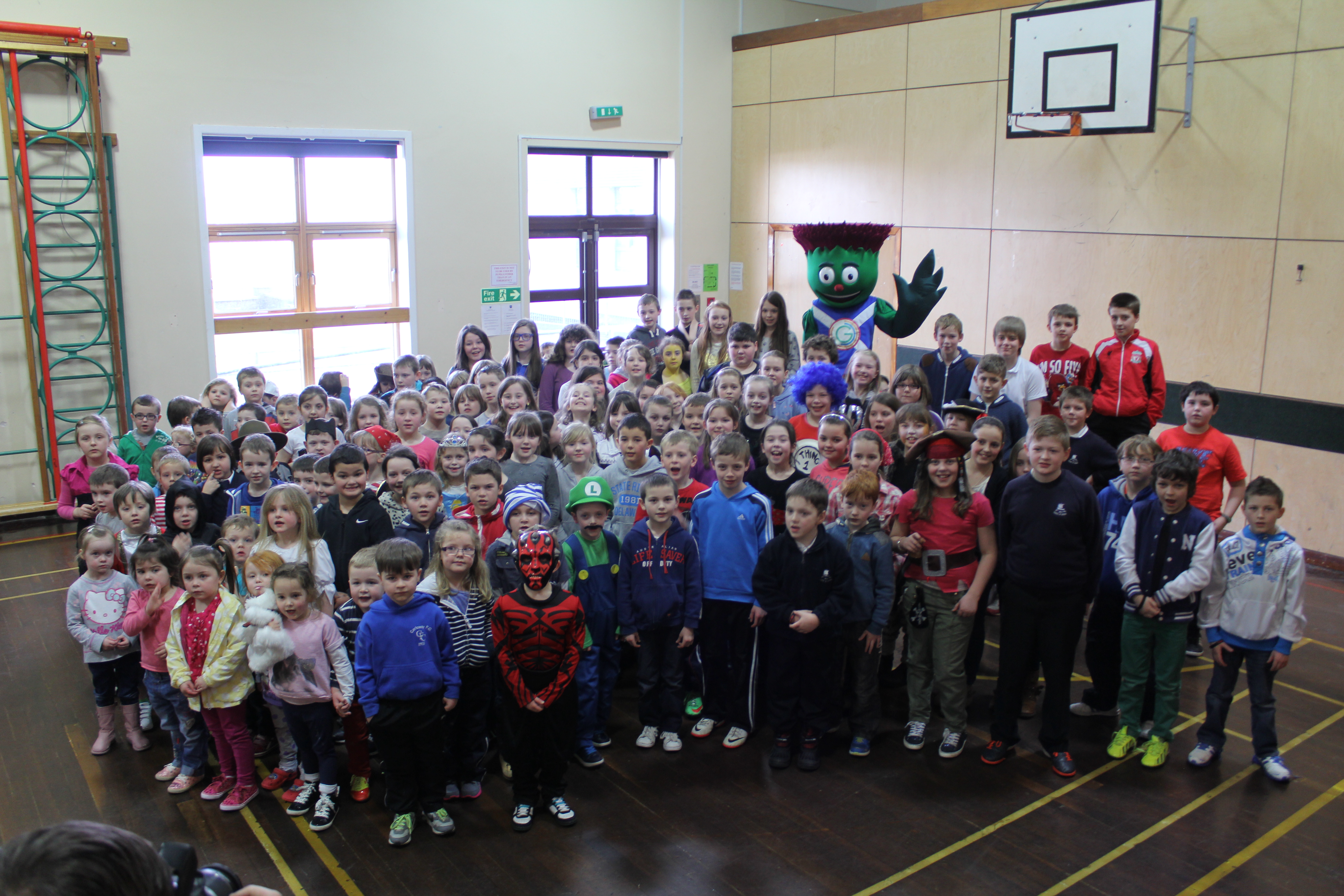 Clyde with the pupils of Sgoil a’ Bhac

Clyde with all the children from Back and Tolsta.

The members of our football team and their parents organised a non-uniform day and bake sale today to raise money for their football trip to the mainland next month. They are still busy selling baking at lunch-time today so we’ll be able to announce a grand total of funds raised on Monday.

The team are photographed here just before opening their stall this morning. Thank you very much to all the parents who donated baking and to all the families across the school who sent in money for the non-uniform day and the baking.

There were some pupils today who chose to dress up rather than down for our non-uniform day!

We will be holding a non-uniform day on Friday 28th February to help raise funds for our football team to travel to Dundee to compete in the North Finals of the Scottish Soccer Sevens Championship. We would like to ask that any pupils coming in to school without uniform on that day make a donation to the trip fund. In addition to the non-uniform day, we hope to have a bake stall operating.

Sgoil a’ Bhac will be representing the Western Isles in this competition and will be playing against teams from Inverness, Aberdeen, Perth, Dundee and Skye. The finals will be held at Dundee University on Thursday 20th March. It’s a major achievement for our team to have qualified for this stage of the competition and we want to support them by helping with fundraising for some of the costs.

Active Schools are currently offering support and training to parents who may be interested in running after-school sports-based clubs at Sgoil a’ Bhac. Any parents who wish to declare an interest in this initiative will need to complete the form below and submit it to the school office by Friday 28th February.

G1-3 have been having lots of fun in class P.E  this term.  We know how important it is to be healthy and to keep fit.  We have been learning lots of new team games, doing circuit training and developing our climbing and balancing skills

on the Jungle Gym.

We are starting to get very excited about our school trip in June.  This week we got to vote to decide what six activities we will do while we are there.  There were lots of different options so now we just have to wait to see if we managed to get our top choices!

EP7 are organising a film afternoon to raise funds for the trip.  We are currently doing some market research to help us finalise the details.  GP7 will also be helping us out on the day to organise everything.  They hope to organise another fundraising activity in April.

This week we sent home our pupil profiles to parents.  This showed a selection of our work in maths and language over the last three months.  It gave us a chance to talk to our parents about what things we enjoy and what things we need to work on in both areas.  We hope that all the parents enjoyed seeing them and reading the comments!  We will be adding more to them and sending them home again at the start of June.  This time we will be selecting our own favourite pieces of work, in all areas of the curriculum, for inclusion in our profiles.

Pupils from Sgoil a’ Bhac have been competing throughout this winter in the Lewis and Harris Cross Country Winter Series. The third and final race in this competition was held on Saturday 7th February and our school was well represented in the field of runners. We’d like to give special mention to Steven Mutch from P6 who was the winner on Saturday and overall series winner in the Under 11 boys.

Thank you to Mandy Gillies for providing the photo and for organising the school team for this race. Thanks also to the staff who helped the runners prepare for the Winter Series with training runs during the school day.

Our Parent Council raised an amazing £845.76 on Saturday with an all-day bag-packing stint in Tesco. The Parent Council and the school would like to thank everyone who volunteered to help on the day. All your efforts are much appreciated and the funds raised made all that work worthwhile.

Today we invited Mr Macdonald from Bethesda Nursing Home to the school to receive two donations totalling £200. The first donation was from the Parent Council and the second was from the school.  They are in addition to the money raised directly by Bethesda by their attendance at our Christmas Concert.

We would like to thank Mary, our cook, who made a Christmas cake that was raffled at the concert in aid of Bethesda.