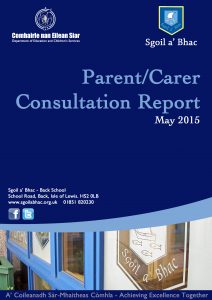 Following completion of a survey of parents of Sgoil Araich Loch a Tuath and Sgoil a’ Bhac in May 2015, the school has published a report of the findings. The report concludes with an action plan that sets out the improvements we are planning based on the opinions expressed through the surveys.

The report can be downloaded and viewed using the link below.