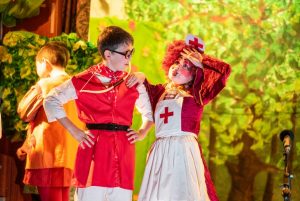 The Perfect Panto
On 12th of December Port Ellen Primary School put together a fabulous pantomime called “Robin and the Sherwood Hoodies,” I had overheard in the co-op from an old lady that the panto was absolutely amazing she had never laughed so much. The panto was fully packed and we sold out instantly the director of this panto was are P6/7 teacher Mrs. Clark.
ROBIN AND THE SHERWOOD HOODIES! 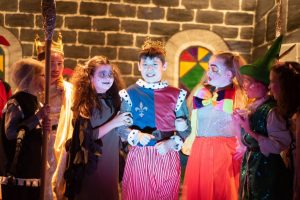 P6/7 were the main actors of the panto but it included the whole school.Are main person taking lead role was Harmoni as Robin Hood.The people on stage like to include the audience we had many scenes when we did things to the audience for example,we threw a bucket of confetti on them. Personally I thought that the panto was amazing everyone put so much effort and they were happy and cheery the whole way through.

The acting was on point every one was always doing something on stage either saying their lines or reacting to what people where saying. It wasn’t just acting it was also the singing and dancing.Most people said it was fine when the curtain was closed but when it  opened and saw the crowed they’re heart started pounding.

The costumes were absolutely beautiful and I cant miss out on the scenery,There was a dungeon/castle which I had helped out on making it and then there was the forest with amazing green glitter all over it. 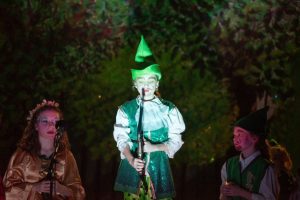