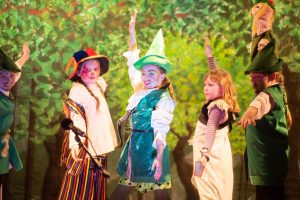 This year our panto was Robin Hood and The Sherwood Hoodies!

After hours, days, weeks of trying to make this perfect, sensational, we did it! Finally the curtain has risen, the people are in place, its show time… there was laughs over here and boo’s over there, it was falling right into place and I personally think it was marvelous. I also think everyone was splendid whether it was there character or there expressions and they were just phenomenal. The panto occurred on Thursday the 12th of December and Friday the 13th of December. So I would like to thank port Ellen primary for being amazing and just great at doing what they do best.
Main Stars:
Narrator: Morgan MF, King John: Braeden MG,
Robin Hood: Harmoni E, Merry Men: Millie, Dylan, Phoenix, Kayla, Aiden,
Maid Marion: Dearbhla N, Grabbit: Drew B,
Nursie: Charlet M, Bolt: Evie C,
Sheriff: Orla C. 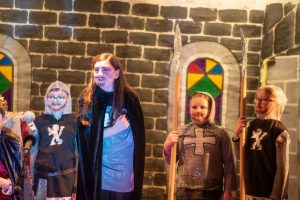 The funniest sounding panto I have ever heard of. The puns were knee-slapping good, the costumes were stunning and the ctors were just beautful. We had a variety of different characters like a panto dame who was Charlet Munro as Nursie Gusset Gerty, and our dashing, smashing, excellent hero Robin Hood played by the amazing Harmoni Edwards, and we cant forget the chief of mischief the sheriff of nottingham played by the fabulous but evil Orla Campbell. As I have said we had an amazing cast like primary 5 being the gaurds and primary 4 beig the main barre boys along with primary 1/2/3 being extra barrel boys.

My summary of the panto: Normal people of sherwood forest are there poor and penniless and yet paying taxes to that nasty sheriff of nottinghm but then the people of sherwood hire robin hood and his merry men. As the merry men shoot arrows at people and scare off cowards they save sherwood from despair and once all of that is over king richard puts things and matters right. There for sherwood is saved and everyone lived haooily ever after, and then the curatin had fallen.

Morgan MF:” It could have been better but it was still very entertaining and enjoyable.”

Millie H: “I think it went super well and everyone was brilliant and the songs were fabulous!”

Christopher J: “Even though there was mistakes it was still really great and I would love to do it again!” 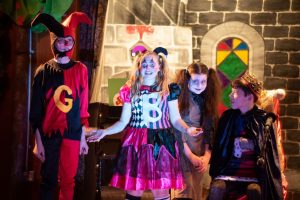