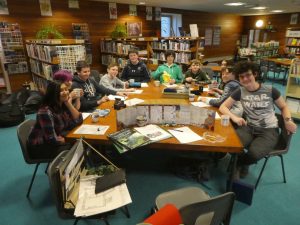 Ready for the continuation of The Brownie of Breckness,
an adventure set in an Orkney landscape, history, and folklore inspired setting

A Brief History and Overview of Dungeons & Dragons at Stromness Academy 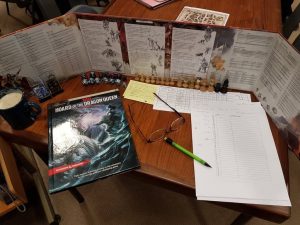 Dungeons & Dragons (Published by Wizards of the Coast) is a long established tabletop role playing game, first published in 1974.  It has now gone through several editions and can now be played online using virtual tabletops online like Roll20 or Fantasy Grounds.  There are many groups streaming on Twitch as well as videos, podcasts, etc. available via YouTube.

D&D at Stromness Academy was introduced in the early 2000s when a couple of pupils, who had played it outside of school, asked if they could run a game in the library. From there on in the D&D activity, after school on a Tuesday really took off, with around seven regular players. The Librarian, Frances Sinclair, became hooked (she had played briefly just before moving to Orkney in 1992) and wrote her own adventure set in and around the region of Tarlant, with the main adventure taking place in a rather large castle, full of oozes, vampires, skeletons, and other such creatures to battle, along with the arch enemy Galesh, who had taken over the castle from Lord Egreb.  These halcyon days of D&D gave us some long sessions, well, for as long as we were allowed to stay after school (2-3hrs) in those days.  We had one player who carelessly used a ‘bead of force’ on three separate occasions – killing his character on each occasion, but it did save the rest of the party.

These early games were played briefly using 3rd edition, then on to 3.5e.  In 2008 we switched to 4th edition over which, there was many a debate about it’s complexity and we certainly found that game play was much slowed down. 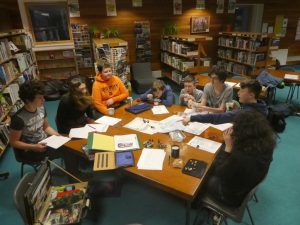 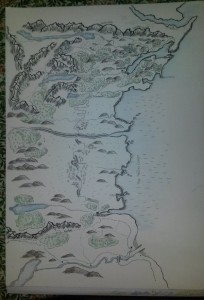 The Librarian created a new adventure for 4th Edition, Adventures in Rovanna.  This was played with friends outside of school as well as in school.  It was effectively a ‘road trip’ through the Wilderland from the town of Silverwell to Hunstford in Rovanna. It started badly with a ship wreck on the wild coast, coming ashore in a haunted ruined village (Up the Wild Coast written by F. Sinclair).  PCs (Player characters) were given several reasons, depending on who they spoke to or what they heard in the port town of Silverwell, to head northwards – a missing elf on the i’Tol; a missing Halfling; a couple of letters to be delivered; the possibility of removing bandits from the Wilderland and a general awareness of something not being right in the region of Rovanna around the principal (small) town of Huntsford.  Further development of the adventure arc includes sidequests in Huntsford and surrounding area.  Some, but not all the events the PCs came upon were linked to ‘something’ bigger – like any good D&D adventure. 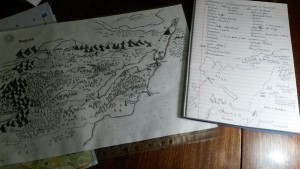 A couple more pupils took on the role of DM (Dungeon Master) which proved helpful as there were enough participants for three groups.  By now we were playing both on Tuesday after school and during the Friday activities period. As of 2017, a further [very] short session was introduced and played on a Thursday lunchtime and it became known as ‘Luncheon & Dragons’. Pupils are allowed to bring their lunch in (not hot food) where Mrs S or a pupil runs a 30-40 minute session.

Players have come and gone.  The group has shrunk and grown over the years, but there are still a core group who play regularly. Our journey into 5th edition D&D started with the Librarian’s own copy of the Starter Set, which has gone back to a broadly similar (in some respects) mechanics of 3.5 and earlier.  Certainly, encounters (battles with enemies, etc) are now much quicker and smoother to run.  Hoard of the Dragon Queen and Curse of Strahd, published adventures from Wizards of the Coast have also been played. It is difficult, though as we only have 45-50 minutes for a session (school timetable changes lost us 15 minutes off Friday activities and 20 minutes off Tuesday’s session).  There are now groups playing during Friday activities, three of which are DM’d by pupils running their own or published adventures. One pupil has run a 3.5e D & D game and another was working with d20 Modern.

By September 2018, we had a record 39 pupils taking part in Friday RPG activities, 31 of whom play D&D, with 8 playing Magic the Gathering. This was over 10% of the school roll. Five pupils and Mrs Sinclair now run RPG games, which included D&D, Pathfinder and Starfinder. 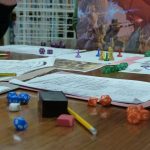 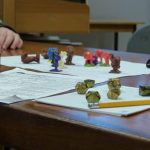 Since the end of March 2020 when the country went into lockdown due to the COVID-19 pandemic, an online D&D group was set up to enable a small group to continue playing and keep contact with each other. After a request to Roll20, an online virtual tabletop, to maybe get the virtual Essentials Kit: Dragon of Icespire Peak for free or at discount, Mrs S was delighted to be given a lifetime Pro account to enable us to continue to play and to bring D&D to new and experienced players alike. Mrs S went on to purchase the module herself and despite being back at school since August, and our Friday D&D activity now restarted, the online game continues. 2021 started with another lockdown, thus the online group has continued. New members have come and gone; not everyone finds online play easy and we now have a regular cohort of 4-5 players every Friday.

Over the years we also have briefly dabbled in other RPG systems such as Vampire the Requiem, Call of Cthulhu, Warhammer RPG, Necronomicon, Dark Heresy, and more recently, Pathfinder, and Starfinder. There are many other systems out there once you are hooked including Savage Worlds, Open Legend, to name but a very few – too many for us in our short sessions to try, although if pupils want to introduce a new system, they are welcome to do so.