The library is as busy, if not busier than ever, especially during leisure times – in the morning before classes start and at lunchtimes.  Pupils can do a variety of activities at these times.  There are the regular activities, described below, as well as our annual events.  Our Poetry Picnic is this Thursday, 6th October to celebrate National Poetry Day.  The theme is ‘Messages’. After the October Holidays we will have another lunchtime session of storytelling for Spooky Happenings.

A small cohort of pupils come to the library before its official opening time, presumably because they want first dibs on the PCs, but they come on the condition that they help with shelving and shelf tidying.  Their ‘enthusiasm’ for this means the shelving trolley is usually not too full.  Sometimes books aren’t in the correct place, but this is a minor inconvenience.  Mornings are often the time when some pupils are frantically finishing (in some cases starting, I suspect) homework, or printing it out.  Others will read quietly, but in the main mornings are a gentle run in to the school day with a bit of a chat.

Many will go on the computers to play games in the morning or at lunchtime, although those wanting to do school work will always get priority.  This system seems to work well, with only the occasional gripe when someone is asked to come off a PC to let someone work.  We keep an eye to the games pupils are playing as well as ensuring both games and any YouTube videos they watch are appropriate for viewing in the school.  Pupils are aware of and accept these limitations to use.

Board games such as chess, draughts and Connect4 are popular at lunchtime.  These are kept on shelves so pupils can help themselves.  A new Draughts set has recently been purchased and donated by the Librarian as we only had one set.  One wonders whether there is scope for a peedie competition? 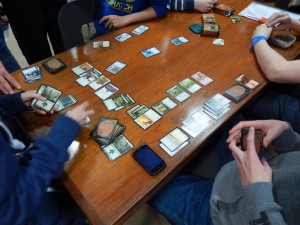 thering, an RPG card game where opponents battle each other is still very popular, both at lunchtime and during Friday afternoon activities.  It was introduced to the library in the late 90’s and has been played ever since.  We have also run a couple of tournaments in the past, and the time may well be ripe for another one.  Watch this space!

Friday afternoon Role Playing Games activity is also more popular than ever with 23 pupils attending. Eight play Magic the Gathering in the Upper Library whilst the rest play Dungeons & Dragons, in three groups.  This year we have 7 beginners which bodes well for the future of this activity.  The beginners group of 5 very enthusiastic S1 pupils is DM’d (Dungeon Mastered) by the Librarian, Mrs Sinclair, playing the published Starter Set adventure, Lost Mine of Phandelver from Wizards of the Coast.   An S3 pupil leads two older beginners in his more experienced group of players playing a 5e D&D homebrew Sci-fi type of game.  A further group led by an S3 girl playing 3.5e D&D.  More information on the history of D&D at Stromness Academy can be found here.

NPC “Outhouse is out back” 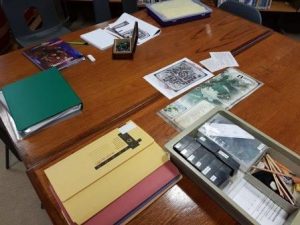 On Tuesday after school a small group of five experienced D&D players meet.  This includes one of the pupil DMs so it gives him a chance to play as well.  Currently we are playing the Curse of Strahd campaign set in Ravenloft.  This adventure will be full of suspense, a little measure of horror and maybe even some hope.  The characters find themselves transported through mists to a different place to where they were the night before.  They are in a forest clearing near a road.  They have two options: go east into the mist (back to where they think they came from) or go west.  They find out that the mist is rather dangerous so go west along the forest track.

Player: “How would I know I am in a forest?”

DM: “Erm!” Looks at other players.

The characters find their way to the village of Barovia where two little children ask them to chase a monster out of their house.  The players are now currently ‘stuck’ in The Death House (no it isn’t really as bad as it sounds – actually, yes it is!) which is an introductory adventure getting them used to the emphasis on the role-playing aspect of this campaign, as opposed to the dice rolling of lots of combat.  It is making the players think much more carefully about their character’s actions, how they work together as a group and how they affect the other characters in the group. For example, maybe hitting a group of statuettes with a maul, which you saw briefly in the guise of your adventuring companions, might have consequences! One of the party took a lot of damage!

The main thing with D&D is that the players have fun.  The great thing is it also teaches pupils lots of skills in terms of numeracy, literacy and social skills.  More information is found on the D&D page of this blog.