We recently had a group of 32 pupils on a trip to London with the Performing Arts department. the pupils had a fantastic time seeing the sights of London and, despite their scheduled show being cancelled, managed to see Wicked! There is absolutely no truth in the rumour that Mr McHugh fell asleep during said show! 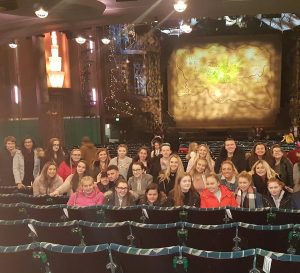 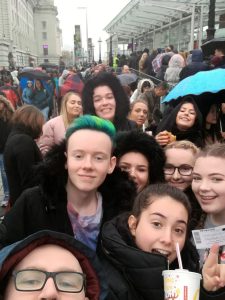 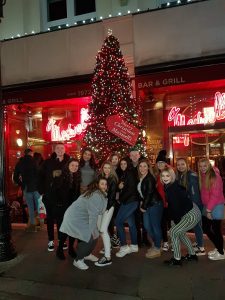 On the 17th November the football teams in the school organised a Race night to raise funds – the costs of referees, hiring pitches and transport certainly mounts up! Thanks to all those who contributed and went along on the night over £2000 was raised. We are so grateful to everyone involved and assure you that the money will be well used supporting our teams.

The first of our Parents’ evenings took place with S1. We had a great turnout and the feedback we got from parents was very positive. Thanks to parents and carers who came along and to those who helped organise the Evening, including our S3 pupils who turned up to sell their goods as part of the Micro Tyco initiative. Micro-Tyco is a month long challenge that enables participants to practice and learn fundamental business principles in a safe, ‘micro’ environment. Teams from schools, universities or businesses have one month to turn £1 seed capital into as much money as possible. The pupils will be having a Micro Tyco trade fayre next week to sell their goods. 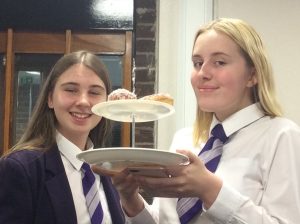 Thanks also to our S6 helpers at the parents’ evening who went round the school with iPads and tried to make sure nobody left the building without completing an evaluation!

In the Social Subjects department invitations were sent out to MSPs to speak with the Higher Politics class. So far they have been visited by Colin Fox (Scottish Socialist Party Leader), Richard Leonard MSP (Labour, and now leader of the Scottish Labour Party) and Monica Lennon MSP (Labour), Graham Simpson MSP (Scottish Conservative). And in the next few weeks they will be visited by Clare Adamson MSP (SNP).  The pupils have thoroughly enjoyed the visits and gained a great deal from the discussions. 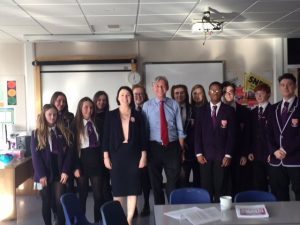 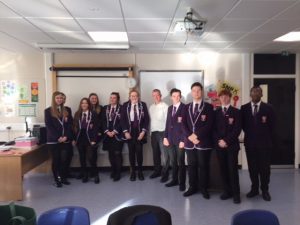 Anti-bullying week took place and we were lucky enough to have Base Youth in Motherwell to talk to our S1-3 year groups. The talks were great and, as always,  the pupils participated well. 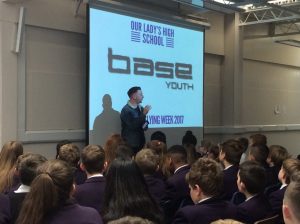 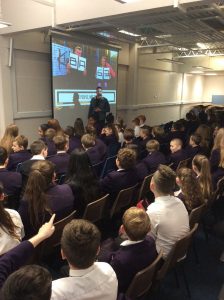 You will know that there is a consultation taking place about school transport in North Lanarkshire at present. The proposed changes will have an impact on a large number of pupils presently transported to Our Lady’s. This is a consultation process and so I would encourage you all to have your say by following the correct procedures. The link to the documentation and how to respond is: 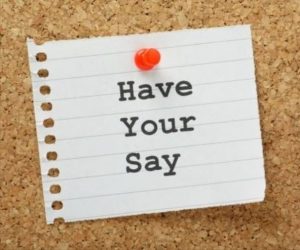 We have a school Fayre taking place on Saturday 9th December and have a number of stalls in place for this with our S6 Caritas pupils playing a big part in organising the event. It takes place from 10am – 1.30pm in the school. Get the date in the diary and come along and get some of that Christmas shopping done! 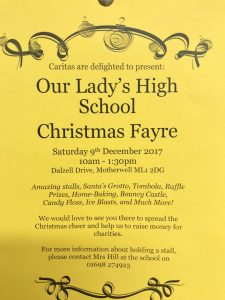 School continues to be very busy with lots happening.  We recently had our Day of the Dead celebrations with our S2 pupils that was really successful and enjoyable.  Thanks have to go to the Modern Languages, RE and Art departments for the hard work they put in preparing for this and running the event. 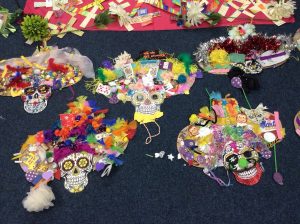 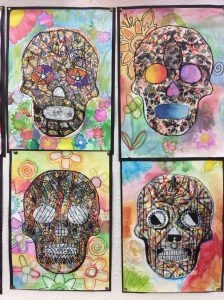 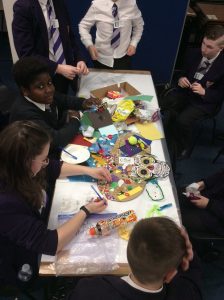 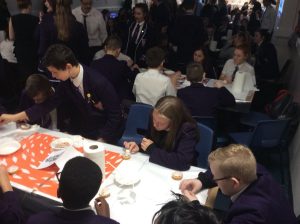 This week was Dyslexia Awareness week and as part of this there were various events organised for the staff including a coffee morning and ‘wear blue’ day. There was a colouring competition available for S1/2 pupils throughout the week during lunchtime and there will be further awareness raising of dyslexia in PSHE classes.

We continue to try and ensure staffing is settled in the school.  This week we appointed a DHT to replace Mrs Donnachie who left in the summer.  Mr Derek Lang was successful and we look forward to welcoming him to the school.  My thanks go to the members of the Parent Council who helped out at the interviews for this. As many of you will be aware there has been a shortage in staff in some areas so we are glad to be welcoming a full time Biology teacher to the school soon and thank the council for their support in helping us to fill this gap.

Since the start of the month we have been praying for our departed family friends and have a book at the front of the school with the names entered by staff and pupils. This is also the time of the year when we remember those who have lost their lives in war. The annual War Memorial Mass will be taking place on Friday 24th November this year where former pupils of the school killed in war will be remembered. 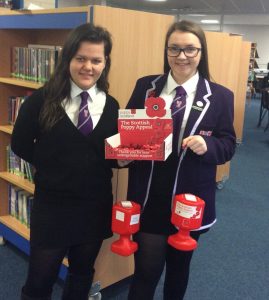 Our annual Christmas Fayre takes place on Saturday 9th December.  Mrs Hill is working hard with our S6 Caritas pupils in organising this.  It would be great to see a good turnout at this event – bring your friends and family!

S6 continued with their fundraising this week with their ‘Soak an S6 pupil’ event.  They were shivering by the end of it and I have to say there were a number of pupils that took great pleasure in either throwing wet sponges or buckets of water at them – particularly their siblings! 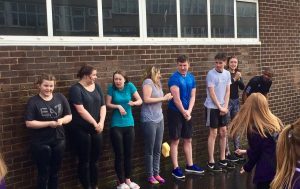 So often we have pupils out at events/trips and always represent the school so well. Recently Julia and Eirinn took part in the Scullion Debate making a great effort.  We had pupils at a Chess competition beating Mearns Castle 4 – 1. A group of pupils represented the school at the Kids Lit Quiz.  And recently a group of Higher Geography pupils went on a field trip in Glasgow.  This is just an example of some of the great things that pupils have the opportunity to get involved in. 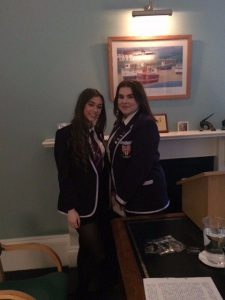 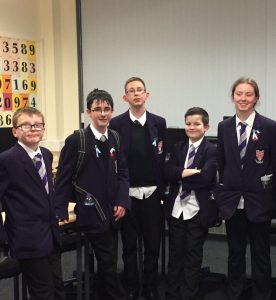 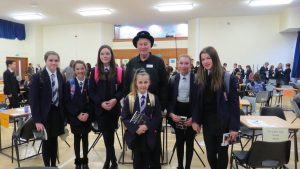 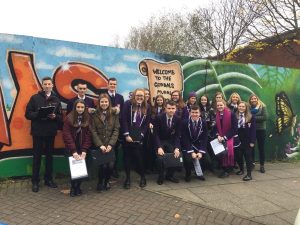 Not only do we have teams that represent the school but also a number of clubs that happen throughout the week that pupils are made aware of this through the daily bulletin.  I would encourage all of our pupils to get involved in something outwith the class.

The school also had the pleasure recently of welcoming the scriptwriter Marc Pye to the school to spend an afternoon with our Advanced Higher English class. 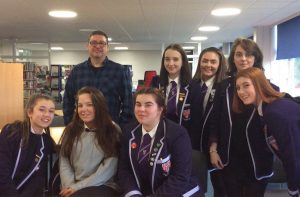 Staff have also been very busy in the school and many have been getting involved in working  groups, for example, the Discipline group, Mental Health group, Political Literacy group, etc…  All of these groups are looking at areas that we can work on and develop within the school.

As part of the process in identifying what we can improve, I have emailed all parents with a link to a questionnaire about the school.  Thank you to so many of you who have already responded to this.  The questionnaire will be open until the end of the month and I would encourage you to have your say.

We have now registered to make the steps to getting the Rights Respecting Schools Award. The Rights Respecting School Award (RRSA) is an initiative run by UNICEF UK, which encourages schools to place the UN Convention on the Rights of the Child (CRC) at the heart of its ethos and curriculum.  Part of this process will involve working with staff, pupils and parents over the coming months and raising awareness of the UN Convention.

S4 pupils had a great opportunity to enjoy a week’s work experience either the week before or the week after the October break . This gave them an insight into the world of work and what was involved in particular jobs/careers.  We are always keen to expand the partnerships that we have with businesses, not only for work experience but also for help with CVs, mock interviews, careers fairs, etc.  If you are able to help out in any way please contact me at the school to discuss further.

The S6 pupils organised a No Uniform on the Friday before the October break as part of their charity fundraising for the year. Pupils and staff then enjoyed a well deserved break and came back refreshed and ready for the run up to, dare I say it, Christmas!

Before and after the break all the pupils had their photographs taken. W are just waiting for these to come back with clear instructions on how to go about ordering those lovely photos that will adorn mantelpieces and walls for years to come!

S1 had a great time with their sponsored slideathon recently, raising money for Lepra. 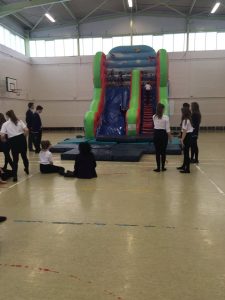 Over the last few weeks Mr McQuillan and I have had the pleasure of visiting the Primary Schools for Information Evening for Primary 7 parents. The evening let them know about the great transition programme that is in place in the school to help alleviate any anxieties pupils may have as they prepare to move to high school. Part of that programme involved a day visit recently for all the P7 pupils with a timetable in place for them for the day – all the feedback was very positive and pupils are already looking forward to starting next August.

We have a number of pupils undertaking the Pope Benedict XVI Caritas award this year and it was great to have most of them join other pupils from across the diocese at the Commissioning Service in the Cathedral with Bishop Toal. Pupils will be involved in volunteering in school and in local Churches throughout the year. 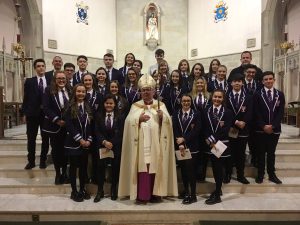 S6 pupils organised our S1/6 Halloween Disco (photo) and what a great event this was! Pupils were looking great in their costumes, got involved in games and the pizza went down a treat as well! Well done to the S6 organisers! 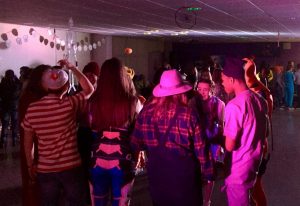 We were delighted to have Fr Martin on hand on the Feast of All Saints this year to celebrate two Masses for us.  The pupils were very reverent throughout and were an absolute credit to their families.

Don’t forget to follow us on Twitter (@OLHSMotherwell) as well as the departmental accounts.  As inclement weather approaches this will be one of the first ways that we will try and communicate with you if there are any issues.