On Thursday 29th of March was P4/5’s Easter Assembly. Everyone had a role and they all did well with their roles. All the parents helped paint and craft other props like hats, poppies and backdrops. Children in our class were put into pairs and given a propaganda poster to recreate by hand drawing it. We all had fun preparing for the assembly and we all had fun doing the assembly. When we were doing our propaganda posters  people took almost 4 different days  to finish their propaganda posters and most of them looked brilliant. When our giant poppies were all made we researched soldiers that  we found information about them and wrote it down. Then Miss Brown had put it down on the giant poppies because Miss Brown had laid them down on stage so at the end one by one we would go pick up a poppy and read out what it said to the audience.We had much fun doing and practising the assembly and we are doing it again this year for others that had not seen it. People found it very emotional hearing about the people from Islay that had died. 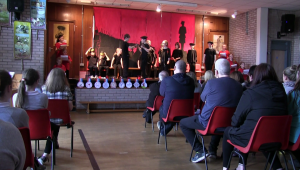