Endeavour is a long term project that you get to choose what we do and we have to complete a project and I done comics for my endeavour I found it hard because I was not the best at drawing but now I would say I am decent at drawing now that I have been practising.

I found thinking of the comics hard because I couldn’t think imaginatively easily and now that I think about it it seems easy now when I don’t think about it and I also I found drawing the comics hard because I was not that good at drawing but now I am quite good at it now. I think this was quite out of my comfort zone. I also learned how to use a photo copier. Mrs Clark helped me by letting me use an online comic generator

On Wednesday 1st June our school invited Port Charlotte and Bowmore Primary School to come do Orienteering with us. We all went to the hall were we got sorted into four different groups blue, purple, orange and green. We were all mixed up so there was some Port Ellen Pupils, Bowmore Pupils and Port Charlotte Pupils in each group. After that each group was sent with a teacher. Every teacher had their own orienteering stage. We also had Lynn Walker from Scottish Orienteering to hep  us and we also had Rona Young, a P.E teacher that helped us. The courses we had were Make your own course, How to use a map / tour around our playground, a maze and a course with different stages. Everyone had lots of fun.

Then today everyone was split into their Port Ellen school houses (Nave,Texa and Orsay) and then we were split again into teams of 3,4 or 5 and we were each given a map and an electronic dibber (which we also used in the maze). One person in each team would go to one of the tags located on the map, log it using the electronic dibber, and then when they came back to the team they would pass the map and dibber to the next runner.   They had to do odd and even numbers in turn and the big ones helped the wee ones to find the points.  At the end we all gathered in the hall and we were told which house won the competition. Texa was third, Orsay was second and Nave was first. Everyone had lots of fun and everyone gave it their best shot.

We had a fantastic afternoon on Wednesday 11th May, World Orienteering Day.  There were courses available at all levels, from picture courses for nursery children, adding up sums courses for infants right up to tricky courses for our P5-7 orienteering experts. It was great to have such a good turn out of parents, who were very game taking part. Parents also had an opportunity to try out our i-orienteering course using our new ipads and it gave them a taster of what we hope to develop further around the village.

The Orienteering club are trying out lots of different variations on orienteering themes – the latest was orienteering bingo.  The ten markers had different, random numbers on them and the children had bingo cards instead of the standard scoring cards, only punching their card if they had a number that matched the number on the marker.  Luck and skill combined.  Some of the runners were getting frustrated climbing to the top of the hill to find out that the number didn’t match.  Bronagh was still the champ with a grand total score of 27!!

Through the holiday I managed to achieve 2 walks up to Lagavulin with my mum and my dog both times , we didn’t meet anyone and 2 trips to the Singing Sands. The first time I went to the Singing Sands it was just me, my mum and my dog but the second time I went it was me, my mum, Emily, Eva, Charlet-Rose, Patricia, Eva’s Auntie Katie and Chloe. Eva’s mum and auntie brought their dogs as well and luckily there were no goats to chase!

I also managed to find a website called “plot a route.’’ It is where lots of people share different places to walk, cycle, run and many more activities. Its a great website:)

On Monday afternoons after school ends Mrs Harrison takes orienteering club from 3:30pm to 4:30pm. It is for classes 4-7 it is a great way for the children to get fit and more healthy. We either do 3 courses or 1 course.  At the last club we did 3 courses, 2 timed ones and one just for fun.

The timed course had 3 different levels, Bronze, Silver and Gold. There were 10 numbers in all the courses you had to get as many numbers done in the fastest time you could. There was a tie for 1st place between Ruaraidh Macdonald and Bronagh Newman. In orienteering club we start 20 seconds after the  person in front so when you finish you take off your starting time. Today is the last orienteering class before the holiday.

We have all enjoyed it!

I am also planning on making a little collage of photos on the laptop and will add some information of the places I have been.

So far my favourite place has been Ardnave because there is a beautiful lake, lots of sheep and when I was there what two beautiful swans were gliding across the lake.

We had to obey the countryside code and close all gates which you MUST keep shut unless you want chasing after you!!

We now have an after-school orienteering club.  We started off doing some work on orienteering symbols and indoor courses before moving outside.

Here are P3/4 just kitted out in the newly arrived waterproof gear.  Of course they had to go outside to test it! The maps got a bit soggy!

Hi my name is Natalie and I am doing an Endeavour project, and I thought I would share it with the world. Endeavour is an independent project where you choose your own project and learn about it for eight months and in June we have a big fair and share our learning with friends and family. For my Endeavour I chose “Walks Around Islay.” I chose this project because there are ALOT of places on Islay I have never been, and I would like to find out some information/ history about Islay. So every so often I will share some information and history about place I have been on Islay.

The people that are able to help me are my family,  Walk Islay and mainly people that would like to go for a walk or another place that they have been before or a new place.

I planed my project with my mum and we had a wee chat about something she would be able to help me with and we could go places together in the holidays.

At the end of my project I will have an Explorers Book, A Collage of photos and maybe a book of information.

As part of our orienteering training we made an amazing maze in the hall – we think the children will enjoy orienteering their way through this as much as we did!

Lynn Walker from the Scottish Orienteering Association visited Port Ellen on the in-service day in Novemeber to train teachers how to teach orienteering.  Everyone enjoyed the workshop – it was a lot of fun…..despite the rain!

We think orienteering is fun because you can get to increase your fitness and stamina which can make you more healthy. It can also help you improve your teamwork with others which will get you more involved in other activities.

Port Ellen Primary School P5/6/7 has been learning how to Orienteer. To sum up what they have achieved is quite remarkable.What they have been doing in oreeinteering this year such as making some course challenges, made a map of the school grounds, Google Maps course around Port Ellen, and they made a course round Islay on a map and put QR codes round the school .

The School got a grant of 2,000 so the school thought it would be a good idea to buy water proofs and other outdoor achievement for orienteering and other outside activates with the school. They have recently done a Google Maps course round Port Ellen with videos and pod casts.

I know they have been very successful in there orienteering topic and we hope they can continue this topic.

If you are at this checkpoint you will be able to see the ferry, the Port Ellen Lighthouse and the lookout hut.  The pontoons are for people to keep their boats at when visiting Port Ellen.  There is an information board showing where the free spaces are for mooring your boat.  One of the things we like to do at the pontoons is crabbing.  Here is a video explaining how to do it.

When we were creating our own map, guess what happened?! A GOOGLE MAPS VAN WENT PAST!!!!!! It was such a coincidence! How did it know?!

The bearing of a point is the angle measured from the north line. Bearings help you find your destination so if you are new town bearings can help you around the place.

This diagram shows compass points and the bearings plus the angles of a compass.  You can see the bearing of A from B is 065° and from B from A is 245°.

This is a triangle that is labelled a to b b to c and c to a. 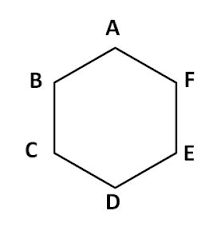 This is a hexagon labelled a b c d e f: A to B =south west

By Ruaraidh and Rowan at Port Ellen Primary School 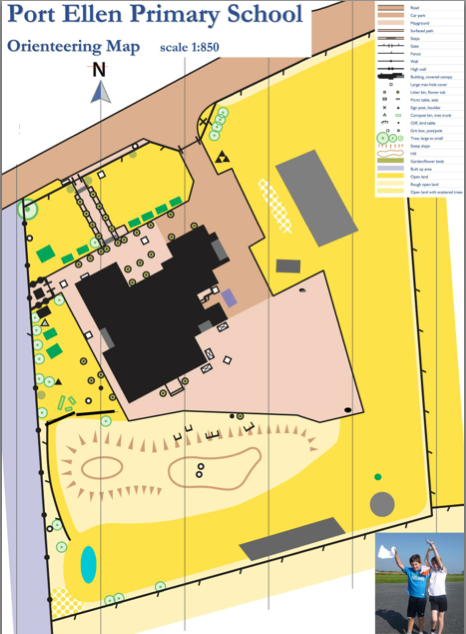 mile from somewhere on the path and back. Our class found out that it stopped at a wee bay right beside a stone wall. We thought if we go around the school a lot of times we could measure the school and see how many time it would take to do a mile. For the run we had to time each other to see if we improve each week. For the run we had to run around the edges 4 times. We know that running around the school 4 times because we measured it on the app called Map My Walk.