The kids that go to Port Ellen JRS FC  get to go to  different places in Argyll and Bute to play against a lot of other great teams over Argyll and Bute football teams. There is 7 teams that we are playing against. We are playing 7 home games and 7 away games but this time we played Lochgilphead Red stars F.C.

We had Calum in goals, William, James and Ben in defence, Teddy, Murry, Katie and Dylan were in wing, Mya and Finlay were in Midfield and Jack was our striker.  We won 2-0.  It was great fun! 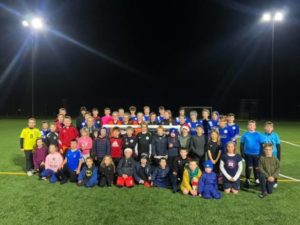