Every year Port Ellen Primary has a sports day in which every member of the school including the nursery gets a chance to compete in the races and win points for their houses. P6/7 all got a chance to win sports championships. Sports championships is a series of activities in which you can get first, second or third and if you do not get placed you get 25 points. The winners of sports championships for the girls were, in third place Harmoni Edwards, in second place was Charlet Rose and in joint first was Holly  and Freya. For the boys it was Donald Swanson in third place, Jack Shaw in second and in first place was Aaron. At sports day the three houses( Orsay, Texa  and Nave) made their relay teams, Orsay’s relay team was Holly, Aaron, Dearbhla and Charlet, Texa’s was Freya, Jack, Donald and Ciaran. 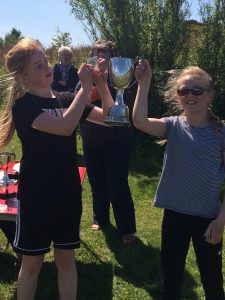