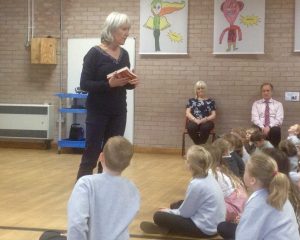 Yesterday Nicola Davies came in to talk with us about her books as part of the Scottish Book Trust 20th Anniversary Tour.  She has mostly based her stories with animals in them because before she was an author she was a zoologist and there was a book that she was telling us about and it was about a boy that got his arm pulled of  by a lion, it’s name was The Lion Who Stole My Arm. The  real story that it was based on was about a 5 year old boy who got attacked by a lion and even though his arm didn’t come off he had to get it amputated because the attack was so bad. She was also telling us about animals that she was looking at such as: lionesses, humpback whales etc. When she was talking to us about the humpback whales she noticed when she was studying them that mostly every day and hour of the day the whales would eat then eat then eat again. Also to have a little fun we learned how to sing like a whale.  Nicola Davies also wrote a climate change book called Gaiya and because we are doing climate change as one of out topics that was very interesting. We also wrote climate change poems. We have been researching a lot of different facts and effects that climate change has on the world. We could either write a kenning, a haiku or a free verse poem.  We thought that the visit as very exciting learning about lots of different animals.