Below is a news article, written by the children, that tells the story of the Tuscania as though they were on Islay a hundred years ago: 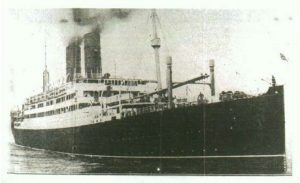 On the 5th February a tragedy happened, the SS Tuscania, a US troopship that was carrying more than 2,000 American soldiers, was torpedoed 7 miles off the South East coast of the Isle of Islay. The SS Tuscania was going to Liverpool from New York City and was part of a convoy of 14 vessels. It was a tragic night with conditions like no other, the rough seas and darkness in the sky made it impossible to see. Sadly the SS Tuscania was torpedoed twice by a U- boat at 6:40pm; the first torpedo missed the SS Tuscania but sadly the second one hit it. It left a huge v shaped hole in the troop ship and destroyed many of the lifeboats. The torpedo hit the middle of the boat on the starboard side. The SS Tuscania sank at around 10pm. After having fired the torpedoes the submarine immediately dived to escape as escort vessels came to attack. Some of the men managed to get onto the lifeboats, left and got to safety, but others fell overboard due to rapid waves and rough seas. Luckily Three British destroyers; Grasshopper, Mosquito, and Pigeon came to help others, putting their own lives at risk to come alongside the Tuscania and as safely as they could transfer the men for one ship to another by rope whilst still being fired upon by the U-boat. The destroyers saved 1,500 men

As the lifeboats were approaching the coast of Islay in the dark, the men aboard the lifeboats would have heard the sounds of the crashing waves. An Islay man, Duncan MacDonald, is reported to have been on one of the lifeboats and he persuaded the other men on the lifeboats to wait until morning before they carried on. When it was light they then made their way safely into Port Ellen. Another 50 men sadly died when they were attempting to make their way in the dark and their lifeboats crashed on the rocks. One boat landed near Upper Killeyan and the survivors started to make their way to the Morrison’s family home. Robert set off to see what he could do to help, while his sisters Betsy and Annie had begun baking scones for them. One of the survivors was Arthur Siplon, who said ‘Men were in good spirits despite tragedy occurring all around them.’

Other people helped save them on the island, but many just collected the bodies of the dead. Luckily 132 men made it safely to Islay but sadly a lot of them were badly injured.

One of the survivors Everett Harpham wrote a letter to a friend in America saying that they nearly drowned and when it was light enough to see there was some bodies lying near them dead and they had to listen to the groans of the dying comrades until a Highlander rescued them. Arthur Siplon had been knocked off a lifeboat by a wave and managed to get back on and he was trying to help his friend Wilbur Clark up, when a big wave hit the boat again and they were both thrown against a rock and Wilbur Clark hit his head and sadly died.

Loads of people were found dead around the island in places like Lochindaal, Kilnaughton and Bowmore. There were 53 bodies buried in Port Charlotte, 83 were buried in Port Ellen and 46 bodies at Port- nan- Gallan. It is estimated that 182 lives were lost. There was a funeral at Port-nan-Gallan where 28 bodies were buried by Captain Ramsey and then on the 11th 18 more bodies were buried. Port Charlotte also had a funeral and over 400 people attended even in the rain.

We are all sorry for everyone’s loss and if anyone finds a body please contact the police.

By Sarah, Rebecca and Lauren P7 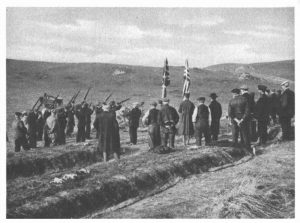