Hydro power makes electricity by water being released from a reservior flowing through a turbine,spinning it, which in turn activates a generator to make electricity. Hydro power is a renewable energy source. 18% of the UK uses hydro power. It’s negative point is that  it is expensive to build and it dams water flooding lots of land.   However it won’t pollute the air with greenhouse gases like power plants that burn fossil fules.  We have small scale hydro electric projects on Islay that make electricity for a house.  There is also a large scale project near Oban, called Cruachan Hydro Plant.  Islay has used water since olden days to move things as this old abandoned waterwheel shows. 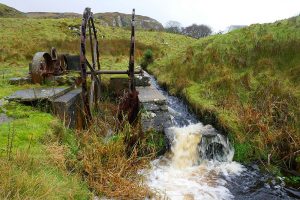