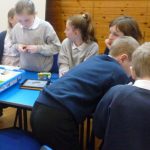 On Wednesday the 15th of March P6/7 all over the island went to the high school to do STEM and there were different activities to do.One of the activities was Lego Wedo. What is Lego Wedo? Well Lego Wedo is when you get to make your own robot. There were three different choices and the one I did was like a bumblebee with  a long neck. There were other ones to do as well. To build the robot you had to go on an app on the iPad and you chose the robot that you chose of the sheet and then tap on to it and it will come up with the instructions  to build your robot.

I think that the one I chose to build was the easiest to make because it was small and it had the least steps and it was not that hard to make.  I felt happy when I had made the robot because I got to build another robot like that but not the same and it was harder.