However, what was now to be done with all of the books that were no longer needed?

It made little sense to dump them all for recycling (plus this would break any librarian’s heart).  So after some research online, Mrs Scott discovered Books Abroad.

Books Abroad is a Scottish charity which recycles non-fiction books by transporting them to developing countries in Eastern Europe and Africa.  Once the books reach their destination they are used by young people in schools and other institutions, with the hope that by empowering them with the ability to read and write they have the means of a sustainable escape route from the plight of poverty.

Mrs Scott, with the help of two S6 volunteers and a very kind Additional Support Needs Assistant, boxed up the mountain of books, and then in late September 2016, the books were dropped off at the Books Abroad Glasgow depot. 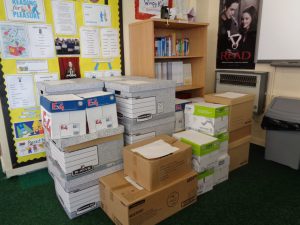 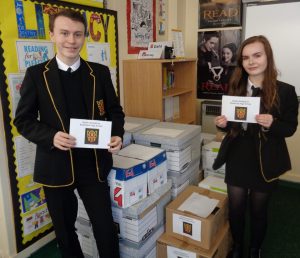