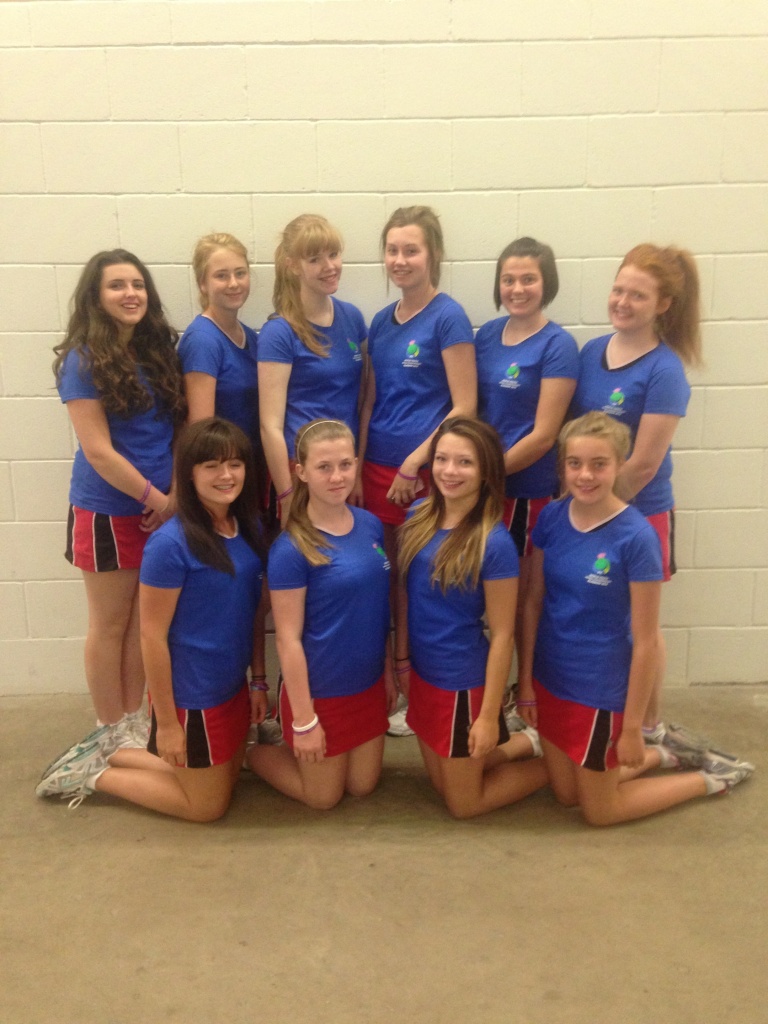 The opening ceremony was full of cultural entertainment including traditional Scottish dancing and music which welcomed the spectators and the other many countries from around the globe. Girls from Braidhurst witnessed the spectacular opening match between the hosts of the games, Scotland against the Cayman Islands. The match offered an insight of the international standard of netball and proved to be inspirational to the girls. The game was fast and exciting and the Scottish Thistles made a strong start to the game and were able to secure the first win of the tournament. The final score stood at 73-23 and proved encouraging and promising for days to come. Overall, the opening ceremony was an inspiring experience for the team.

The S4 team members were privileged to be invited to be a part of Ball Patrol. Their job was to retrieve the ball when it went out of play. This was a very important job, as every second counted in the matches. It was a very valuable experience and a great opportunity for the girls to get a close up view of different techniques and valuable skills to take on board. The team executed this task well and are appreciative for this experience.

The whole Braidhurst netball team thoroughly enjoyed the experience and were very proud to be a part of the World Youth Netball Championships.

By Gillian Scott and Rebecca Murray

With the first game of the school year arriving and so many boys wanting to play for the school, the pupils selected to play in the first game knew this was their chance to shine on the pitch and off it.  The weather conditions were not conducive to flowing football but the Braidy boys were keen to get started and attempt to stamp their mark on the game early doors.  From KO Braidhurst dominated the possession and make inroads into the St Margaret’s defence but the ball in the final 3rd just wasn’t quite up to scratch to give the forwards a chance to score.  The first half was a very controlled performance from the Braidhurst team as they stroked the ball around the pitch to try to find a space to attack.  St Margaret’s continually had an answer and often tried to catch Braidhurst on the counter attack, calm defending from the back four and GK ensured that St Margaret’s were unable to score.  As the half time whistle approached the first round of substitutes were made.  Braidhurst continued to dominate possession but knew that St Margaret’s were very capable of building a quick counter attack.

At the beginning of the second half there were numerous changes to the starting 11.  These changes soon made an impact and after good team play by James Miller scored to make it 1-0 Braidhurst.  St Margaret’s were keen to get back in the game and straight from the KO threatened as some of the Braidy boys began to slacken, however they pulled together as a team to ensure that the score remained

Ten minutes later Kyle Cunningham popped up to score and increase the lead to 2-0.  Braidhurst were very much in the driving position as we approached the end of the game and had started to put more pressure on our opponents.  Kyle Cunningham scored again to add to his previous goal, making the score 3-0 and putting the game out of sight.  Braidhurst were not content with 3 and continued to push for more.  In the 53rd minute, James miller scored again to make it 4-0.  In the last minute of the game, Reece Geddes fancied his chanced from a distance and after a deflection beat the GK to make it 5-0.  Well done to all the boys who played, their behaviour, effort and attitude were a credit to the school both on and off the pitch.

On Thursday afternoon the under 15 boys football team for their Scottish Cup campaign underway with a resounding 11-0 victory over Kilsyth Academy which sees them progress to the next round where much stiffer competition surely awaits.  Playing conditions were never going to be conducive to flowing football; however, at times the standard of play from the Braidhurst boys was exceptional.  Short passing, one touch football along with some mazy runs from wingers Scott Brownlee and Jordan Molina meant the Kilsyth defence were kept on their toes the entire game.  After some inaccurate, long range shooting and excellent stops from the Kilsyth goalkeeper the deadlock was finally broken by a curling effort on the edge of the box from Robbie Watson.  Not long after this Braidhurst got a second through Jordan Molina.  After some good work down the right wing by Scott Brownlee the ball was fizzed in with venom and Jordan was in the right place at the right time.  Goals 3 and 4 following in quick succession, the first of these from Josh Payne with a relatively simple tap-in and goal number 4 the result of some indecisive defending allowing Scott Brownlee to slot in at the near post from close range.  With half time approaching the game was all but over.

The second half saw Mr Gardiner ringing the changesd and giving all his boys a run out as the game was as good as over.  On came Robbie Leighton, for his first game in the colours of Braidhurst, along with Jamie Leslie.  With the Kilsyth heads already firmly down it was only a matter of time before Braidhurst got a fifth and it came shortly after the break with Josh Payne getting a second after a succession of tremendous 1 touch passes down the right hand side.   After/-

After this it was time for the defence to get in on the scoring act with central defender Greg McKenzie getting forward to great and placing one in the bottom left hand corner.  Goals 8, 9 and 10 all came in a two minute blur in which all who were watching struggled to keep up.  This time it was the turn of Robbie Leighton (a goal on debut), a second from the ever impressive Scott Brownlee and Josh Payne to round off his hat trick.  The final goal of the game came from the first goal scorer, Robbie Watson.  The game was wound up early by the home referee as the game had become more like a training session and the light was fading.  This game could prove to be nothing more than a confidence builder for the Braidhurst boys but a win is a win and the second round waits.

PARENTS of pupils in third year recently attended a meeting with teaching staff to be updated on progress in the new National 4 and 5 courses.  At this early stage the pupils are generally coping very well with these new courses.

The Motherwell side took the early initiative, with the excellent Jake Hastie, ably supported by Nicholas Mullen, dominating midfield.   Hastie’s pinpoint through ball to Dylan Falconer allowed the forward to lob the oncoming keeper to open the scoring in the sixth minute.   It was one way traffic after that with Mullen and Hastie both scoring to make the half time score 3-0.

The second half followed a similar pattern with the home side creating chance after chance with three of the seven second half goals arriving in as many minutes.

The boys can now look forward to the defence of their Scottish Cup title facing a tricky tie away to St Modans of Stirling.

The school Astroturf was upgraded over the holiday period and staff and pupils seem absolutely delighted with the new FIFA quality surface. This is being very well used with a range of football groups now established within the school. The recently introduced Elite Performance group of 20 players working with Scottish FA coach Gordon Craig have their sessions from 8.30 until 10 am each day. All other groups of School of Football players receive their sessions from Scottish FA coach Steven Hamilton and Motherwell FC coach Paul Burns.