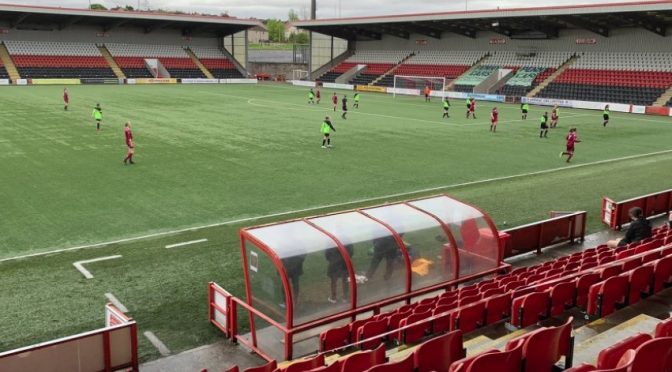 Congratulations to the school’s senior girls’ football team who reached the semi-final of the SFA’s Senior Girls Shield on Friday 21st May. The Braidhurst squad were pitted against St Ninian’s High School in the match which was played at the Penny Cars Stadium in Airdrie. Spectators were unable to watch the match in person due to the ongoing Covid pandemic but were able to tune in via a live stream. Whilst Braidhurst lost the match 2-0 both teams played well and with pride.

The school are delighted to recognise the fantastic achievement of S1 pupil Anna Bondar who is a talented athlete who specialises in the shot put. Not only did Anna recently achieve a personal best in the event she is now the proud title holder of top distance thrown in Scotland in her age category. This is a fantastic achievement and all at the school want to wish her the very best for her future with his event. Well done Anna!

The school’s S1 basketball team recently participated in the final of North Lanarkshire’s Secondary Schools Basketball league which was held on Wednesday 26 February at Cumbernauld Academy.   The boys gave a great effort and came in third place after one victory and two narrow defeats.   Nathan Lawson was named most valuable player of the final.

Congratulations to our S1 and S3/4 netball teams on their victories against Cardinal Newman. Special recognition must go to the S3/4 team as player Ellie Anderson scored a last minute goal which won the match for Braidhurst. S1 Player of the Match: Kiera Richards and S3/4 Players of the Match: Summer Keenan and Ellie Anderson.

On Wednesday 22nd January the girls’ U18 football team were in action against Kilmarnock Academy. The Braidhurst girls won the match 4-1 with Summer Keenan and Amy Boyle scoring two goal each. Congratulations to the girls who now progress to the quarter-final round of the Scottish School’s FA shield. Player of the Match was named as Summer Keenan.

The school’s U14 boys’ football team were recently in action against Calderside Academy in the latest round of the Lanarkshire Cup. The boys came from a goal down to win the match 3-1. Well done boys on your performance and for showing some great team spirit to clinch the win.