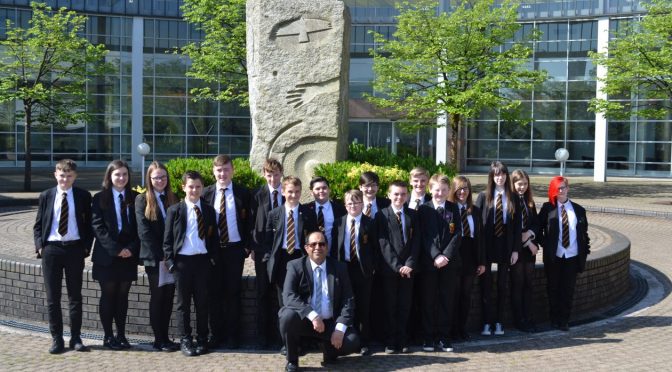 Braidhurst High School robotics club have, by special invitation visited a global leader in technology, namely ,Hewlett Packard Enterprise (HPE), situated in Erskine. The vast 100,000 sq.ft complex is a hub for the company’s refurbishment of IT technology, for example laptops, printers and large servers. Housed within this complex are a number of HPE companies that the club were engaged with.

The visit started with a tour to the 0% waste, IT equipment section run by DXC, then it was on to the high tech world of “app” development by Micro Focus International who are a HPE global enterprise software company.

The host for the day was Mr.Scott McNee who took the club members initially on a tour of the DXC Green engineering, renewal and refurbishment site and then the members were given a workshop by the “app” development team.

After Lunch it was the clubs turn to showcase their award winning robotics team to the directors of the various HPE subsidiaries. After the visit Scott contacted the school to say thank you for bringing such an inspiring group of young people along to HPE.

He commented that in his conversations with the club members, that the visit has had a positive influence on them and broadened their career horizons. Scott’s final remarks in his correspondence were, that Braidhurst High School should be very proud of these young STEM ambassadors. In his opinion it demonstrates what can be achieved when such an enthusiastic team of teachers / influencers give these opportunities to pupils. Scott commented that “They were an absolute credit to both yourselves and the school and it was a pleasure to host you all today”. 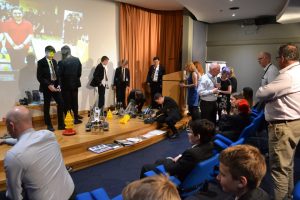 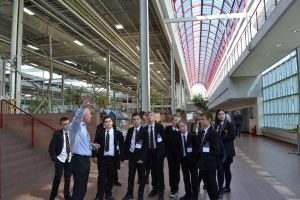