For our TDT today, we were sent away with a choice of lessons we could plan for. Shanice, Katie and I chose to take on an insulation lesson relating to the story of Goldilocks and the Three Bears.

Basically, Goldilocks thinks the temperature of Baby Bear’s porridge is perfect, but she is just too tired to eat it straight away. Goldilocks needs to keep this porridge insulated, but how can she do this? Can your class help Goldilocks so that she can go for a nap?

By providing the children with a range of different materials, they will be able to choose what they think may be the best insulator for porridge and try it out for themselves. We created a potential table for the pupils to record their findings on and teacher instructions.

Although a sheet has been typed, yet left blank for a student graph, we did draw a graph of our own as an example, this could easily be recreated if you felt your class required an extra helping hand with graphs – yours will probably be better if you use a ruler!! 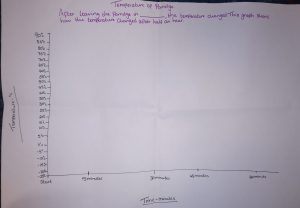 During our maths lecture, we were required to find a book that included maths. Prior to this lecture, I always thought of picture books as being an English resource rather than a maths resource. This really intrigued me and I felt I really had to go looking into this. After finding a few gems of books, this story was my favourite so I thought I would share it, and what you can do with it. 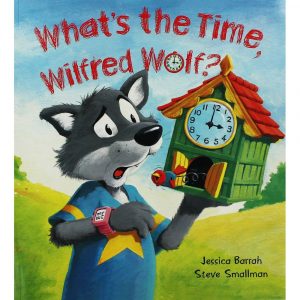 This book starts with Wilfred Wolf (the main character) being unable to tell the time from an analogue clock, which is an issue as he has been invited to a party which starts at 3pm. He goes around some of his friends looking for help but they weren’t any use. On the day of the party, some other friends turned up to ask if he was going as he had just got out of bed and when he told them he could not tell the time, they were able to help him understand an analogue clock.

This book starts by showing how Wilfred Wolf found big hands and little hands too confusing, this allows the children to understand that it is okay to be a bit confused in the beginning as it will soon become easier to understand with some support.

Although Wilfred could not tell the time, he knew when to wake up, eat and go to sleep, you could ask the children if they know what time they wake up, eat or sleep.

By using the idea of a party invite, it provides a context for using time in real life that is relevant for young children.

The story then goes on to show the different types of clocks, this allows children to see how different clocks work and how they help to tell the time.

With the different clocks, you could ask the children what clocks they have at home, if they know anything about these types of clocks.

There is then a page at the end which shows the faces of the clocks with characters acting as the hands as they have drawn the clock face on the ground. With these clock faces, you could ask the children if they can work out what time Lily and Albert are making. 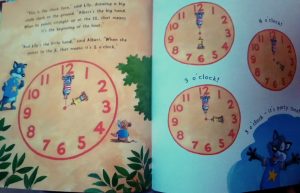 You could also talk about Oscar Owl who is only awake at night, do the children know anyone who works at night? What kind of jobs might people need to do at night?

Playing the game “what’s the time Mr. Wolf” would also lead on nicely from this book as the children will begin to learn the language used when telling the time.

This book is a lovely introduction to a time topic in maths, providing a beginner level understanding of concepts within time and allowing children to understand the importance of time.