Teaching creativity is the highest way to get engagement. Creativity enhances their health and well-being for children to be confident. it empowers them to lead their own learning, pursue their ambition and take control of their lives. Creativity are not separate to the curriculum . Creativity skills are transferable skills for life and work which is supports learning and enhances employability.

Creativity is not just helpful its necessary. Teaching creativity allows educators to build innovative, personalised and flexible learning experiences and be responsible to each needs. Creative learning allows learners to work at the hierarchy of blooms taxonomy, makes learning meaningful and purposeful and gets everyone to engage in ideas that they can be proud of. Makes for curious, open-minded and imaginative problem-solvers who can demonstrate self-efficacy to take control of their lives. Give them the sort of skill set for 21st century so they can shape our future for the better.

Vid 3- Can you learn creative skills?

everyone is born with creativity but unfortunately as we grew we can forget to use these skills. we can learn helplessness rather than problem solving. they’re like muscles – if they are left they can wither but if they are challenged they grew. Research shows that the first step to develop our creative skills is to understand them and recognise them. Simply by recognising them allows us to empower them and use them in new places. We are all creative, we just need to believe it.

Vid 4- How can subjects develop creativity?

Its not the subject that is creative, its the approach. All subjects can be enriched by being delivered creatively. 3 simple tips to achieve this:

1- identify the creative learning opportunities, anything that challenges pupils to invent, explore, experiment and lead all help.

2- get creative, Use creative learning to enrich topic or lesson plan to make it more challenging. Encourage curiosity by asking questions which allows pupils to follow their interest. Teach open-mindedness by challenging expectations and offering multiple perspectives. Engage pupils imaginations by asking ‘what if?’ questions. Develop problem solving skills with open-ended challenges.

3 – Use interdisciplinary learning, working with other subjects challenges pupils open-mindedness and imagination.

Now reflect on the differences between creative teaching in dance and teaching for creativity through dance. Discuss the skills of creativity (and critical thinking) and provide examples of how you would develop these skills through dance with a class of children.

Creative teaching in dance is when the teacher is providing the opportunity for pupils to explore their creativity skills during dance subject. Providing chances for the class to use their imaginations in creating a dance routine for example. Pupils are using their creativity skills to enhance their dancing skills. Whereas, teaching for creativity through dance is using dance as an approach to enhance their creative skills. The main focus of the lesson will the the skills that the class are applying while dancing. Pupils are able to invent, explore, experiment and lead during the creation of dance routines together.

Skills of creativity involve; open-mindedness, problem-solving, curiosity and imagination. One example of how I would develop a classes imagination and problem-solving skills is by teaching the “Magical Monkey” dance. I would firstly explain that each child has a magic wand that can change them into different animals. Then they have to wave their wand then turn into each animal by acting as that animal would act while singing the following:

“I’m a magical monkey, my letters M you see (bend knees and bounce),”

“When I wave my magic stick, I change magically (wave wand),”

“I’m a magical monkey, just watch what I can do (bend knees and bounce),”

“Here’s the trick I wave my stick and I’m a kangaroo! (wave wand),”

“Bouncing up and down, feet way off the ground, bouncing sure is fun, watch me everyone! (bounce like kangaroo).”

A the end of the chorus, another child will choose a different animal for example, turn into a horse and gallop, a bumblebee and fly, a snake and slither. This can be done in pairs, gorups or as a whole class activity.

Scene 1: Cinderella crying on the floor, with the stepmother watching/laughing

Within this scene, Cinderella has been scrubbing the floor under the strict orders of her wicked stepmother. Watching Cinderella scrub the floor makes the stepmother feel superior and dominating. In contrast, Cinderella feels lonely and trapped. The difference in the characters’ feelings are reflected within the levels of both characters in the still image.

In this scene, the prince shows his determination to finding the girl that ran away. He goes to every home to try find the girl whose foot fits the slipper. The ugly stepsisters lie to the prince to pretend that the glass slipper will fit their feet. They are doing so because they think that the prince will fall in love with them, as this shows their arrogance in their own looks and personality.

Scene 3: Cinderella fits into the glass slipper; the prince has found who he is to marry

In this scene, the prince notices Cinderella and wants to try the slipper on her foot. As the slipper fit, the prince is delighted to have found the love of his life and Cinderella is eventually shown through the eyes of others. She no longer has to feel unhappy and lonely, as her true beauty has been revealed and the prince has fallen in love with her for who she is.

Scene 4: Cinderella goes off with the prince and the ugly sisters cry in the background

This final scene shows all the characters true personalities, which highlights the importance of how you are perceived by others rather than your own thoughts. The stepmother and stepsisters are upset as they can no longer force Cinderella to work for them and treat her as if she is nothing. Furthermore, Cinderella is finally happy as she has been relieved from her wicked step-family. As well as the prince who is delighted to have found the love of his life. 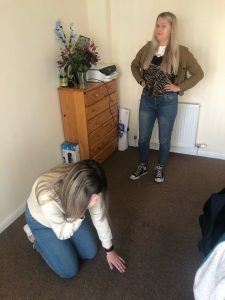 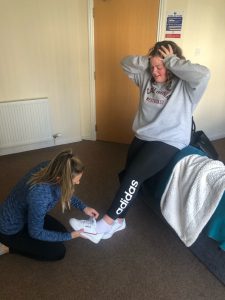 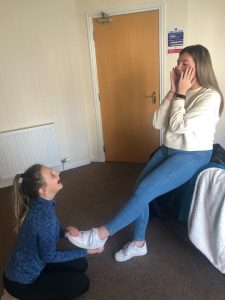 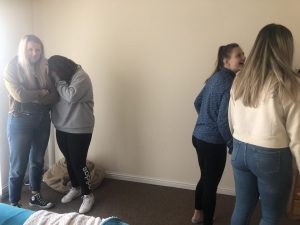 Primary colours are basic colours that can be mixed together to produce other colours. They are usually considered to be red, yellow, blue, and sometimes green.

A secondary colour is a colour made by mixing of two primary colours. For example, red and blue create purple.

Hue is more specifically described by the dominant wavelength and is the first item we refer to (i.e. “yellow”) when adding in the three components of a colour. Hue is also a term which describes a dimension of colour we readily experience when we look at colour, or its purest form; it essentially refers to a colour having full saturation.

Hue is essentially the pure colour without tint or shade.

Brightness is the relative lightness or darkness of a particular colour, from black (no brightness) to white (full brightness). Brightness is also called Lightness in some contexts.

Colour temperature is another vital consideration in design—by distinguishing between warm, cool, and neutral colours, we apparently have the power to evoke emotional responses in people. Warm colours are those with shades of yellow and red; cool colours have a blue, green, or purple tint; neutral colours include brown, grey, black, and white. (The Interaction Design Foundation, undated).

Colour is known as one of the most expressive elements because it immediately affects our emotions. Using a variety of colour allows spectators to gain more of the thoughts and feeling that are happening in a piece of artwork. For example, the use of dark colours or bluey colours highlights more of a sad or scary emotion compared to a piece of artwork using lots of bright colours such as yellow to demonstrate happy emotions. The use of temperature, brightness and saturation of the colour allows us to evoke these emotions in people.

Colour theory is used to describe the collection of rules and guidelines concerning the use of colour. Colour theory informs colour schemes, aiming to aesthetically appeal and effectively communication the message of the art piece on a visual and psychological level.

Scientific properties of colour and light

Isaac Newton, in 1660s, discovered that clear white light was composed of seven visible colours (the colours we see in the rainbow). Newton lead the path for others to experiment with colour in a scientific matter (Smithsonain Libraries, undated).

Within the visible light of the electromagnetic spectrum are still more wavelengths. Each wavelength is perceived by our eyes as a different colour. The shorter wavelengths of visible light are violet — we might call them purple. Then as the wavelengths get longer and longer, the visible light changes in colour to blue, green, yellow, orange, and finally the longest, which is red. Most light that we use — like sunlight or light from a light bulb — is actually a mixture of all of the visible light wavelengths. It is called white light. When it is mixed, it is difficult for us to separate the colours out. We just see it as useful light. But at certain times the light does get separated out. 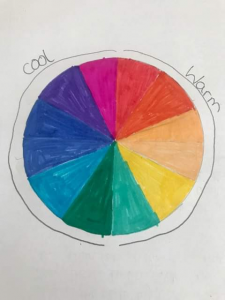 Blue is a cool colour which is commonly known to represent the sea and sky. Blue is one of the three primary colours which can be mixed with red to produce purple or mixed with yellow to create green. The colour blue can often represent sad and unhappy emotions. In India, the colour is associated with mourning, emphasising the sad emotions. 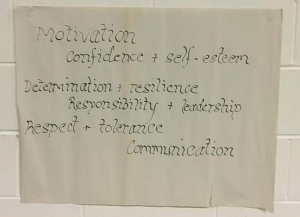 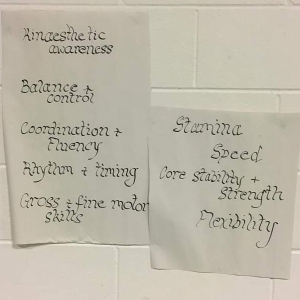 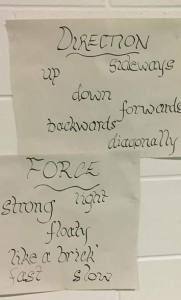 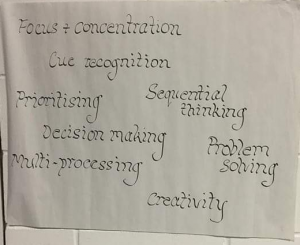 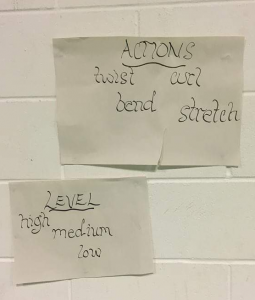 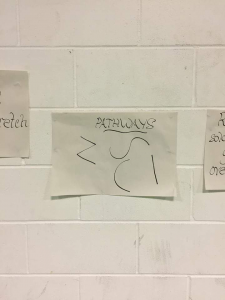 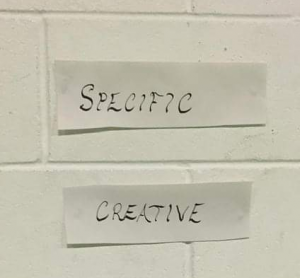 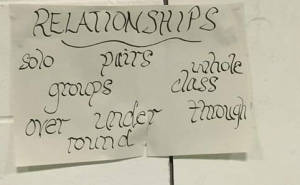 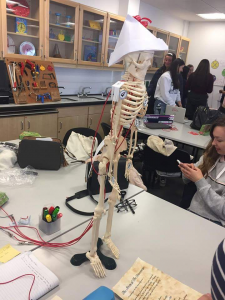 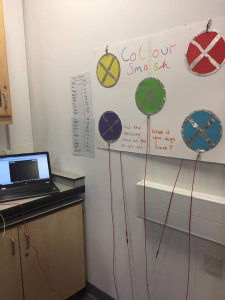 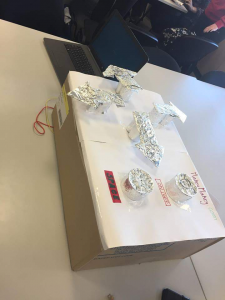 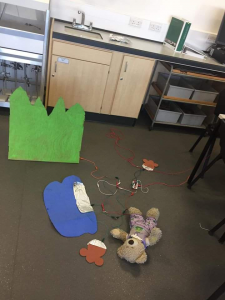 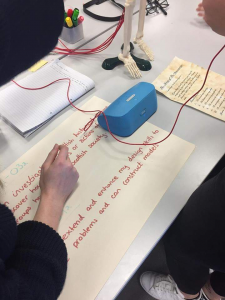 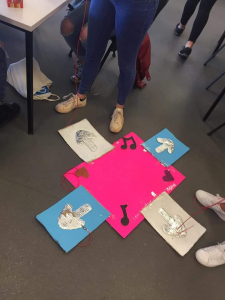 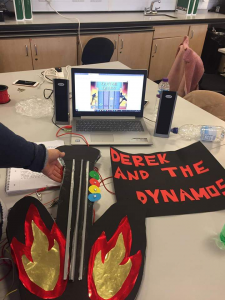 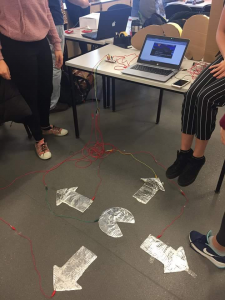 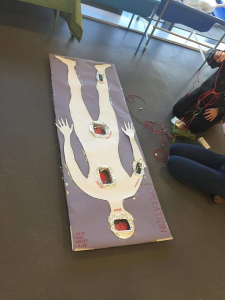 Today, we had nursery children in to play. We had a construction station. We built up a context of lost zoo animals which the pupils must find and build a home for. The context was very engaging for children and they all enjoyed building pens for the animals. 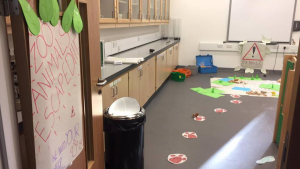 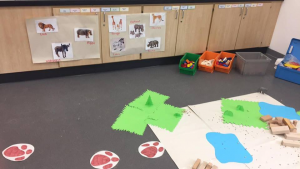 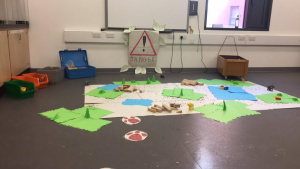 Evaluations of the lesson: 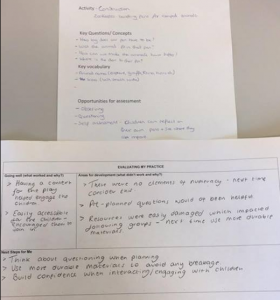