I came across this video on facebook and found it really inspiring to keep in my blog.

One thing i am fearful for working in a school is dealing with the problem of bullying. I find it very upsetting seeing a child getting hurt and lacking confidence due to someone else’s verbal comments. After viewing this video, it is definitely a method I will consider while helping to stop bullying. It is important to show children how to try overcome nasty comments and keep their self confidence within them-self. I think this is a great message to pass on to children to take away power from a bully.

I have always been interested in the topics of Racism as I struggle to believe the cruelty that once went on in the 18th, early 19th century, especially in America. I studied the African Americans stories of segregation and discrimination for my higher history exam, so I knew quite a bit about the racism that went on. However, in our lecture this week, it wasn’t just the racism that went on, but also highlighted that racism is still going on. As naïve as it sounds, this was 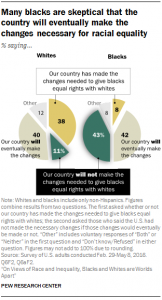 something I hadn’t really thought of before. I guess, I could blame it on being blind towards reality or simply the lack of media highlighting the issue. I was taken back for a moment when I read the statistics (shown on the right) of how Blacks actually feel about equality today. Other statistics were raised how a greater percentage of blacks get in trouble with the police than white and are more likely to be accused of being in possession of a weapon. It’s wrong that people assume that black people are violent just because that’s what history says. People can be so easily brainwashed by other prejudice views.

I was intrigued by the lecture which leads me to do the required reading and watch the videos on racism. I found Clint Smiths video fascinating, the story he tells is about his children; growing up black in America. I thought it was brilliant as I always hear the stories of the children and adults that got into trouble but hadn’t considered the fear that EVERY child would be feeling. Although the children are unaware of the discrimination around them, their parents have to stress about teaching them the rights and wrongs of being a black person; you couldn’t simply follow what a white person does! While the parents have to keep their children safe they also have the struggle of keeping their childhood alive.

A few days later after reading up on recrimination and prejudice against Black people, I came across a story which took a different perspective of racism and patriarchy. it explains how a White Male has lost his job due to the company needing to hiring a black and a female employee in order to promote diversity.

This story is a difficult one as you can see that people are working on erasing racism and patriarchy in the workplace, however, is it still right that people lose their jobs over their gender and colour of their skin? I believe that it shouldn’t be stressed that you have to have a black person or a woman in the working place just so you aren’t seen as racist or feminist. We should be promoting more of giving everyone the equal opportunity to succeed but decision should be made purely on their talent, not gender or race.