In our values module workshop on Tuesday, I felt a great change of perspective. I was unaware what the true lesson was throughout the workshop and as the secret was revealed, it really set an impression on me.

As we were split into 4 groups of roughly 9 students, I was in group 2 and was prepared for a usual group task. We were given an envelope with different materials and were instructed to plan a helpful resource for a new student coming to the university. Unknowingly to me, that other groups had been set with a disadvantage, containing less equipment. Which effectively made the challenge a lot more difficult for them.

As we pulled together our ideas, the lecturer seemed pretty impressed with group 1 and 2’s discussion. After coming up with our plan (a handbook with essential information) we were then put to work to create our invention. throughout the making process, we were aware of an un-familiarly behaviour from our lecturer. As he paid a lot of attention towards group 1 and 2 and feeding them a lot of praise. Group 3 and 4 were more or less neglected; they struggled with the tasks as they were unfortunate to have the least equipment to work with.

As we came to presenting our creations to everyone, the inequality between groups became a lot more visual. Group 1 were rewarded the highest score for their project. As each group presented we could see how unimpressed the lecturer was with groups 3 and 4. By this point we could all pick up the lack of patience and negative body language he was giving off, giving groups 3 and 4 the impression of being disliked. By the end, Derek (our lecturer) asked every group how they felt about that task. Typical responses from groups 1 and 2 as they had really enjoyed the task and worked well together. however, the mood seemed to change for groups 3 and 4. They felt very disheartened by the activity because at one point they weren’t even rewarded a score!  By then, Derek finally announce that this was the purpose of the task, his acting skills had paid off as we were all very impressed.

This activity highlighted the importance of equality and the structure of disadvantaging children in a classroom. To be biased towards one group can deflate other children; which can encourage then to give up with their learning. A positive connection between a teacher and pupils is vital for a successful learning environment; this is one of the greatest lessons to take on board while becoming a teacher! 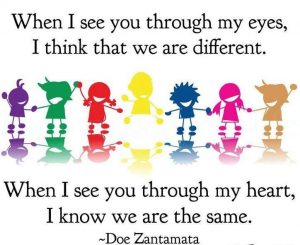 1 thought on “Equality is Key.”