Prior to our input with Richard on science, we were all to prepare a 2-minute science demonstration to show to our group. There were great ideas which can stem great lesson plans for the children in the classroom. This picture shows the “lava-lamp”
experiment, 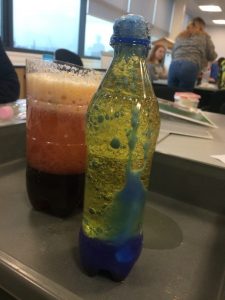 the oil and water demonstrates to the children that materials don’t always mix due to the oil being less dense than the water, this is called “intermolecular polarity”.  Add food colouring for some colour and a fizzing tablet for the bubbles. You can then take about the creation of gas.

Other experiments included the “Floating egg”. so we got to see that an egg does not float in normal water, however, the egg 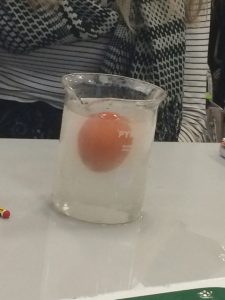 does float in salt water. This can get the children asking why it has happened! children tend to think that its only heavy items that sink but with this experiment you can teach them that it all about the DENSITY of the object compared to the density of the water.

Another experiment shown in my group was the colour chromatography. A simple line drawn by a marker pen on kitchen roll that’s dipped into the water can show the separation of components in a mixture. The mixture separates because its components travel across the paper at different rates, based on their attraction to the paper or solubility in the solvent. You can do this experiment with multicoloured pens and it should show the three pri 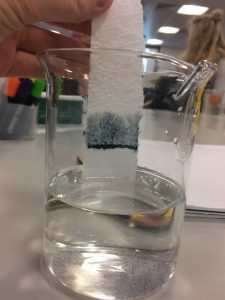 mary colours that are built to make that colour.

In another science lesson, we were thinking about highlighting the importance of fair testing to children. that a test cannot be accurate if more that one variable is changed in an experiment. for this lesson, we were linking unfair testing into other curricular subjects. A good one is in PE children can be given different equipment or resources, some children can be given advantages in order to make it easier which promotes unfairness. T 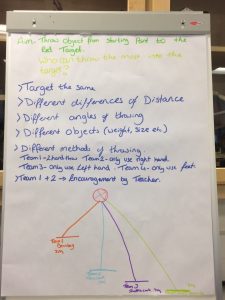 he children would be able to see it a lot clearer if they can identify how it is unfair to do a sport with more than one variable changed. For example, we created an “unfair lesson” for throwing an object into the target. Each group had a different object (varying weights and sizes), they all had different angles and distances from the target and they had different methods of throwing. The children can quickly identify which team were getting more in and why then you can relate the importance to science.