An injured pupil’s video of the P5-7 playing football.

Here are some lovely pictures taken by Mr McBain of our footballers in Carlisle. Whilst the football wasn’t easy against some stiff opposition everyone took part and the team organised themselves really well. Well done to all and thanks again to Mr McBain.

This story made it onto Annandale TV, check it out here.

Six members of our school attended the annual Springfield Primary Football Tournament this week and did their best. They won a game, drew a game and lost two games, but most of all had fun. Well done everyone.

Thanks to Mrs Mannall and Springfield Primary for hosting and organising a great event.

Last term, P4-7 took part in football sessions with Jim Thompson from Queen of the South Football Club. Along with lots of fun warm ups and games the class listened and discussed different topics that young people face when growing up. We all had great fun and would like to thank Jim and the rest of the team who helped out over the sessions.

Brydekirk Primary held its annual small schools competition on Wednesday, and everyone had a great time.

Thanks to all who came and took part. It was a close competition although Canonbie Primary ended up winning – well done.

Thanks also to Mr Simpson for setting up and running the tournament, to Councillor Carruthers for refereeing, to Mrs Robson for administering the tournament and to the Brydekirk Primary PFA for supporting the event with some lovely baking and hot grub. 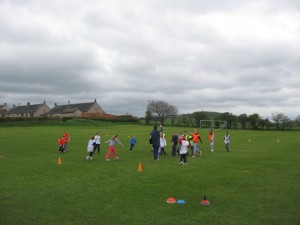 This term the whole school are enjoying football sessions with a local coach and specialist, Ross.

Along with all of the exercise, we are learning skills and techniques through fun activities and games.

Here’s some pics from this afternoon, results to follow:

I am writing about the Springfield Football Tournament which was on Tuesday 17th April 2012 at Springfield Primary School.

The football team had practiced for many weeks before hand. After the coaches Mr. Simpson and Mr. Archibald had gone over everything we would need to be a good football team, then it was time for the tournament.

On the way to Springfield we got lost. Soon all the other teams started following us. Mr. Simpson ended up asking a women pushing a pram where the school was, she told us and was very polite.

When finally got there we set up beside the pitch we were playing on.

When playing Applegarth A, one of the boys in my team went and ran through the most  muddiest patch on the entire football pitch and lost his shoe in the mud. We all laughed when he spent the rest of the game trying to get his shoe back out of the mud.

One of our best goals was the one that one of the girls scored. An impotant thing is that this goal was scored when the team’s captains shot was caught by the oppositions goalie. Luckly the goalie just sent it back when the girl kicked it and it went to the back of the net.

Springfield put on great hospitality and it was an excellent afternoons worth of football and I hope it continues for many years to come because it was great fun and it was really fairly split (when making the catogories).