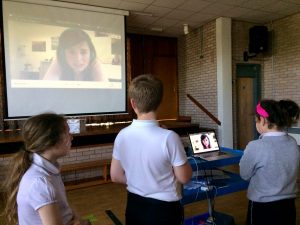 Recently we had a Glow meet with two scientist that are working about Whalesharks mainly around the Maldives. Their names where Alina Wieczorek, and Giulia. They were also telling us about; Plastic  turns into miniature microplastics, and then when whalesharks eat their food, they can be possibly eating tiny microplastics which can damadge their bodies, and it can lead to death sometimes. Whalesharks eat plankton.

The scientists also said that when the Whalesharks eat plankton, the plankton may already have plastic inside of it, so when they eat it they are eating plankton but also some plastic/or microplastics.

There was also something about a Whaleshark and its baby, and the mother was staying with its baby, even though the baby just recently died because of the milk from the mother.The milk was poisoned from the ammount of plastic the mother had recently eaten.

The two scientists  were  from Ireland, and Switzerland. There were also some facts we were given that we already 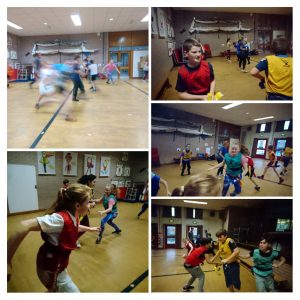 On Wednesday 7th November Mr.Wright came into Port Ellen Primary school to play some rugby and also play rugby related games with us. Sadly it wasn’t the best weather to go outside so we stayed inside in the hall to play rugby, that was the first ever time Mr.Wright came over and we had to stay inside. We started off with running around the hall in different directions, we weren’t allowed to run in circles, we also had to be careful because there was 17 of us in the hall all running in different directions.

We also played a game with a partner, there was 1 and 2, number 1 had to chase number 2 and touch their shoulder lightly so that nobody would get hurt during the game. If No.1 caught No.2, No.2 would then have to chase No.1. Suddenly the rules where changed around a wee bit, now whoever the chaser was had to touch the other person’s shoulders, then there hips.

Then we started getting into a game where we were all in teams, the teams where green, red, yellow and blue. Each team had to go after the other 2 teams and try get their tags, we only had 2 minutes in each round. At the end of the game we had to count up all the tags, In the first round the Red team got 1st because they got 11 tags and the blue team got 10, yellow team got 6 and lastly our team the green team got 8 tags, In the 2nd round our team the green team won because we got 12 and the other teams got less.

Then we all had to get into a line with green at the front then red in the middle then blue at the back and then across from us was yellow with the rugby balls,  Green had to go first and try to get the persons tag so that they couldn’t get past to win, we had to shout TAG when we got a hold of their tag. We kept on doing this but swapping.  It was good fun! 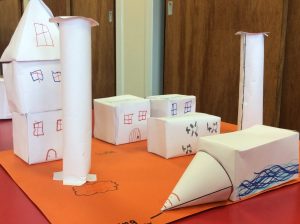 On Friday 24th P6/7 started to make Space Stations for living on Mars. They are all made out of paper they all have to be made from 3D shapes.  Some had oxygen tanks, rocket ships and living quarters. It took P6/7 a couple of days and all of the Mars Space Stations are finished.