Port Ellen primary school in the class p5,6,7 went to the woods at 10am on Thursday. We went there because we were learning about the Mesolithic times. Also we had clans.

The wolf clan, the swan clan, The snake clan and the last one which is seal clan which is the one I was in.

Next when wee got there we had the tarp laid down to lay on it what we did was we laid down and then breathed in and out. After that we got told which way to go to make a den. we found a den. Then we had to find four different leaves. We had to bring some logs down and our packed lunches to the beach to have lunch. First we had to gather some stones and some branches for the fire but some people had to go and gather some branches in the wood.

This year, in November, p5,6&7 had several trips to the Ard because of their new topic, from the book ”Wolf Brother”

The book tell, how people lived in Mesolithic times, but more precisely tell the story of a boy named Torak, who was forced to survive there alone after his father died!

When we went there for first time, we were divided into 4 clans with 5 people each. The clans were: the seal clan, the swan clan, the snake clan, and the wolf clan! There were five different types of people and activities in the clans, who are: leader, story teller, warrior, medic and hunter.

There were different challenges and games, which we made up.  Some of them were:  to make our clan base, to make ours flags, to make some small boat, to make a cave paint, and other.  Finally, we had a war between the clans, in which we had to take the flags of the other clans, without touching us.

We learn a lot of thing about Mesolithic time, and how the people actually survive, with not enough food, clothes or home!

This term we where doing Egg Engineering. We made parachutes and cars. We tested the cars the day after we made them in teams with other classes. Our class made parachutes for our eggs. Nearly all of our eggs lived, only 3 cracked. The egg cars were a success!Four cars passed the finish line on the day. Some of the cars went through the tunnel and some did not because they were too big. 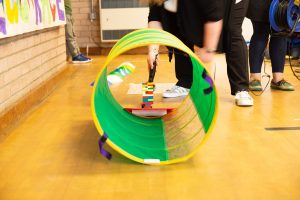