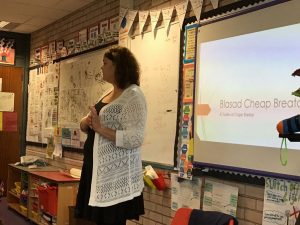 On Friday 31st August  we had an author named Stacey McLean come for a visit.  Stacey came in to our class and had a power point on where she is from; New Scotland also known as Nova Scotia in Canada. Her Gaelic was not the exact same as ours because it is Canadian Gaelic but it was close enough for us to understand.

When Stacey came in I was very excited I think everyone else was to. First we learned some things about Nova Scotia. We learned a game but it was actually a way of teaching the children of Nova Scotia Gaelic. The  teacher would hold up a number of fingers 1-5 and then say something in Gaelic and then the kid would guess. If the kid got it wrong they would not get supper their head will be put on a stake!(According to the rhyme!)

I found it very interesting and then we watched a video of milling. Milling is the Canandian name for Waulking where you try to shrink woolen things, so the girls would sit on the floor or at a table and would grab the blanket or whatever you are milling.   You would grab it and push it in and out in out then they change it so it is in out in then you pass it to the next person and get your next bit. She gathered us on the floor and we milled lots of sheets tied together.  It was fun and we got to sing along in Gaelic.  It was very interesting meeting Stacey.