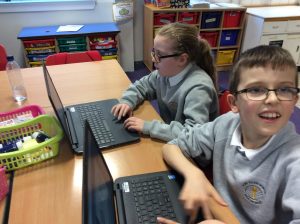 A lot of kids went to this club called robotics club. At this club we programmed sphroes, Marty and Mrs Marty and we also programmed microbits. At the end we invited parents to come and see what we have been learning about and we gave them a shot of programming. We learned that there was a site called microsoft teams witch we used to take quizes. First we took one to see how well we knew about robots and at the end we took another one to see how we have inproved. We had a go at useing lego boost and if you don’t know what lego boost is we will tell you. Lego boost is lego that you can code and play about with. If it is a club next year we are sure it will be even better than this time. Hopefully if it is a club next year everyone has lots of fun. Drew says “I have learned alot of things and I found it very intresting”. I said “It is something I have not done anything like this in my life so I found it hard but I had fun”.