As the end of our year-long project approaches there has been no slowing down here in Port Ellen…. 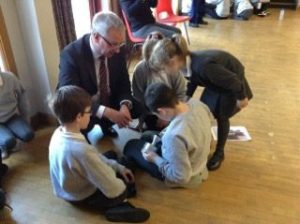 Again, we were delighted to have our mentor, Neil Chattle, visit the school at the end of April.  He toured the school to see what the children had been up to and looking at displays of their work.  The children in nursery with Alison Logan were very keen that he see the boat that they’d built…and check out the tadpoles! In the afternoon Neil introduced all the children to jet engines and let them assemble amazing model engines used by apprentices at Rolls-Royce.  There was lots of adrenaline running in the competition to see which team could assemble their engine  fastest. 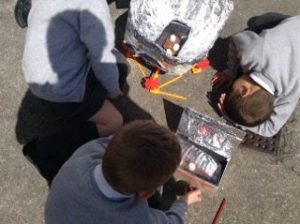 P1/2/3 and Maggie Harrison have been finding out about life in rural Africa.  Having read the story of Handa’s Surprise they have investigated what it’s like to live in rural Africa and how homes there don’t have electricity.  Evie’s mum came in to talk to the class about her experience of living in a remote part of Tanzania and she showed the children a kerosene lamp that people might use to light their homes.  The children learned how solar energy might be helpful.  They built models of African homes and added solar panels and lighting – a great addition to the sand tray which was full of wild animals.  They also built and tested solar ovens!

The Boy who Harnessed the Wind 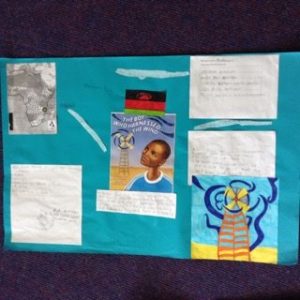 Also thinking about how renewables could be used in developing countries were P4/5.  They read The Boy Who Harnessed the Wind by William Kamwamba. Everyone was amazed that this was a true story of a 14 year old boy. Scott said I was surprised it was a real story. I think the boy was sad when everyone called him crazy but he showed resilience and kept working on his idea. Kate Brown used the story as a novel study and the children worked in groups to understand more about living in rural Malawi. They then watched William Kamwamba as an adult presenting his story to an audience. Kate was amazed about the impact this had on the children in her class and told us I heard one of the children at a family party tell everyone about this amazing real life story of a young boy in Malawi and the incredible things he did to help feed his village.

Kate Brown and the group from P4/5 tested their floating wind turbine, Gael Force, for the Knotts to Watts competition on the day that the Rolls-Royce media team visited.  It was typically wild, wet and windy!  The dads who had been involved in supporting the build were just as keen to see if it worked on the sea….and they were not disappoionted. The group are looking forward to seeing how the device performs in the giant wave tank when they go to Glasgow in June.

This month Jo Clark’s class have focused on climate change, who it affects and how we can help.  They have looked at the carbon footprint of different countries and heard stories about women around the world who are working to help communities adapt to climate change.  Rowan said I was surprised climate change doesn’t affect everyone equally.  Poorer countries are more affected by severe weather than we are, which isn’t fair because rich countries are contributing more to climate change.  Now they are working on inventions that can help save people from climate events around the world.  They created climate change spiral poems for the visit of author and scientist Nicola Davies, who writes stories for children with an environmental theme. 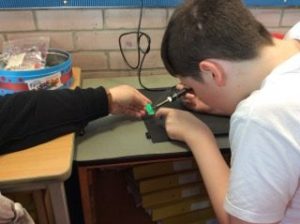 One of the main aims in the project was to raise the profile of engineering among our children. This is already showing some impact. Primary 6&7 carry out Endeavour projects every year; long term projects chosen by the children which are ambitious, look at developing new skills and have to be shared with the local community at the end.  This year our focus on engineering has led to some interesting project choices.  Sophie is currently building a hydraulic robot arm as part of her Endeavour on biomedical engineering.  I chose this project because I think girls should be able to do engineering and I would like a job that helps people.  Taylor has built a model Haynes combustion engine as part of his project on mechanical engineering; To build the model was ambitious and challenging and Donald is learning about electrical engineering and has built a capacitor circuit to store energy for the P123 class solar lights in their African huts.  The same impact is being seen throughout the school.  In nursery Erin asked Alison Logan Are we going to be engineering today? Jo Clark also arranged for P6/7 from Port Charlotte Primary to visit Port Ellen for some paper plane engineering! 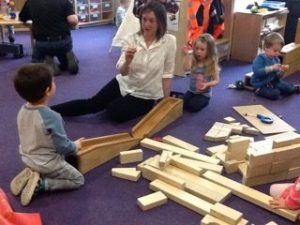 Although this will be the final diary entry we will keep you updated on our upcoming events and continued progress with our project.  George Dean is organising to take P1/2/3 to see the hydro dam, wind turbine and solar panels at the Gaelic College now that the weather is better and these younger children have a better understanding of renewable energy. The team are planning a large community event to share our journey on 29th May and Maureen MacDonald has been in discussion with BBC Alba to come along and film.  Maureen is also in discussions with the council and liaising with the Islay Energy Trust about the possibility of us installing a wind turbine in the school,– a lasting legacy from this project

We have not spent any money this month so we still have £3280.99  in the budget.  Alison and Maggie are planning to to buy some additional construction material for the Pre-5 unit and some solar lighting for the school; remaining money will go towards our legacy projects.