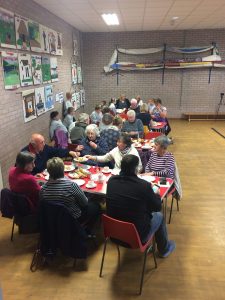 On Tuesday 3rd October 2017 primary 6/7 made a delicious buffet for elders in the local community. Some of the delicious food that were available: Bramble muffins, pancakes, tomato soup, egg sandwiches, nettle soup, bramble meringues, oat and apple cookies, bramble and apple cakes and jam sandwiches. After everyone got welcomed and took a seat the P6/7s told everyone about the feast. While everyone ate some people from the class were on a table with each other and we had to talk to the people on our table. Soon after everyone had had a wee bit to eat the Gaelic choir sang some beautiful songs and some of the choir did poems and solos. After the Gaelic choir sang the Primary School band played some songs. The instruments that were played were the flute and the clarinet. The final thing that happened was primary 1,2 and 3 did some poems and they sounded lovely. Everyone had a great time, enjoyed the entertainment and very much appreciated our lovely foods. 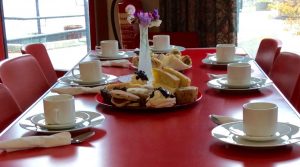