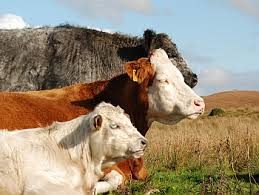 Islay is a beautiful island off the west coast of Scotland, and one of the reasons it is so lovely is because farmers work hard to keep the land the way it has looked for generations, conserving the environment. But the land has also influenced how and what types of farming happen on Islay. As an Island the costs of transport are also an important consideration, as is the weather. All these factors contribute to the difficulties and successes of farming beef, sheep and barley on Islay.

Farming on Islay is very important to  Islay’s landscape and the farmers  that work hard to get paid and have more than just one job but two! The farmers on Islay have kept the landscape as it was years ago. The farming on Islay gives jobs to many people so that they can make money and live their lives as the years pass by.

The main land types found on Islay are rough grazing, grassland, peat bog and moorland.  Grassland is low lying and is used by farmers to grow grass for silage, grass to feed animals and can also be used to grow barley; this is the most useful land for farmers, but in the winter it gets very wet and muddy and can’t be used to keep animals on.  Rough grazing land can’t be used to grow grass or crops, it tends to be hilly with plants like heather, rushes and patches of rough grass.  Animals can graze it, although it is mostly used by sheep.  Rough grazing is useful in the winter because it stays dry, drains well and you can overwinter animals on it.   It can’t be used to grow vegetables or crops because it is stoney and the soil is poor.    Peatbogs are of no use to farmers as animals can get stuck in the bogs and the grazing is too poor.  Farmers on Islay often drain the land to keep it dry enough to grow grass.  Because of the limits imposed by the type of land on Islay, the main farming is Beef and Sheep, with a little barley production.

Islay has a wonderful type of weather for grass which has mainly rain and wind with a tint of sunshine as there is hardly any snow or frost on the island. The normal temperatures varies as seasons pass as in the summer there is more sun and it is not as rainy as autumn or winter as in winter it is mainly rainy and windy but it is still sometimes sunny. The lowest average temperature on islay is 3’c. In autumn the weather is changing to winter and during that there is sometimes gale force winds  and there is about 130mm of rain through the season. In summer the weather becomes less rainy and becomes more sunny.

Islay is an island than can only be reached from the mainland by ferry or plane.  This means farmers have to pay to get their produce off the island and also pay extra to get the equipment and resources they need to farm on the island.  As a result of this farmers on Islay struggle to compete financially with those on the mainland.  For example, fertilizer and concentrates need to be brought over on container ships and unloaded onto lorries.  This means fertilizer and concentrates cost more for Islay farmers. The type of farming that can happen here is also affected by transport; milk, soft fruits and other products will go off when transported for long periods of time so are not farmed on Islay.  However, sheep and cattle are easy to transport over time, and the barley that is grown is sold locally.  So farmers on the mainland have an advantage over famers on Islay.